The Widows' Might
Widowhood and Gender in Early British America

"Conger offers us a new and complex portrait of the colonial widow. Taking care to distinguish ideology from realities and to recognize regional differences in widows’ experiences, Conger shows us the legal, economic, and social impact of the transition from wife to widow. In the process, this richly researched and well written study challenges older, static notions of gender roles in the family and establishes the critical role of widows in the developing colonial economy. Legal scholars, social historians, and economic historians will find this book invaluable to their understanding of early America."—Carol Berkin, author of Revolutionary Mothers: Women in the Struggle for America’s Independence

In early American society, one’s identity was determined in large part by gender. The ways in which men and women engaged with their communities were generally not equal: married women fell under the legal control of their husbands, who handled all negotiations with the outside world, as well as many domestic interactions. The death of a husband enabled women to transcend this strict gender divide. Yet, as a widow, a woman occupied a third, liminal gender in early America, performing an unusual mix of male and female roles in both public and private life.

With shrewd analysis of widows’ wills as well as prescriptive literature, court appearances, newspaper advertisements, and letters, The Widows’ Might explores how widows were portrayed in early American culture, and how widows themselves responded to their unique role. Using a comparative approach, Vivian Bruce Conger deftly analyzes how widows in colonial Massachusetts, South Carolina, and Maryland navigated their domestic, legal, economic, and community roles in early American society. 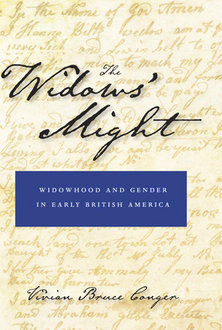