James Swafford received his B.A. from the University of Kansas, his M.A. and Ph.D. from Duke University. A member of the English faculty at Ithaca College from 1984 to 2018, he taught a wide range of courses at all levels, including Introduction to Poetry, Approaches to Literary Study, Ancient Literature, several seminars in the Honors Program (Into the Wild, Science in Poetry, Modern Myth, and Helen of Troy and Elsewhere), and a graduate course on the child in world literatures. His primary interest, however, was in 19th-century British poetry, especially the continuities from the Romantic poets (Blake, Wordsworth, Coleridge, Shelley, Keats) through the writers of the Victorian era. Among the special courses he offered in this field are

Professor Swafford taught in the National Endowment for the Humanities Summer Seminar Program for school teachers. He received both a Dana Teaching Award and an Excellence in Teaching Award from Ithaca College. He also directed the Honors Program at Ithaca from 2001 to 2007. 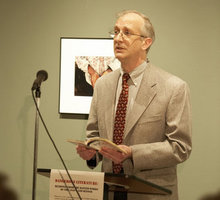