I retired at the end of the 2013/14 academic year, but continue the research.

My research is focused on ecology, behavior, and evolution of water mites (called by various names through the years: Hydrachnellae, Hydracarina, Hydrachnida, Hydrachnidia, Hydrachnidiae).  I was originally interested in the host/parasite relationship, using water mites that, as larvae, are parasitic on insects as a model system.  I branched out into studying loss of larval parasitism in water mites, which has independently occurred more than 25 times but apparently does not persist in any lineage.  Through this discovery, I was able to successfully maintain long-term colonies of several species that lack larval parasitism, which facilitated research into behavior of such species.  In conjunction with my students, we discovered that many species of the genus Arrenurus  used sex pheromones, and that species would typically react to the pheromones of close relatives. Further, we became especially interested in the phenomenon of sex ratio distortion, where certain females would produce almost exclusively female offspring, others produced almost exclusively male offspring, and some produced relatively unbiased clutches.  There are many possible causes: one is where sex-ratio distorting pathogens infect the host organisms and skew the sex ratio for their own benefit, given that many of these pathogens can only be transmitted down maternal lineages.  Subsequently, we investigated whether there were known sex-ratio distorting pathogens infecting Arrenurus spp. water mites, and found species of Cardinium, Spiroplasma, and Rickettsia.   Yet another line of research, I have recently become interested in molecular evolution in this group of mites, particularly involving the COI sequence used for genetic 'bar coding' of species.  Retirement has provided me with much more free time in which to pursue my research on water mites.  I intend to continue for many years to come.

Read about my newest 2020 publication here! 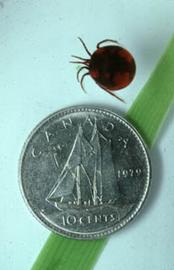 Read about the xix new species, 4 new genera, and a new subfamily!