Raul Palma is an assistant professor of writing at Ithaca College. He earned his Ph.D. in English (creative writing, fiction) at the University of Nebraska-Lincoln, where he also specialized in ethnic studies. In 2017-2018, he was awarded a dissertation fellowship through Ithaca College’s diversity scholars program, which he was able to use to complete his novel and dissertation. Prior to his graduate work and his teaching, he worked in various industries as a sales person--advertising, industrial equipment, luxury goods, and printing services--all while carving out time for writing in the off-hours. Originally from Miami, FL., he has also called Key West, Fl., Chicago, IL., and Lincoln, NE. home. He teaches classes in composition/rhetoric and creative writing, with a leaning toward topics in LatinX Studies, women and gender studies, narratology, and transnationalism.

In the writing department, Palma serves as the faculty advisor to Stillwater magazine, and he coordinates the Writing Contest. He has served as a fiction editor for Prairie Schooner, one of the oldest literary magazines--a quarterly published out of the University of Nebraska-Lincoln, edited by Kwame Dawes.

His work has appeared and is forthcoming in Alaska Quarterly Review, Chattahoochee Review, The Greensboro Review, Smokelong Quarterly, and The Sonora Review. The first chapter of his novel Manteca was distinguished/notable in Best American Short Stories (edited by Junot Diaz), and his short fiction was included in Best Small Fictions 2018 (selected by Aimee bender). His collection In These Cities of Ultraviolet Light was a finalist in Indiana Review’s Blue Light’s Book Prize, and a semi-finalist in the Iowa Short Fiction Prize. 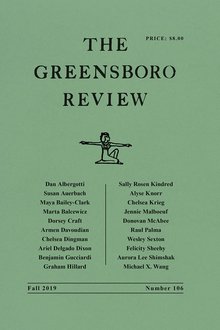