I stumbled into sociology when I was an undergraduate at Washington University in St. Louis. I began my undergraduate career as a math major and pre-med. Very early in my junior year I found myself sitting in a comparative anatomy lab incomprehensively staring at chick embryos. I thought to myself, “I have no interest in this stuff. I have no desire to become a doctor and I can’t stand linear algebra either.” I left in the middle of the lab, marched into my advisor’s office and told him that I no longer wanted to be premed or a math major. My advisor was a bit taken aback but said, “Okay.” We began to talk about what I was doing and what other courses I had taken that I had liked. I was running a tutoring project for elementary school kids from an impoverished suburb of St. Louis. I had been active in various civil rights endeavors, including a trip to Alabama in the spring of 1965 to join the last several miles of the Selma to Montgomery march. I was involved in anti-war efforts. And, I had taken and enjoyed a number of sociology classes. So, I became a sociology major – I could complete the major by taking only a few more courses. I had no plans to continue in sociology after graduation. It was only years later that I discovered that Washington University had a premier sociology department at that time. Faculty members included Alvin Gouldner, Irving Louis Horowitz, and Lee Rainwater. I didn’t take a course with any of them!

I graduated in the spring of 1968 and found a job teaching elementary school in the New York City schools (6th grade at PS 95 in the Bronx). This kept me out of the army since teachers in city schools were scarce and I received an occupational deferment. As difficult as it was, and it was very hard, I found that I greatly enjoyed teaching. In the fall of 1971 I became a teacher and then head teacher at an alternative elementary school in West Lafayette, Indiana. It was a wonderful experience. I learned far more than my kids did. I learned and developed teaching techniques that I have continued to use during 25-years teaching at the college level. Teaching is teaching.

After four years in Indiana, I moved to Ann Arbor, Michigan for personal reasons. I found a job teaching half time in an elementary level Montessori school, and, just for the hell of it, took a few graduate level courses in sociology at Michigan. I had taken an undergraduate course in social psychology and loved it. I remembered that Michigan faculty members wrote many of the articles I read for that course. Thinking that Michigan still had a joint sociology and psychology program in social psychology (they didn’t – it had been disbanded several years earlier), I applied to and was admitted as a full time graduate student in sociology.

I began my professional career in sociology with a focus on the sociology of education and social psychology. Over the years my interests have broadened to include youth and theory. I have long been interested in the use of simulation and gaming as teaching techniques and teach a course that focuses on such devices.

I never set out to be a sociologist, but have never regretted the way the twists and turns of my life brought me to this place. 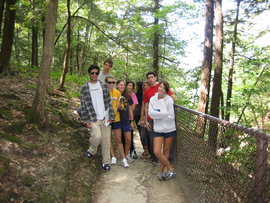 Students in my backyard 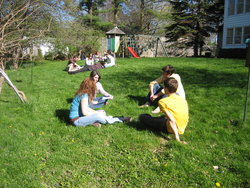 Students discussing a simulation in my backyard.


Each spring I invite students in my "Simulating Social Processes" course to my home for the last class of the semester. We play a few games and then they cook dinner with the ingredients I supply.