A new Steinway concert grand piano—the most recent gift by longtime Ithaca College School of Music supporter Shirley Hockett—will be dedicated at a free concert on Sunday, Oct. 22. Beginning at 4 p.m. in the Hockett Family Recital Hall in the James J. Whalen Center for Music, the recital will feature performances by members of Hockett’s family, with assistance from two faculty musicians.


The Weiss Family Players—composed of Abraham Weiss (bassoon), his brother, David Weiss (oboe), and David’s wife Alpha Hockett Walker (piano)—will join clarinetist Richard Faria and hornist Alex Shuhan in a program of music featuring the world premiere of Dana Wilson’s “Sound Travels.” Wilson is the Charles A. Dana Professor of Music at the college. The concert will also include music by Mozart and Poulenc, a set of pieces for musical saw performed by David Weiss, and a sonata for oboe and piano composed by Chas Hockett, late husband of Shirley.


“The piano faculty from the School of Music, along with Shirley Hockett, piano technician Donald McKechnie, and myself, selected the new Steinway model D concert grand piano,” said Arthur Ostrander, dean of the music school. “We traveled to the Steinway factory in New York to find the piano best suited to the warm, intimate acoustics of the Hockett Family Recital Hall, which was donated by the Hockett family in 2002. We were unanimous in our selection of this particular instrument.”


Ostrander added that the Hocketts’ generosity to the School of Music is evident in the name of the recital hall, as well as the Hockett Library of Ensemble Music. The Hockett family has also endowed a concert series, which this year will bring the Canadian Brass to Ford Hall for a free concert on Tuesday, November 27.


Husband and wife team David Weiss and Alpha Hockett Walker began performing together in 1982. David is a faculty member at the University of Southern California’s Thornton School of Music, the Music Academy of the West, and the Henry Mancini Institute. He recently retired after 30 years as principal oboe of the Los Angeles Philharmonic. Alpha graduated from the Eastman School of Music with performance degrees in oboe and piano. Abraham Weiss has been principal bassoon of the Rochester Philharmonic since 1970. The three musicians are looking forward eagerly to a performance at the International Double Reed Society Conference
to be held at Ithaca College in June 2007.


The Ithaca College School of Music offers some 300 free concerts each academic year. More information on these performances is available by calling (607) 274-3717 or visiting www.ithaca.edu/concerts. 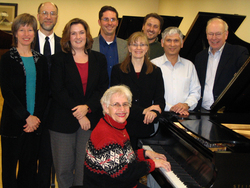 Shirley Hockett seated at the new piano she has donated to the Hockett Family Recital Hall, with the School of Music piano faculty.