Students at the Ithaca College School of Music have become acclimated with tough auditions, challenging juries and performances. But imagine entering an audition where the panel is behind a temporary wall, waiting as you attempt passages in contemporary compositions that are completely foreign to your classical training. This is exactly what students went through in order to audition for the opportunity to travel with Professor Meyer, seven performance faculty members of the School of Music, and the Ithaca College Contemporary Ensemble to perform on a festival tour in St. Petersburg, Russia.

Professor Meyer has conducted the St. Petersburg Chamber Philharmonic in Russia since 2002 but his international influence hasn’t stayed behind what was the Iron Curtain. Meyer has been breaking barriers in his international direction of the St. Petersburg Chamber Philharmonic as well as breaking the divide between students and professors. He offers unique opportunities to challenge students while giving them the confidence and will to succeed as professional performers.

The preparation was not easy. Students had to adjust to the technicality of pieces such as Schoenberg’s Five Pieces for Orchestra, Op. 16 (1914/25), Ligeti’s Chamber Concerto for 13 players (1989) and Radvilovich’s Judah for Orchestra, Chorus, Soloists and Reciter (2008). Along with Judah, many of the pieces played by the students were either world premier performances or Russian premiers. Students were expected to perform as professionals, adjusting the physiology of how they play their instruments to meet the demands of this difficult new music. They also needed to learn how to conceptualize the drama and musical meaning of these challenging compositions. Meyer explained that he was extremely proud and humbled by the level the students attained in their rehearsals and performances, saying “20th century and contemporary music is a whole different landscape is like learning a different language.” Students were able to perform both within the St. Petersburg Chamber Philharmonic as well with the Ithaca College Contemporary Ensemble. The pressure was on the students to perform at a high level because they would be playing among professional musicians including members the of the St. Petersburg Philharmonic Chamber Orchestra as well as Ithaca College professors. These faculty members included Susan Waterbury, violin; Heidi Hoffman, cello; Nicholas Walker, bass; Richard Faria, clarinet; Paige Morgan, oboe; Diane Birr, piano; and Sally Lamb, lecturer in composition, who wrote a new work for the group.

This past tour of Russia is just one of the ways that Meyer and the faculty in the School of Music inspire students. Meyer also provides motivation for his students in his own professional career. This summer, he participated in a series called “Wall to Wall Behind the Wall” at Symphony Space in New York City. The event featured a thirteen and a half hour marathon of music featuring the New York debut of the St. Petersburg Chamber Philharmonic, conducted by Meyer. The performance brought spectators from around the city, and globe, including Ithaca College students and alumni who had performed under his baton. For those who could not be directly inspired by performances, the New York Times and Wall Street Journal both featured rave reviews. For students, seeing the professional achievements of professors outside of the classroom provides ambition for their own careers in musical performance.

As the Director of Orchestras, Meyer works with his students and the Contemporary Ensemble to present real world, professional opportunities. One of the ways in which he does this is to combine students with faculty to simulate a setting of professional standards in practice and performance. Meyer explains, “One of the educational outlooks of the ensemble, and of the School of Music as a whole, is to put faculty and students together performing side by side. This educational and philosophical stance creates an environment where the students learn much more intensely and often non-verbally as they rehearse and perform next to their teachers." 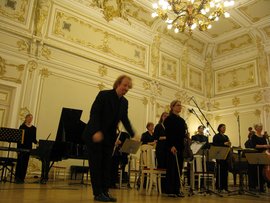 Opportunities In the Music School

Take a look at the different programs that the Ithaca College School of Music has to offer:

Learn more about the Ithaca College School of Music at https://www.ithaca.edu/music/