Paula Murray Cole is an associate professor of acting, voice and movement in the Department of Theatre Arts. Her professional work is centered on the development of rasaboxes, a suite of exercises devised by Richard Schechner. Based on a combination of performance theories, practices and contemporary emotion science, rasaboxes trains emotional awareness and expressivity through the use of breath, body, voice, and sensation.

She has taught performance workshops at New York University, the University of Tennessee at Knoxville, Central Washington University, The Dell’ Arte International School of Physical Theatre, Brown University, Montclair State, Rose Bruford,The Actor’s Movement Studio and The Hangar Theatre Lab Company. She has presented rasaboxes at conferences in Israel, Montreal, Turkey and Singapore, China, and Poland; for the International Society for Researchers on Emotion Conference (2004), the Association for Theatre Movement Educators Colloquium (2005), ATHE (2009) and the RS&PS Conference (2010).

In January 2012, she traveled to Shanghai, China to share rasaboxes work with students attending Shanghai Theatre Academy's Winter Institute, co-sponsored by Brown, Princeton, Yale and New York Universities. In May 2011, she traveled to the Grotowski Center in Wrosclaw, Poland to share the rasaboxes work at the "Making Tomorrow's Theatre" conference. Students and teachers from a variety of international theatre programs, including three IC theatre students, were invited to the center to exchange performer training practices.

She co-authored “The Actor As Athlete of the Emotions: The Rasaboxes Exercise” with rasaboxes co-developer, Michele Minnick, for the book Movement For Actors, edited by Nicole Potter; she contributed a sidebar article to the essay “Rasaesthetics”, by Richard Schechner, now published in his book Performance Theory. She is currently working on a handbook for rasaboxes training with Minnick, Rachel Bowditch and other contributors to be published by Routledge. In 2009, Cole produced the first video recording documentary of Schechner teaching his intensive performance workshop. Over 100 hours of footage will become a digital archive so that scholars and practitioners may see Schechner's exercises as he presented them in 2009.

She has taught acting, coached and/or directed productions at Hofstra University, the University of Illinois Urbana-Champaign, Interlochen National Arts Camp, and the Governor’s Magnet School for the Arts of Norfolk, Virginia.  She has acted at The Alley Theatre, The Houston and Dallas Shakespeare Festivals, Adirondack Theatre Festival, Karin Coonrod's Arden Party in NYC, in Schechner's productions of Three Sisters and Hamlet with East Coast Artists. She performed at The Kitchen (NYC) and Lincoln Center's Outdoor Festival in a piece by choreographer Douglas Dunn and composer Joshua Fried. She worked as the casting director for Paul Ekman's photo sessions of actors demonstrating facial expressions of emotion for use in his training programs.

Her research interests include ongoing research and development of rasaboxes; comparative studies in emotional and psychophysical techniques in actor training practices; the study of contemporary emotion science about the brain, body, and senses relevant to the practice of acting and theatre making. She is currently pursuing teacher certification in the Alexander Technique at the Philadelphia School for the Alexander Technique.

She holds her MFA in Acting from Southern Methodist University and her BFA in Drama from Ithaca College. She is a member of Actors Equity Association, The International Society of Researchers on Emotion, Alexander Technique International and is a Licensed Massage Therapist in New York State. 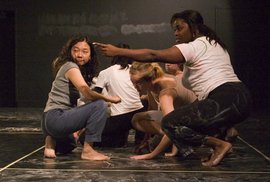 Students working in the rasaboxes