What the Flaherty Taught: Eli Horwatt

Posted by Patricia Zimmermann at 8:30AM   |  Add a comment 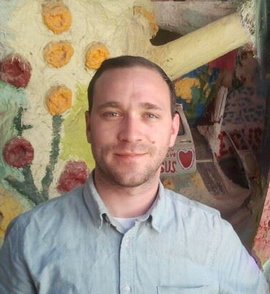 Eli Horwatt is Visiting Assistant Professor in Film and Media Studies at Colgate University. His research explores the intersections of documentary, institutional critique, and experimental cinema. He has programmed for the Wavelengths sidebar at the Toronto International Film Festival, Hot Docs International Documentary Festival, Pleasure Dome, and at Colgate University’s Alternative Cinema series. His writing focuses on contemporary found footage practice, documentary ethics, and appropriation, and may be found in journals such as Framework, World Records, and Millennium Film Journal. His most recent work examines guerrilla projections by The Illuminator Collective in New York City.

The 2014 Flaherty, “Turning the Inside Out,” examined “the state of documentary as it travels between the art gallery, the cinema, and the interactive screen,” according to seminar marketing. At the time, this issue constituted the heart of my doctoral research and a significant part of my film festival programming.

I was ecstatic to be awarded a fellowship to attend. I traveled from Toronto to Colgate University with film scholar Tess Takahashi and former Flaherty curator Pablo de Ocampo. Right away, the fellows met with Jill Godmilow, whose What Farocki Taught [1998] I had seen previously, but whose larger body of work was new, thrilling, and uncompromising. Generous to us fellows yet recalcitrant in her documentary dogma, Godmilow set the stage for the Flaherty’s storied conversations and arguments.

The seminar opened with Godmilow’s Far From Poland [1984], which provoked the audience to erupt into applause as the first frames appeared. It was a kind of nerdy-nirvana to experience it.

Filmmakers I admired participated that year, including Jesse McLean, Johan Grimonprez, Raqs Media Collective; and Hito Steyerl, beamed in via Skype as her daughter was ill. A number of new-to-me films were screened that left me reeling. The Anabasis Of May And Fusako Shigenobu, Masao Adachi And 27 Years Without Images [2011] by Eric Baudelaire transported me so intimately that I felt the dread of the haunted subjects’ lives. Duncan Campbell’s Bernadette [2008] transformed homage into mystery.  His film and others I saw at that seminar found their way into my programming and course syllabi.

An unexpected key issue emerged: a critical look at the currency of the term “essay film” and the rhetorical strategies of artists using documents, historical records, archival materials, and standard talking heads. Many attendees asserted that this format had shifted so much that some entries seemed more like lecture films. They circumvented the open, interrogative, and often surprising logical connections the essay form embodied.

Those rooted in the documentary film world exhibited anxiety towards gallery-based moving image work. Gallery artists mounted a defensive, apologist discourse about the shortfalls of film and video installation. Many agreed a black box would need to be built inside a white cube in order to sustain a gallery screening. These debates raged on through the week of the seminar.

The seminar’s format cannot ever completely fail—curation be damned.

If audiences don’t like the programming, the discussions still produce generative observations and insights into strategies and approaches. When the programming is well received, the most successful qualities of a work bubble up in discussions, crystallizing.

The Flaherty’s intensive and immersive schedule produces a think-tank like focus where a mutual interrogation of ideas germinate into a richer, more pronounced understanding of documentary. Still, a few more breaks in the screening schedule would be welcome.

The seminar came with both catharsis and a few regrets. Highs included being on a dance floor with Tony Conrad not long before he left us.

After the most intense critical discussion, I ate dinner with two filmmakers who had just experienced a less-than-jubilant reception. Their harshest critic sat next to me at the table. The filmmakers shed any defensiveness. A discussion about protest, representation, and the self-mythologization of the Left ensued. Conclusions were made and some consensus formed. Here, I felt the generosity and openness of the Flaherty as an intellectual laboratory of artists and thinkers.

There were a few regrets, such as when I returned to my dorm room exhausted, missing a fun night gallivanting in a nearby pond with new comrades. I didn’t want to bother curators Gabriela Monroy and Caspar Stracke, a lost opportunity. I later connected with them at DocPoint Helsinki. Their intelligence, curiosity, and behind-the-scenes anecdotes overwhelmed me.

In 2014, I was at a crossroads. I was simultaneously finishing my PhD with a dissertation about experimental documentary and post-minimal art and programming for film festivals in Toronto. I wasn’t sure what I wanted to pursue next. In a strange way, the Flaherty impacted my decision. Three years later, I was appointed a visiting assistant professor at Colgate University to teach documentary film classes.

On the second to last day of the 2014 seminar, I collaborated with the other fellows to try to give something back to the Flaherty.

Over the last week during break-out sessions, in private discourse over drinks, or otherwise, conversations between the fellows have generated many critical insights, deft observations and valuable provocations that, so far, have been left unshared with the larger seminar.

We want these comments to reach those best served by them, so here are a few morsels.

How to make a film (borrowed from “Rules of the Road” driving manual):

Thesis number one for documentary practice: films need to be beautiful not just on the outside but on the inside.

Every film should ask the viewer, “Who am I, standing next to this?”

You can only be conscious of yourself when there is an other.

You can’t be in solidarity with yourself.

We’re not looking at the panopticon, This is the reverse shot.

Read yourself into a crisis—then make a film.

Eisensteinian montage can be a Pavlovian proposition.

A film should break vases.

The Flaherty runs on caffeine and alcohol.

I think we should just stay here and never go back to where we came from.