Video Projection at the Flaherty: Ann Michel and Phil Wilde

Posted by Patricia Zimmermann at 4:57PM   |  Add a comment 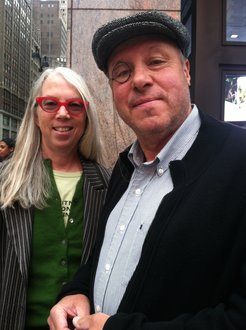 Ann Michel is the founder of Insights International Inc., a production firm specializing in science and educational on-line, TV and theatrical events. She has also served as President of The Robert Flaherty Film Seminars.Philip Wilde is a principal and owner of Insights International, www.electronranch.com. Their documentary Reversing Oblivion (2017) about recovered Jewish identity, lost land, and abandoned property in Poland is currently on the festival circuit.

In 1984, the Robert Flaherty film seminar made its way to Cornell University. Richard Herskowitz, who was then the director of Cornell Cinema, maneuvered to get it there.

Well known in Ithaca, Richard and his wife Jill mounted memorable Halloween costume parties. One party was “Come as Your Parents.” Ann channeled her mother, dressing as a super-dreadnought. At another party, “Come as You Art,” a woman draped Tampax dipped in blue water around her neck and asserted she was in her “Blue Period.”

So when Richard appeared at our Cornell University office and asked if we could help him screen video for a crowd of rabid cinephiles—it sounded like fun. We had never heard of the Flaherty.

At the time we had an office on the fifth floor of Statler Hall, home of Cornell’s famous School of Hotel Administration. To get to our office, you had to push through a set of heavy red doors adorned in white paint with the words “Research and Development.”

The office buzzed with gear and gearheads. Cameras, microphones, television monitors, cables, distribution amps, and mixers crowded the space: everything needed for the creation and display of ½-inch and ¾-inch video. The IBM PC had just been released and the Mac was released that year.

For the video sessions at that year’s seminar, Richard had access to a basement classroom in Cornell’s dreary psychology building, not far from the Cornell Cinema theater where films were screened during the Flaherty week.

We pushed the classroom’s chair-desks into the four corners and dragged in four 25-inch monitors, 80-pounders on tall racks. We draped the floor with cables. The monster monitors did not match and they made the room hot. For video presentations twenty to twenty-five people crowded closely around each monitor. Back then, fewer than eighty people attended the seminar.

We showed Meredith Monk’s Ellis Island [1981] that week. Showing video to a large group in the early 1980s wasn’t always easy, but her video and the way that we showed it were a success. We were now part of the projection team.

Lovable, formidable, old-school tyrant, film librarian D. Marie Grieco programmed that year. She showed a plethora of short films and videos, constantly rearranging the program on the fly. When his screening times were changed, Bruce Conner had a meltdown on Phil’s shoulder.

In 1985, curator and historian Deac Rossell was the programmer. The Flaherty had found a new home at Wells College, about thirty miles north of Ithaca. We had full use of their lovely old grand dame theater with its thrust stage, generous apron, and orchestra and balcony seating.

Gorgeous 19th century three-story windows graced both walls of the theater. We used many fifty-foot rolls of black garden plastic to insure the blackout needed for projection during daylight hours. It was August and with air circulation cut off, the theater was hot. Sometimes, we brought in factory-sized fans and battled their noise. Wells College sits on the shores of Cayuga Lake, one of the narrow, forty-mile long Finger Lakes in central New York. The swimming was excellent and lounging on the dock, between or after screenings, offered daily relief from the heat.

The projection booth at Wells housed two finicky carbon arc 35mm projectors (the same projectors William Randolph Hearst had installed in his castle), gamely manned by projectionist Michael Grillo who had worked with us at that original Cornell seminar. The 16mm projectors were ancient too, and it was a continual battle to keep them working. We supplied the growing mountain of video playback decks in formats such as Betacam, Betacam SP, PAL, SECAM, ¾”, Hi-8, VHS, Super-VHS, then later, DVCAM, mini-DV, and DVD. At some point we rented a theatrical sound system for the week.

Eventually, we teamed up with Richard Herskowitz to share a Sony multi-standard video projector. The Flaherty used it for one week in the summer. Cornell Cinema used it and stored it for the rest of the year.

In 1986, seminar programmers Tony Gittens and Linda Blackaby screened plenty of video, an important turning point for the seminar. Very politely, they provided us with a long list of shorts to screen, with almost no time for preparation. We balked. They discovered that we were unpaid help. In time, we arrived at an understanding with the Flaherty about how to plan the video screenings, and our role came to include a stipend, plus food and a dormitory room.

By 1987, the Flaherty seminar experience had become our summer camp, and in 1994 Jason Livingston, then a Cornell University student, joined our team.

For us, one of the most memorable events was video artist and experimental musician Steina Vasulka’s outdoor walk-through installation, a total surprise for seminarians as they left the theater that night in 1996. We’d set four video projectors on their sides, turning them ninety degrees or more so images of waterfalls ran sideways and geysers shot downward. We used bed sheets for screens to create both front and rear-screen projection effects that combined with the shadows of passersby. Miraculously, the summer rains stayed away that night.

For both of us, the Flaherty has meant much more than just the films and the formal discussions about them. Even at our first Flaherty we noticed that there was plenty of time to meet people and discuss almost any aspect of our art, our careers, and our lives with people who soon were to become lifelong friends.

Later when, as a member of the board of trustees, Phil helped organize and administer the Flaherty seminar in Israel, the people of Kfar Blum, our host kibbutz, understood the Flaherty’s informal gemutlicheit and embraced it immediately. This was something that Ann encouraged when she became president of the board.

We remember swimming in Cayuga Lake with George Stoney; sitting on the terrace late into the evening with Eric Barnouw; helping Bill Sloan keep up with the early rush for drinks at Bill’s bar, even before it became “Bill’s Bar”; convincing Frannie Flaherty, Robert and Frances’s daughter, to stay up and dance to some pretty good rock and roll; and realizing that the delightful woman we’d just had lunch with was Meredith Monk—knowing that we’d be showing Ellis Island the next afternoon and confident that it would look really good!