Posted by Patricia Zimmermann at 3:29PM   |  Add a comment 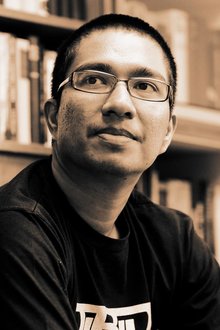 Amir Muhammad is a Malaysian book publisher, writer and occasional movie-maker. His films are usually documentaries, the latest being Kisah Pelayaran ke Terengganu (Voyage to Terengganu) [2016]. In 2011 he founded Buku Fixi, a pulp-fiction publisher that has since produced over 200 books. He has also helped to produce shorts by new filmmakers, including those based on the stories he has published.

I was in the Flaherty of 2006. I have not been back to America since.

I don’t mean to say that my experience at the Flaherty was so traumatic that I vowed never to set foot on US soil again. It wasn’t like that at all!

I remember Flaherty as a mostly pleasant blur. But it also made me feel I should visit other places too.

There was so much whiteness around at the Flaherty.

Several times while listening to the discussion, it occurred to me that I had been taught to believe that when white people talk, they must be talking from a position of authority or knowledge or, at the very least, wit.

Malaysia is a former British colony (or protectorate, if you prefer) where anything associated with England (the other parts of Britain didn’t seem to feature much) are thought to be the bee’s knees.

People of my generation and those who are older grew up reading the books of Enid Blyton, even though we mostly had no idea how much fried rice a half-crown or a shilling would actually get us in real life. Thankfully, we were sensible enough not to crave English food.

Among the mostly Anglophilic chattering classes, life would grind to a half whenever a new Windsor royal wedding was in the offing.

Every dodgy upper-middle-class Malaysian seeking to evade media and legal scrutiny back home will invariably be revealed as “holidaying in London.”

Younger Malaysians don’t have an automatic link to the former Empire, but this situation is simply because the juggernaut of American soft power overwhelmed us. To be American was to be not only young and restless, but also bold and beautiful, and then fast and furious and all sorts of sugar-rush adjectives.

When watching a movie where a white guy trains his guns or knife on a non-white antagonist, the association is clear: whiteness is not only mightier but right.

And this situation explains why white people who work in Malaysia are dubbed by employers as “expatriates,” while non-whites are designated as “migrant workers.”

Back to the Flaherty Seminar. After I screened my docu-fiction film The Big Durian [2003], which references the Petronas Twin Towers of Kuala Lumpur, a white American woman asked me if I had been thinking of the New York City Twin Towers. I was gobsmacked. The Big Durian was about Malaysian politics during the first premiership of Dr. Mahathir Mohamad (1981-2003). The Petronas Twin Towers, fully completed in 1998, were indeed emblematic of that era.

When I replied no, she pressed on. She posited rather confidently that the image of the World Trade Center must have been playing in my mind. I considered retorting “I was thinking of the KL ones, as they are still standing,” but my attempt at black humor may have been #TooSoon. So I just repeated, “No.”

The other title I screened, Lelaki Komunis Terakhir (The Last Communist) [2006], a road-movie sort-of-biopic about the exiled leader of the banned Communist Party in Malaya, was thankfully greeted with less befuddlement. This is because it had a few cheesy songs. Cheesy songs are always good to disarm people.

There was another white comment about John and Jane [2005], Ashim Ahluwalia’s film about a Mumbai call center. The speaker uttered something about Ashim’s film along the lines that “it was like Bollywood.” This was a documentary that was consciously stylized to look like a sparse science-fiction film. Hard to imagine a less Bollywood production, no?

If I were to ever visit America again, I would need to apply for a new ten-year visa and explain to the embassy officer why I want to go. People far more qualified than me have been turned down.

One factor the embassy officers consider is the countries the applicant has visited in the past few years and the purpose of the travel. Some of the countries I have visited or plan to visit are those that may not seem friendly to the current American political establishment (insert joke about Russia and North Korea here). Do I really feel like justifying myself to these officers? No, I do not.

I want to visit places I’ve never been to before.

In the dozen years since that Flaherty, I have visited at least a dozen countries for the first time— including those that are geographically close, such as Cambodia, Laos, and Myanmar, but so remote in terms of contemporary cultural influence they may as well be on Mars. Although I travel mainly as a tourist and sometimes with a film-festival or book-fair badge, I am humbled to realize there are so many languages I will never be able to learn. (I am slow).

My favorite line from that 2006 Flaherty was when Vittorio de Seta, the Italian film director and screenwriter known for his poetic short documentaries about everyday people in Sicily and Sardinia, replied to a questioner in the post-screening discussion. He referred to an actor (whose name I can’t recall, but who was really handsome), with the observation that “Like most actors, he was not very bright.”

I have quoted this line of Vittorio’s a few times, sometimes to people who, by virtue of their profession, didn’t take too kindly to it. (I just googled de Seta and found out he died five years after that seminar. But the utterly bland Sharon Lockhart is unfortunately still alive and creating those white-bread art pieces.)

However, my favorite moment from my entire stay in America came when I conversed with a homeless Filipino man in a New York City park.

I can’t remember what led to our exchange, but he told me the Tagalog word for butterfly was paru-paro. This word was beautiful because the Malay word paru-paru means lungs. And lungs are shaped like a butterfly. Perhaps this was not a case of faux amis, as the two languages are related.

In fact, the Philippines and Malaysia have much in common (with the cultural imperialism of Catholicism in the first and Islam in the other). I had spent maybe ten times the number of my life’s days in the US compared to this neighboring Southeast Asian country.

I am typing this story in Korea. In September, I will be going to the Philippines. When they talk among themselves, I don’t understand Koreans or Filipinos. But it’s great to listen to other people talking.