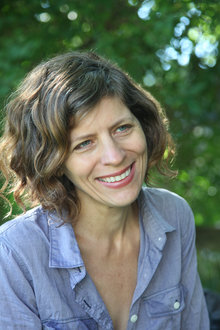 Jacqueline Goss is a filmmaker. Her work includes The Observers [2011] a feature-ish length portrait of a weather observatory on the windiest mountain in the world and The Measures [2014], an essay film made with artist Jenny Perlin about the history of the metric system and so-called invention of the meter. A native of New Hampshire, Goss is a 2008 Tribeca Film Institute Media Arts Fellow and the 2007 recipient of the Herb Alpert Award in Film and Video. She teaches in the Film and Electronic Arts program at Bard College in the Hudson Valley of New York.

My first encounter with a Flaherty Seminar must have been in 1997 at Ithaca College.

I was enrolled in an MFA program in Electronic Arts at Rensselaer Polytechnic Institute (RPI). Along with my teacher, media-artist Branda Miller, and fellow grad student Julia Meltzer, I drove over for the weekend-long “Digital Flaherty” seminar co-programmed by Michelle Materre, then executive director of the Flaherty Seminar, and Patty Zimmermann, a documentary theorist, historian, and writer—and a professor of screen studies at Ithaca College.

I remember that I saw Measures of Distance [1988] by Mona Hatoum for the first time there. This formally simple but beautifully complex work based on images, letters, and audio recordings made by the artist and her mother became a staple in my media production teaching at Bard College.

At that intense and compressed seminar, Patty Zimmermann’s rapid-fire lecture on Nanook of the North [1922] served up a revelation. She staged a series of curtain draws: the fake igloo, the casting of Robert Flaherty’s Inuit lover as the wife of Nanook, the re-enactment of a walrus hunt on the ice, the fox hunt with the dead fox.

Patty’s post-screening discussion with Erik Barnouw, the author of Documentary: A History of the Non-Fiction Film and one of the key figures in the history of the seminar, applied a strange kind of sealant to the seminar’s proceedings. She fired out a takedown of the eponymous white male “master”—and I loved it.  How great it was for me to transform this complicated, flawed, but profoundly inspiring film into fuel for serious and meaningful discussions about the complexity of making moving images.

Two years later, RPI hosted another weekend “Digital Flaherty.” At this seminar, my revelation was Kevin and Jenn McCoy’s work and its connection to and deconstruction of traditional storytelling. Their reworking of a pivotal scene from Godard’s Weekend [1967]as looped media in an installation environment sparked so many ideas about ways in which narrative can unfold. Their references Vladimir Propp’s writings on folklore and fairytale became crucial to my thinking, teaching, and creative work.

In 2006, almost ten years after that Ithaca College seminar, programmers Ariella Ben-Dov and Steve Seid invited me to show my video pieces Stranger Comes To Town [2007] and How to Fix the World [2004] at the seminar at Vassar College. These two works use animated characters to illustrate interviews with real people. Knowing the Flaherty conventions of close scrutiny and straight-up criticism, the invitation pushed me to make my work as strong as it could be.

My very first encounter there was Adele Horne, the director of the powerful documentary Tailenders [2005].  We were in an elevator. We eyed each other. We tried to figure out if the other was slated to present work or not. Later, Adele screened an untitled, 16mm film that was later to be called 15 Experiments on Peripheral Vision [2008]

The mystery about, “What will we be seeing in this program?” seems deeply embedded in the seminar’s history. It is fundamentally so cool. Think about some of your all-time best film viewing experiences. I bet at least one of them was a blind date where you knew nothing at all about what you were going to watch. It’s the same for movie watching on airplanes: you do not arrive with the usual set of critical lenses. You’re open in different ways to what you might watch.

Many revelations materialized for me in 2006: Ashim Ahluwalia’s John and Jane Toll-Free [2005], a documentary about Indian telemarketers for American companies in Bombay; Ben Coonley’s killer PowerPoint and kara-oke videos; Mercedes Alvarez’ inspiring film El Cielo Gira [The Sky Turns, 2004]; Nancy Andrew’s perfect blend of live action, puppetry, and animation in the films The Haunted Camera [2006] and Monkey and Lumps [2003]. Andrews remains one of my favorite filmmakers ever—a witty, multi-talented craftsperson with an uncanny ability to make the best sound/image combos you’ll encounter. Totally under-appreciated and under-recognized.

We watched Vittorio De Seta’s beautiful films about fishermen in Italy Fescherecci [Fishing, 1958] and Contadini del mare [Peasant of the Sea, 1955] in a dark theater while construction workers loudly labored outside. This juxtaposition prompted a lively discussion about the romanticization of labor on the screen, but the complete dismissal of it off-screen.

These discussions where people feel safe to passionately argue and to disagree constitute the heart of the Flaherty Seminars for me. Sadly, I think these kind of honest intense conversations are becoming a rarity. We still need them, even more now, in the Trump era and what feels like the shutting down of debate.

At the Flaherty Seminar, you can quarrel with another viewer, and may walk away to grouse, but you will see the same person the next morning at breakfast. The conversation will move forward because you will be there for several more days. And there will be more movies to weave into it.

Oddly, these other screenings and discussions billow as much more salient to me now than any memory of the screening of my own work. Only one memory remains for me: Sally Berger, then assistant curator of video at the Museum of Modern Art, skipped my screening. I was crushed.

At Vassar, we watched films for seven days from 10:00 in the morning until midnight. How did we do that?

What a tendon stretch! What a gift.