Tagged as “Thinking Through Digital Media” 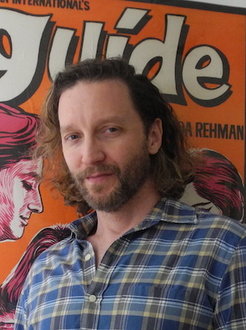 Dale Hudson teaches in the Film and New Media Program at New York University Abu Dhabi (NYUAD), where his research and teaching focus on globalization and culture to frame questions on transnational/postcolonial migrations, environmentalisms, and structural inequalities. He is author of Vampires, Race, and Transnational Hollywoods (2017) and co-author with Patricia R. Zimmermann of Thinking through Digital Media: Transnational Environments and Locative Places (2015).

At my first Flaherty Seminar in 2006, I was asked to sit in a circle with the other participants to introduce ourselves. Each person opened with a numerical inventory of how many seminars they had attended.

I had just returned from India. I wasn’t sure whether jetlag distorted what I was hearing or it if these statements were really being uttered in public.

Rumors swirled in screen studies circles that the seminar was cultish and debates vitriolic. I remember feeling that the seminar seemed like a cross between a first-year seminar at a university and a 12-step program for lost souls seeking reorientation.

The seminar developed into something else: a vibrant space for the challenge of having one’s expectations disrupted.

I found myself addicted to the ritual of awaking each morning for three screenings of unannounced films and videos. When I attended the seminar again in 2007 and 2008, I remember feeling emboldened that I could announce to newcomers that it was my second or third Flaherty. I now understood how the seminar worked.

My colleague and now coauthor Patty Zimmermann had encouraged me to attend. She’d even found a way for me to get funding from Ithaca College. She also shared that the design of the seminar owes more to Frances Flaherty than to her husband Robert. I mused, how typical, a woman does the work and a man gets the attention.

I thought about how Alice Guy-Blaché films are not taught as widely as Georges Méliès films. I recalled that her role in developing film as a narrative medium had been largely forgotten until feminist scholars (all women in this instance) recovered this repressed history.

Patty revealed that in the film studies courses at Ithaca College, she and Gina Marchetti had adapted Frances Flaherty’s strategy of eliciting responses as free from preconceptions as possible.

I was part of the film studies team at Ithaca College with Patty. We distributed syllabi that included only the titles of what would be screened. No place of production. No year of production. No running time. No language or format. And certainly no director’s name.

Although the first year film students in this large lecture class could search online to learn more about the films, few did. They all seemed to find it more fun to arrive without expectations, mesmerized by the provocations to see and to hear and to think and to immerse in the unknown.

My experiences at my first Flaherty rewired my own lingering preconceptions.

I bonded over discussions with Mahen Bonetti, Amalia Córdova, Carlos Guittérez, Roger Hallas, Anna Siomopulous, Sharon Lin Tay, Chi-hui Yang, and others. No matter what was screened or what was said at the large group discussions, the seminar solidified our commitment to voices academia and film culture marginalized, discredited, or ignored.

I also met artist-intellectuals whose work I studied in graduate school or had taught in classes, such as Ursula Biemann, Vittorio de Seta, Mahamat-Saleh Haroun, and Moussa Sene Absa. I “met” Bahman Ghobadi live via Skype. He had not been able to secure a visa to enter the United States.

For me, the smaller discussions were fortifying. The big discussions were sometimes intimidating, often frustrating, and occasionally pointless. But they were always part of something larger that was unequivocally inspiring.

Although I have not been able to attend my fourth Flaherty, I look forward to doing so. I hope that a Flaherty might one day be held a little closer to where I live. Anywhere in the Middle East, Africa, South Asia, or even East Asia would be closer than central New York. I have not found another event that rivals it.

After three seminars, I am addicted to screening media in classes and public programs without advance framing. I am addicted to having my assumptions proven incomplete and my preconceptions rendered incorrect.

I give thanks to the brave women (and men) in the history of The Flaherty Seminar, partisans for an independent cinema who made this way of knowing the world possible for so many generations of seminar participants.

The Flaherty Seminar pushed me to think in unanticipated and unexpected ways. I am so grateful to Patty for encouraging me to attend my first seminar and am eager to read the seminar’s history that she and Scott MacDonald have painstakingly assembled after a decade of research.

The Flaherty is a productively disunified and unruly experience.