Posted by Patricia Zimmermann at 9:02PM   |  Add a comment 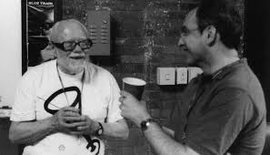 Bill Sloan and Steve Montgomery at the Flaherty Seminar

Patricia R. Zimmermann is Professor of Screen Studies, Ithaca College and codirector of the Finger Lakes Environmental Film Festival.  She is coauthor with Scott MacDonald of The Flaherty: Decades in the Cause of Independent Cinema (2017). Her most recent books include, with Dale Hudson, Thinking Through Digital Media: Transnational Environments and Locative Places (2015); Open Spaces: Openings, Closings,  and Thresholds of International Public Media (2016), and, with Helen De Michel, Open Space New Media Documentary: A Toolkit for Theory and Practice (2018), among her many other books on documentary, amateur film, and new media

If you ever took a university film studies course, you’ve met Bill Sloan.

If you are film professor, you worked with Bill Sloan.

If you ever watched classic cinema or documentaries at a film festival, you sat with Bill Sloan.

If you ever borrowed a DVD from a public library, you know Bill Sloan.

For decades, Bill Sloan served as the film librarian and curator at the Museum of Modern Art (MoMA) Circulating Film Library, appointed in 1980 after a stint at the New York Public Library. His wide-ranging vision of international art cinema, American independent cinema, documentary, and experimental film infuses this influential collection. Festivals, museums, and universities around the world depend on it.

With his sharp instinct for films that offered significant breakthroughs in form or content, the MoMA collection contributed a major building block for the emerging academic discipline of cinema studies. It not only set the standard for developing film collections at libraries, but also staked the claim that film and video were as important as books.

I have always conjured Bill as one of those rare and special shamans of cinema who hovered in some mystical meta-mode that knew where you needed to go before you got there.

While his white hair and beard floated around his always-smiling face like cumulous clouds fluffing an azure sky, his black glasses summoned a counterpoint. They seemed a metaphor for his ability to focus on what mattered in cinema.

I first met Bill at the Flaherty Film Seminars in 1980, early on in my career as a screen studies scholar when I was a University of Wisconsin graduate student. By then, he had been attending for two decades.

At that time, I suffered from a very bizarre delusion that the holy trinity of films, filmmakers, and theory exclusively defined film culture. At that first seminar I attended, Bill introduced me to the idea that librarians at museums and public libraries who purchased, collected, and screened films built a field-sustaining infrastructure supporting independent cinema. Across the decades, he had cajoled many librarians to attend the Flaherty. I remember he also insisted that audiences matter as much as the films, an idea that jolted me back then.

Graduate school pummeled me to take up arms as a partisan fighter defending the one form of cinema I felt mattered the most politically—documentary.

In contrast, Bill’s view was more expansive, a galaxy of practices and approaches. He was curious about all films, all genres, all periods. I imagine he considered this strategy a way to trek through many different universes of approach, content, form, style. He possessed that rare gift to find something marvelous in all that he saw. His attitude influenced how I teach film, with shorts dialectically juxtaposed with features.

His pluralist, wide vision of cinema materialized decisively in his programming with Nadine Covert, another film library world luminary, in the landmark 1972 Robert Flaherty Film Seminar. They imported a concept of heterogeneous films jostling against each other to galvanize a combustion of ideas. This aggressive curatorial strategy, channeling Amos Vogel and Cinema 16 from an earlier era, has influenced legions of programmers and professors in the half a century that followed. Bill and Nadine concocted a tempest of diverse filmmaking styles in the works of Les Blank, St. Claire Bourne, Lianne Brandon, Stan Latham, Marcel Ophuls, Yasujoro Ozu, Ousmane Sembene. In 1979, he programmed again, showcasing radical Dutch documentary filmmaker Joris Ivens.

Many know Bill from Bill’s Bar, mounted each year at the Flaherty. He assembled this jerry-rigged, speakeasy-like bar with a folding table, plastic pails for ice, and a glass jar for donations for libations. It took me many years to decipher why he always worked  behind the bar. Literally and figuratively, I suspect he loved serving the next generation of filmmakers, programmers, and scholars. As he poured these young seminarians cheap chardonnay in clear plastic cups and plied them with stale pretzels, Bill connected with each of them. Their urgencies and obsessions delighted him.

Bill impacted me even more profoundly as I plunged into what felt like an endless dark pit of historical research for Scott MacDonald’s and my The Flaherty: Decades in the Cause of Independent Cinema (Indiana University Press, 2017).

Because he served as President of the Flaherty Board from 1974-1977, I interviewed Bill’s four times. We talked about his career as a librarian, his programming and trustee experiences, the evolution of film culture, the importance of the seminar for both its devotees and the field. He proclaimed resolutely “there’s nothing like the Flaherty anywhere.” He argued for its irrefutable impact, but also relished detailed nasty gossip about various trustees and seminarians whose hardline, narrow positions he found despicable, even thirty years later.

When I first approached him, I promised the interview would only require thirty minutes for some historical fact-checking. Every call flooded to two hours. Tales cracked out like lightning in a thunderstorm, a contrast to what many assumed was his quiet demeanor. I wrote furiously in my notebook to capture his labyrinthine stories and the textures of his passionate advocacy for the Seminar so I could figure out the next question that archives could not answer.

He unleashed a hurricane of films, people, debates, love stories, board decisions, disputes. He wanted to be sure I knew who had affairs with whom, who was difficult and harbored selfish agendas, who had a good soul.

As I listened, it became clear, like patches of blue sky erasing storm clouds, that he found the debates that cut through the people who migrated to the Flaherty to argue about cinema energizing, important, vital. I suspect, for him, their ferocity ripped the roof off old structures to expose new cinematic terrains below.

Bill was truly the wizard of international independent cinema, the man behind the screen and behind the scenes who brought all of us into a more capacious world of cinemas we never could have imagined—or gotten to-- without him.