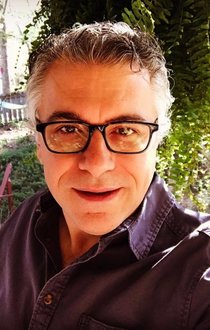 Simon Tarr is associate professor of art at the University of South Carolina’s School of Visual Art and Design. His films have screened in hundreds of film festivals on every continent. He creates live video shows and immersive environments, with performances at Carnegie Hall, LaMaMa, and around the world from Tokyo to Cairo. He is currently touring with Blood Lust of the Wolf, a live remix of Robert Flaherty’s Nanook of the North. His work is available on at his web site http://quarknova.com, and on Amazon Streaming.

Like everyone else in graduate school for film and media, I had heard many stories and rumors about the Flaherty.

The post-screening seminar discussions with filmmakers I idolized like Trinh T. Minh-ha, George Kuchar, and Ken Jacobs constituted the stuff of legend. As colleagues in film and media recounted numerous Flaherty intensities and flare-ups to me, I must admit that I assumed that these oral histories had blossomed into exaggerations as they passed from person to person.

However, as I read lively discussion transcripts edited by Scott MacDonald in Patty Zimmermann and Erik Barnouw’s epic quadruple issue of Wide Angle [1995], it became clear these stories were not exaggerated. The Flaherty loomed larger than life.

Years later in the autumn of 2001, I started my new faculty job as an assistant professor of cinema production at Ithaca College. I learned about an event happening in November at Rensselaer Polytechnic Institute (RPI) in Troy, NY, only three hours northeast of Ithaca. It was advertised as Digital Flaherty. I was intrigued.

In that period, attaching the word “digital” to any concept, practice, or event signaled an attempt at transformation. This seminar would adhere to the longstanding Flaherty ethos—an intense, shared engagement with works, makers, and participants.  But it would be shorter in duration and focus on work that was, for lack of a better term, “digital.” In this context, “digital” meant artworks existing only within a digital framework (video games, VR, code art) rather than using digital tools to facilitate analog workflows such as a digital editor or digital effects.

My anxiety mounted as the seminar approached.

Digital Flaherty seemed like a great opportunity.  The stories I had heard of intellectual battle royales invaded in my psyche. I feared that I would be discovered as a fraud. Or worse, identified as Just Not That Smart.

I rode to the seminar with Patty Zimmermann, my colleague in my new Department of Cinema and Photography. I was nervous about driving with her as well. We ended up talking so much about the upcoming event that we hardly ate the salt and vinegar potato chips we acquired for the road.

September 11 was fresh in everyone’s memories. It cast a pall over nearly everything in that post 9/11 period. However, the intellectual and artistic electricity of the Digital Flaherty seemed to dissolve all those the social and political uncertainties by gathering people together to explore the unknown through conversation.

The imagined combativeness of the seminar was nowhere to be found. We did not just discuss media, we talked tactics with Amy Goodman from Democracy Now! and Graham Harwood from the British new media collective Mongrel, which specialized in digitally-based artists projects with low income and marginalized groups.. We initiated pranks and were deliberately provocative while playing Eric Zimmerman’s Sissyfight 2000 [2000]. Afterwards, we spent hours discussing and arguing in small groups trying to figure out why.

My transformative moments came from two guests at that Flaherty: video artist and activist Alex Rivera, who was in a residency at RPI that coincided with the seminar; and VJ and activist Art Jones.

One evening at the seminar, Rivera’s class had taken over a large open space in downtown Troy. They transformed it into a chaotic maze of surveillance with huge movable projection surfaces that continually destroyed and rebuilt while impossibly loud drum-and-bass vibrated the building.

As I navigated the show (Or was it an installation? Or an immersive experience?) trying to establish my bearings, I entered an ad hoc atrium built into the art space. A ring of data projectors aimed at the surrounding temporary white walls, pointing out like spokes on a wheel.

I recognized the projected images from Flaherty’s Louisiana Story [1948]. A bank of computers and projectors distorted and recontextualized the images. At the center of this technological confluence stood Jones, manipulating madly on a couple of laptops like a wizard or a shaman. It took me a few moments to understand that everything I was experiencing was being made and remade live in the moment—the space, the sound, the video, myself, everything.

When I returned to Ithaca, I started experimenting with live VJ performance. I even had the good fortune to perform with Art Jones a few times at special music and projection events mounted in the Roy H. Park School of Communications at Ithaca College: Within Our Gates Revisited [2005] and Tet Vu Lan: Dismantling Empire [2006].

I ended up mostly leaving experimental analog filmmaking. As an artist, I transitioned almost completely into expanded cinema and live performative media, using computers with mobile and haptic interfaces to create immersive visual experiences in real time in front of audiences.

This new work led to collaborations that I could not have foreseen in my previous artistic life. I designed and performed media for plays at 3LD Art and Technology Center with the Talking Band Theater Company, the American Composers Orchestra, and composer Dan Visconti at Carnegie Hall. I created solo live cinema experiences such as my current touring show, Blood Lust of the Wolf (http://quarknova.com/blood). For this show, I take Flaherty’s Nanook of the North [1922] and remix it into a fugue state about race, ethnicity, and exploitation. While performing the show live, I detect audience reactions, sensing their level of engagement and even their resistance. I modulate my performance to enter into conversation with the audience, provoke them, and generate more substantive dialogue.

Before the Digital Flaherty, I gave only cursory lip service to moving between and across disciplines. Afterwards, I realized that connections across different ideas, modes, and technologies galvanize everything I make, think, and do. The spark from a few days in Troy, NY ignited fundamental changes in my thinking. In some ways, my unusual mid-career-acquired PhD in information science traces back to those explosive cross-disciplinary connections started at Digital Flaherty.

Revelations are hard to come by. Those artists and thinkers I interacted with at Digital Flaherty long ago in Troy afforded me a privilege beyond a mere technological awakening. They redirected my artistic practice and opened up a new space of epiphany.