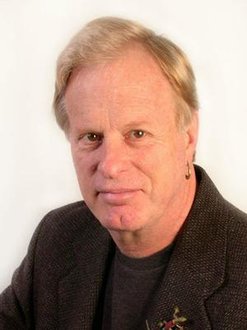 Scott MacDonald has written/edited many books on independent cinema, most recently Avant-Doc: Intersections of Documentary and Avant Garde Film (Oxford, 2015), Binghamton Babylon: Voices from the Cinema Department (a nonfiction novel) (SUNY, 2015), and with Patricia R. Zimmermann, The Flaherty: Decades in the Cause of Independent Cinema (Indiana, 2017). Forthcoming from Oxford: The Sublimity of Document: Cinema as Diorama (Avant-Doc 2) is forthcoming. He teaches film history at Hamilton College.

I arrived at Wells College in August of 1987—of two minds.

For 15 years I’d been passionately interested in what has been called variously, “avant-garde film,” “experimental film,” “underground film”—and had heard legendary tales of how the Flaherty Seminar chewed up avant-garde filmmakers. Jonas Mekas and Ken Jacobs had apparently attempted to crash the 1963 Flaherty to screen Jack Smith’s Flaming Creatures [1963] and Jacobs’ own Blonde Cobra [1963], an event later documented in Mekas’s film Lost Lost Lost [1976]. To Mekas and Jacobs the Flaherty seemed the tired past, not the creative present—an organization and an annual event in need of an intervention.

On the other hand, I’d agreed to be present at the seminar as one of the representatives of Peter Watkins’ epic media-critique, The Journey [1987], which had premiered at Berlin the previous winter. I was proud of the work I had done, along with hundreds of collaborators, on The Journey—and excited that Richard Herskowitz (at the time program director at Cornell Cinema) had decided to show all 14 ½ hours of the film, much of it outside normal screening hours for the Flaherty. This was to be an intervention into conventional media-time, including the media-time of Flaherty seminarians.

I registered to attend the whole week, saw a few acquaintances, made some new ones—and kept telling myself that it would be fun to discuss the visionary Watkins film with seminarians on Wednesday evening.

“Visionary”? The process of making The Journey was meant to model a new kind of political organization: an international, non-hierarchical network of people around the world committed to social justice and environmental sanity, and interested in using the grassroots production of media as a way of learning about the world and acting progressively within it. Ideally, the network created in the production of the film would continue to expand beyond the film, perhaps by using the film (remember, this is before the Internet). Watkins had circled the earth three times between 1984 and 1987 to establish grassroots production units in 12 countries, to talk with locally organized crews, and finally to shoot the film.

I told myself I was not at all nervous about the upcoming discussion.

The discussion with Watkins (and several others who had worked on The Journey) turned out to be a legendary “trashing” of a film/filmmaker (the discussion is included in The Flaherty: Decades in the Cause of Independent Cinema). The film had more than tested the patience of many seminarians and they were happy to vent their frustrations.

In the end, I was disappointed with the response to what I thought was a remarkable cinematic effort, and later on, saddened to realize that my having worked to bring Watkins to the seminar had seriously damaged my relationship with him.

I’m not sorry The Journey was presented at the Flaherty; it deserved to be shown and resonated well with the other films Herskowitz had programmed (by Su Friedrich, Yervant Gianikian and Angela Ricci Lucchi, John Greyson, Alfred Guzzetti, Johan van der Keuken, Ilan Ziv…). But looking back on that discussion, I do have regrets.

The Journey is focused on the fact that, around the world, serious global issues were almost never a topic around the family dinner table (not sure the “family dinner table” still exists!). Watkins was interested in demonstrating how conventionally organized families avoided discussing serious issues together. I remember Patty Zimmermann directing a question to me in particular: something like, “Do you think the film might be stronger if it included a unconventional family, like say a lesbian couple?” I should have said, “Well, the focus here is on the dangerous anti-educational, anti-political habits of what traditional culture considers ‘normal’ families.” Instead, I remember saying something (I no longer remember exactly what) that I felt would ingratiate me with Patty and others who felt her question was pertinent.

I believe the final comment to Watkins was by a woman who identified herself as a former clinical psychologist: “I’m not being mean when I say this, just brutally real—please understand that. I liken your film to radical surgery with a rusty knife without anesthesia.” She went on to explain that there was no way her students could be expected to sit through the film.

Watkins said, “I’m sorry. I can’t respond to your comment.” But I continue to wish I’d said, “If you honestly believe you were not “being mean” with your comment, I’m afraid you’re not clear on what being mean means!” Or perhaps, “I see why you’re a former clinical psychologist!”—though actually being a smart-ass never works out for me.

I returned to the Flaherty the following year, partly because I felt I might need to continue to defend The Journey (I was correct)—and as had been true the year before, I continued to see films of considerable interest, to meet new filmmakers, and to develop new relationships.

The irony is that, though I’ve found it fascinating to transcribe and edit many of the big-group Flaherty discussions (first, for a special issue of Wide Angle [vol. 17: nos. 1-4], bravely published by longtime Flaherty-ite and then-editor Ruth Bradley; and years later for The Flaherty; Decades in the Cause of Independent Cinema), I’ve never liked the seminar model of discussing a film immediately after seeing it and with the filmmaker present—I’m so rarely clear about what I think immediately after a film and am not particularly interested in hearing others’ off-the-cuff reactions.

I attended the Flaherty regularly for many years, but my relationship with the seminars has always felt tentative—perhaps a residue of my experience with The Journey. I guess I’ve never quite forgiven that group of seminarians for not having a sense of humor about how their own impatience with the Watkins epic (a film meant to be a conscious intervention within the regular, predictable, comfortable schedules of those who see it, including “media-savvy” audiences like those at “Flaherty summer film camp”) was, in fact, the essence of what The Journey was about.

Mark Geiger is the founder of Geiger Guitars, where he builds custom-stringed instrument. An Ithaca College Cinema and Photography alum, he was engaged for many years in set construction at Paramount Pictures before turning to custom instrument making. He can be reached at geigerguitars@earthlink.net.

I was a townie and former carpenter who was a cinema and photography student at Ithaca College in upstate New York.

In 1987 I was privileged to be one of the first undergraduate students to attend the Flaherty Seminar on an internship.

I was encouraged to apply and delighted to be accepted. I enjoyed meeting filmmakers and scholars from around the world. I enjoyed seeing films I would never have been able to see otherwise.

I have two very vivid memories of the Flaherty.

One is the screening of The Journey [1987] by Peter Watkins and the other is a discussion of The Bombing of Osage Avenue [1986] by Louis Massiah.

I’ll start with the latter.

It’s the story of the police bombing of a house controlled by MOVE that engulfed an entire block in the Cobbs Creek area of West Philadelphia.

During the discussion the comments by a British man talking about how police in the U.S. used excessive force as a matter of course struck me as much as the film did. My immediate gut response was Northern Ireland and the official British response to that conflict. My take away was that we all seemed to be myopic about our own state of affairs.

Unfortunately, I was a little too timid and unsure of myself to speak up.

I also give a lot of credit to Richard Herskowitz, as well as Peter Watkins and Scott MacDonald, for screening Watkins’ 14-hour epic, The Journey [1987].

While I did indeed consider it a marathon, I’m glad I watched the whole film.

I even turned my name badge over and drew a “?” to mimic the ending of each segment of The Journey.

At that 1987 Flaherty Seminar, I had the rather schizophrenic reaction of being simultaneously in over my head and at home.