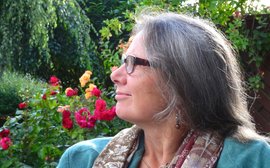 "Witnessing" and Witnessing at the Flaherty: Sam Gregory

Posted by Patricia Zimmermann at 9:02AM   |  Add a comment 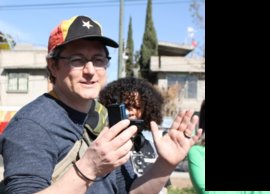 Sam Gregory builds the skills, tools, and collaborations to help everyone be a witness for human rights and to use the power of the moving image and participatory technologies for change. An award-winning human rights advocate, video producer, and technologist, he is Program Director of WITNESS (www.witness.org), the leading organization supporting anyone, anywhere to use video for human rights. He also teaches at Harvard’s Kennedy School. Sam has worked on campaigns worldwide and on prize-winning tools like ObscuraCam and CameraV. In 2012, he co-founded the Video4Change network of organizations using video for human rights and social justice.

My recollections of the Flaherty are closely tied to one courageous friend and witness and to one revolution witnessed through social media.

I first came to the Flaherty in 2003 as a guest for the “Witnessing the World” seminar, programmed by John Gianvito. My dear friend and comrade-in-arms, Joey Lozano, attended in conjunction with the screening of Peter Wintonick and Kat Cizek's Seeing Is Believing: Handicams, Human Rights, And The News [2002], a prescient feature documenting the impact of video on the world.

Seeing Is Believing surveyed the use of video for human rights. It featured the organization I work for, WITNESS, which focuses on how to enable anyone anywhere to use video technology to advance human rights, and works closely with citizens and human rights movements around the world. One of the film’s central characters is Joey Lozano, a pint-sized activist who with zest and tremendous moral and physical courage documented the resistance of indigenous rights activists on his home island of Mindanao in the Philippines.

In Seeing is Believing, Kat and Peter’s exploration of the question of who gets to tell the story of witnessed reality ranged from the members of Nakamata, an indigenous land rights movement that Joey taught to film for themselves, to anti-extremist activists in Europe, and people fighting human trafficking.

Because I attended only that one session of the 2003 seminar, my memories are tied up with the emotion of seeing my dear friend Joey and celebrating him on the big screen. The subsequent loss of both Joey and Peter to early deaths from illness tinges that memory, particularly poignant for me since I believe this screening was the only time we were ever all together in the same place.

My next opportunity to come to the Seminar was in June 20-26, 2009, for “Witnesses, Monuments, Ruins,” programmed by Irina Leimbacher (hmm, I spot a magnet-like attraction to “witness” in Flaherty Seminar titles). It was during this seminar that I witnessed a revolution on social media.

Some of my memories of the 2009 seminar are the classic Flaherty kind: kindred spirits meeting across a lunch table or after a discussion, amazing audiovisual experiences watched without regard for the time and in blissful ignorance of what would come next. I recall some manic dancing late at night to Michael Jackson music following the news of his death on June 25th during the seminar.

As someone who lives and works in the constant crisis mode of global activism and often watches videos as evidentiary material, sometimes on double-speed, the experience of the seminar’s screenings and gatherings embodied a refreshing change of pace.

The films that most powerfully spoke to me were the works of Omar Amiralay, as well as Lisa Barbash and Lucien Castaing-Taylor’s Sweetgrass [2009] and Amar Kanwar's multi-channel video installation, The Lightning Testimonies [2007]. I had recently returned from Syria, which at that time was caught in the artificial passivity of an ossified authoritarian state whose pre-history Omar caught in his courageous, subtle films. Omar's Film-Essay on the Euphrates Dam [1970] and The Chickens [1977] spoke simply, directly, and powerfully to human rights issues.

Sweetgrass offered an amazing sensory experience quite different from my usual filmmaking tastes. Together with Sensory Ethnography Lab films I was to see later, this film set my mind thinking about what immersive experience could mean in a film and how one can really feel an alternate reality.

Shortly after the seminar, I began exploring how storytelling arcs of immersive livestreaming and virtual reality experiences that capture both the mundane moments and the crisis moments in frontline activism can help engage viewers to move from being passive spectators to immersed, engaged witnesses. This process has now evolved into a livestreaming-and-action project at WITNESS, called Mobil-Eyes Us.

However, frustration also infuses my memories of the 2009 seminar.

I was powerfully aware that a new form of witnessing was being enacted in Iran at the very moment we were enjoying the seminar. The events known as the Green Movement were entering their second week of massive global attention.

This political struggle mobilized images on social media to engage Iranian and global publics. On the first day of the seminar, Neda Agha-Soltan, a student protesting the Iranian election, was murdered on the streets of Tehran. Her death, captured horribly yet cinematically on camera, was then shared on YouTube for so many to see.

Nevertheless, the structure of the seminar, which insisted on privileging the program that had been curated, seemed to exclude this on-the-ground, amateur-produced witnessing. I remember a powerful sense that we seminarians were staying inside our box talking about witnessing while the world outside the seminar was changing and being witnessed in real time.

Of course, after eight years of continued work with movements and activists using digital media to witness so many variants of opportunity, failure, frustration, and success, the revelatory sense of that particular moment has dulled for me.

But I still remember that those of us engaged in human rights media practices occupied a moment of discovery in 2009. Yet, paradoxically, in the midst of a Flaherty seminar exploring the act of witnessing, we chose not to witness in real-time.

I'm waiting for my next Flaherty. Surely, now is the time for a curator to include witnessing not only within another seminar title, but also to reflect during the seminar the diverse ways witnessing occurs in social and real-time media.