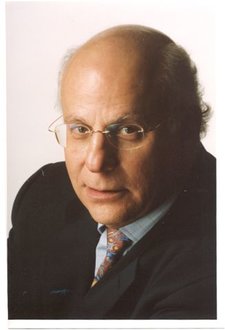 Howard Weinberg is a documentary director and producer. His documentaries have won Emmy, DuPont and other awards, have been translated into foreign languages for festivals, and are preserved in the moving image collection of the Library of Congress.  His television magazine work has been shown on CBS Sunday Morning and 60 Minutes. More about Weinberg can be found at his website : http://www.howardweinberg.net; contributions toward the completion of Nam June Paik & TV Lab: License To Create can be made there.

When I was at Columbia Journalism School, Willard Van Dyke, then curator of film at the Museum of Modern Art (MoMA), told me to stay connected to the independent film community by joining the New York Film/Video Council (NYFVC)—I was headed toward a career in television.  Why didn’t he suggest that I attend the Flaherty Film Seminars?  I don't know, but he was involved with both.

So were others I came to know, like Bill Sloan (Bill’s Bar is still a Flaherty mainstay) and George Stoney, whose All My Babies [1953] had been shown at the first Flaherty Seminar.

I’d seen All My Babies in a documentary course that George taught at Columbia University before he went to Canada, then came back to become a legendary professor at NYU. Both Bill and George were past presidents of the New York Film/Video Council of which I was a board member for seventeen years and president for eight.

The NYFVC was a non-profit that had been serving the independent media community since 1946. It programmed all forms of visual media. I never thought of TV and film as separate pursuits but many did. Other distinctions abounded: narrative vs. documentary; film vs. video; and one that always disturbed me, journalism vs. documentary. Often at Flaherty I heard filmmakers say, “I’m not a journalist.”

The first informal continuing professional education I experienced before Flaherty was at INPUT: the International Public Television Producers Conference in 1992 in Baltimore when I was Executive Producer of Listening to America with Bill Moyers [1992: 26-part TV series] on PBS.  I would go on to other INPUTS in Fort Worth, Halifax, Rotterdam, Aarhus, Barcelona, San Francisco, and Lugano.

For me the Flaherty Seminar has been a condensed form of graduate school with a diverse group of students who share similar interests. Lifelong friendships are formed.

In 2003, the year I went to INPUT in Aarhus, Denmark, I attended my first Flaherty Seminar, at Vassar College. It was curated brilliantly by John Gianvito. Lucy Kostelanetz, a neighbor and member of the NYFVC and the Flaherty Board, had recommended that I go because the topic was “Witnessing the World.”

Two films by Canadian filmmakers fascinated me: Zyklon Portrait [1999] by Elida Schogt and Seeing Is Believing: Handicams, Human Rights, and the News [2002] by Peter Wintonick and Katerina Cizek.

Avi Mograbi’s Israeli films were incisive and humorous, especially Happy Birthday, Mr. Mograbi [1998]. The entire audience at Vassar seemed appalled by Holly Fisher's Kalama Sutta [2002] because she’d made an experimental, artistic film in Burma — a place and subject that cried out for documentary reporting.  I’d never before seen an audience erupt in such disapproval.

Franny also showed an impressive film she’d made in India, Drowned Out [2002]. I recommended it to Thirteen/WNET’s new international series Wide Angle, which commissioned her to make a shorter, more journalistic version for broadcast. Marlo Poras’s Mai’s America [2002] stayed with me and I screened it for documentary students years later at Columbia.

At my first Flaherty, Marcia Rock, who runs the NYU journalism documentary program, asked me if I’d like to teach Documentary History and Strategy.  For the next three Spring semesters, I taught at NYU and then, after raising enough money to complete production on my work-in-progress, Nam June Paik & TV Lab: License To Create, I co-taught and mentored students at Columbia Journalism School.  A student filmmaker I met at Flaherty, Alana Kakoyiannis, shot second camera when I interviewed Paik’s widow Shigeko Kubota, a video artist in her own right.

In 2007 I saw two versions of Natalia Almada’s Al Otro Lado (To the Other Side), one at INPUT in Lugano, the other at the  53rd Flaherty Seminar, “South of the Other,” programmed by Mahen Bonetti and Carlos Gutierrez, at Vassar. Almada’s film focuses on drug trafficking and illegal migration between Mexico and the United States and highlights narco corrido music.  I subsequently went to MoMA to see her next film El General [ 2009]

Dan Streible, of Orphan Film Symposium fame, superbly curated the last Flaherty seminar I attended in 2011, "Sonic Truth.". George Stoney showed A Reunion of All My Babies [2010] and we saw the 1906 film A Trip Down Market Street Before the Fire.  Most powerful for me was Tan Pin Pin’s Singapore Gaga [2010]. I’ve followed her films since.

Caroline Martel’s Wavemakers [2012] was an intriguing work-in-progress and I later went to the Museum of the Moving Image to see a completed version.

Sam Pollard showed some of his work with Spike Lee, and I was introduced to the animated films of Jodie Mack, whom I later ran into on Main Street in Hanover, NH during a fall mini-reunion at Dartmouth.

I met Lillian Schwartz and learned that she had worked at the TV LAB at Thirteen/WNET, the subject of my nearly finished documentary. Dan showed her earlier experimental work at Bell Labs.

For me the highlight of “Sonic Truth” was my friend Jane Weiner, who came from Paris to show her documentary On Being There with Richard Leacock [2010]. I later drove her to interview Robert Drew in Sharon, CT.

When organized well, there’s no better introduction to remarkable films and significant filmmakers than the Flaherty Seminar.