My Own Private Rayuela: Josetxo Cerdan 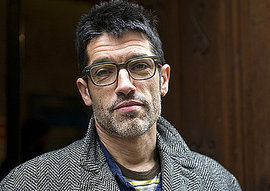 Josetxo Cerdán Los Arcos is professor at the Universidad Carlos III de Madrid (Spain). He has written on documentary, transnational film, the Atlantic Hispanic, and mobility. He has published articles in Screen, Studies in Spanish & Latin American Cinemas or Transnational Cinemas. Recently, he has collaborated on collective books such as Transnational Cinema at the Borders. Borderscapes and cinematic imaginary (edited by A. Mendes and J. Sundholm, 2018) and  The Routledge Companion to Latin American Cinema (M. D’Lugo, A. Lopez, L. Podalsky, 2017). He was artistic director at Punto de Vista (2010-2013) and programmer of the Flaherty Seminar in 2012.

Yes! I programmed the Flaherty Seminar, in 2012. We were young and wild. Well, more wild than young.

[From here on, you can read the whole text in a linear way, paragraph after paragraph, or choose your own way. I’ll try to help you with some indications. If you’re just interested in my Open Wounds seminar, you can read #3, #5, #10 & #12, and skip the rest]

Since then, I’ve been wanting to return. I didn’t try to come back in 2013—I needed a rest after 3 seminars in a row, and being in the center of the storm during the last one. Anyway for one reason or another, I haven’t been back. And yes, I miss you, Flaherty Seminar.

[More about the earlier seminars I attended in #4, #5]

I think 2012 was a good year for the seminar. At least, people looked happy at the end and most of the anonymous surveys confirmed this. Don’t worry, I won’t bore you with the nice comments I received; I read them to myself when I’m feeling down.

[If you think this is too corny you can find some wilder anecdotes in #5, but if you’re really enjoying it, you might want to jump to #10]

I participated in my first seminar in 2010. I’d arrived in New York that year on a grant from NYU’s Department of Spanish and Portuguese Literature. The year before, I had agreed to be artistic director of the Punto de Vista film festival. Former executive director of the Flaherty, Margarita de la Vega Hurtado, was my contact in America for Punto de Vista, so, being in New York and given my new programming position, there was no excuse: I had to go.

[If you would like to program the Flaherty, you’ll find more about how I was selected to program in #6 & #7]

The 2010 seminar, WORK, was programmed by Denis Lim. I remember meeting Dennis the day before the seminar. He looked extremely nervous. I have great memories of that year. Carlos Gutiérrez has also shared this in his “Flaherty Story”: 2010 was the year of World Cup in South Africa (yes, the one won by Spain!). Most of the Latinos at the Flaherty, including Lisandro Alonso, Pedro González Rubio and Eugenio Polgovsky, were soccer fans, so when there was a match (and there were matches all the time) we skipped screenings. I remember Lisandro saying to us in low voice, “Hey guys, the next film is one of mine; let’s watch the game!” The problem was that Lisandro’s films are short and we couldn’t see the whole match before the discussion.

In 2012 there was no World Cup, but someone knew about a lake near Colgate University where people could swim. At the end of the seminar there were two kinds of participants: those who had gone to the lake and those who hadn’t.

[Is this too frivolous? Maybe you can find something more transcendental in #7 or #11.]

If Margarita de la Vega Hurtado was the one to bring me to my first seminar, Lucila Moctezuma, then a Flaherty Trustee, first made me think about the possibility of programming a Flaherty. I have a clear memory of her innocent smile when she asked me, during the 2010 seminar, “Would you like to program a seminar?” During my holidays I drew up a proposal, and at the end of 2011, when my Flaherty experience was a distant midsummer night’s dream, I received a call from Mary Kerr.

[You’ll learn about the curatorial process in #7 and #9.]

I learned a lot working on my Flaherty for almost a year and a half. I remember a crisis with Mary Kerr. It happened eight or ten weeks before the seminar. I sent Mary a first draft of the program, and then, after a long, sleepless night, changed everything. She was really mad, and Lucila needed to mediate. Finally Mary accepted my changes, and I agreed not to work during sleepless nights. My seminar was the last one for Mary as executive producer—no connection I hope! By the end of the seminar Mary and I were like two old pals after a dangerous mission. The title for my seminar (“Open Wounds”) was Mary’s idea. I wanted it to be “Bleeding Wounds.” Dennis suggested “There Will Be Blood.” I liked them all.

[Now I need to summarize; if you feel you didn’t read anything remarkable in the previous paragraphs, maybe you’d better stop reading, because you won’t in the next five either!]

Steve Holmgren was, at least for me, another key person during those years: he ran the bar my year and was the one who introduced me to the Flaherty Skull Ceremony. If you haven’t heard about this, either you know little about the Flaherty, or you’re not interested in nightlife!

[A lot of partying goes on during the Flaherty. There are some other words about sleepless nights in #12]

I do have bittersweet memories too. Debating my ideas with the Advisory Board on the phone was sometimes painful. I thought I was the programmer, but everybody had something to critique or something to propose.

On the good side, I remember the conversation with Kathy Geritz about Sun Xun, and how she opened my mind—and Sun became part of the program. I have a special memory of a couple of conversations about seminar dynamics with John Gianvito at the Yamagata Documentary Film Festival. And Maria Campaña, a Flaherty Fellow my year, helped me after the seminar: she made possible our having Eduardo Coutinho at Punto de Vista in 2013. I also remember Mar Cabra, a young Spanish woman who didn’t enjoy the experimental part of my program. Now she’s a well-known investigative journalist in Spain.

[In #11 I try to develop some controversial thoughts on the seminar dynamics.]

I loved having Lourdes Portillo and Su Friedrich heading my filmmaker team. Now, almost six years later, I think even the collisions between filmmakers during the discussions allowed us to go further into how we think about film, history, and humanity.

There is always something repetitive about the Flaherty. Not because of the regular structure of the event, but because of the dynamics of the discussions. It doesn’t matter what the topic of the seminar is; at a certain point, particular issues will arise again and again. I was astonished during the WORK seminar that there was no discussion about class struggle at all. At some point the discussion went back to gender issues right away.

And in between discussions, there is always an underground battle going between two groups: the academics on one hand (too pretentious and theoretical for the others) and the filmmakers and people from the industry (often identified as the old timers). Of course, neither group believes in the principle of “non-preconception,” and part of the programmer’s work is to deal with the preconceptions of both groups. I faced it in a confrontational way, by playing a song before every screening to create a particular mood.

[Last paragraph: I hope your journey through my text has been worthy of your time.]

The morning after my seminar, I remember a small group of sleepless people crossing the campus, heading down into the town of Hamilton to have breakfast. I was walking with a Flaherty newcomer, David Pendleton, the programmer at the Harvard Film Archive. He was completely enthusiastic about the seminar. Later, he had his own (PLAY, 2016). David was one of the three now-dead friends I’ve mentioned in my text, along with Eugenio and Eduardo. If documentary is about something, it’s human beings, and the passing of these loved ones has left us all with bleeding wounds.

I Drank the Kool-Aid: Carlos A. Gutiérrez

Posted by Patricia Zimmermann at 9:47AM   |  Add a comment

Carlos A. Gutiérrez is Co-founder and Executive Director of Cinema Tropical, the New York-based nonprofit organization that has become the leading presenter of Latin American cinema in the US. As a guest curator, he has presented several film/video series at different cultural institutions, including MoMA, the Guggenheim Museum, BAMcinématek, and the Film Society of Lincoln Center. He is a contributing editor to BOMB magazine. He has served as a member of the jury and panelist for various international film festivals and funds including Morelia, Seattle, SANFIC, DocsMX, the Sundance Documentary Fund, and the Tribeca Film Institute's Latin American Media Arts Fund.

Based on my very first experience attending the Flaherty Film Seminar in the summer of 2003, I never would have thought I’d become part of the Flaherty family.

My first experience at the seminar, which probably was not that different from many other people’s, was overall frustrating and discouraging, even though I saw some amazing work and met some great people including filmmakers Eryk Rocha, Ernesto Ardito and Virna Molina.

For me, having recently graduated from a MA in Cinema Studies program, it seemed redundant to return to an environment where academic discourse and personal interpretations predominated over the interests of the cinephile.

However, the then Executive Director Margarita de la Vega Hurtado insisted that I return and so I did in 2004, for the seminar marking the Flaherty’s 50th anniversary, and again a couple of years later. I was not conscious at the time that I was slowly sipping the Flaherty Kool-Aid.

To my surprise, I was then selected to program the 2007 seminar, along with my friend and colleague Mahen Bonetti. We had previously partnered to produce an outdoor screening of Marcel Camus’ Black Orpheus at Brooklyn’s Fort Greene Park back in 2002, drawing a wonderful crowd.

One of the biggest assets of the Flaherty Seminar is its placement of curatorial practices at the forefront of the organization. With over sixty years of history, the Flaherty is one of the limited number of film organizations that do this. Sure, film festival programmers abound, but for the most part they fail at creating conversations and larger discussions with their film selections.

I’m surely not the first one, and won’t be the last one, to say it, but curating the Flaherty Seminar is a programmer’s dream come true. Having a captive audience for one week, not having to announce the program in advance, and having complete freedom to mix formats, genres, nationalities, narratives and aesthetics is an idyllic experience.

For many of us who have had the privilege to program the seminar, the experience has served as a sort of postgraduate degree that has made us reflect and improve our curatorial practices.

I have to confess that some of my favorite moments at the seminar have been non-cinematic. The recent and unexpected passing of director Eugenio Polgovsky brought to mind the times we mischievously sneaked out of screenings to catch some of the World Cup Games.

Watching the Argentina, Mexico, and Spain games at the 2010 seminar with Eugenio, Lisandro Alonso, Josexto Cerdán, Pedro González Rubio, Sofía Gallisá and others, or watching the Brazil-Mexico game at the bar of the Colgate Inn with Cao Guimarães, Chris Gude, Daniella Alatorre, and Jorge Caballero, and others, created a very special camaraderie that I deeply treasure.