Posted by Patricia Zimmermann at 9:49AM   |  Add a comment 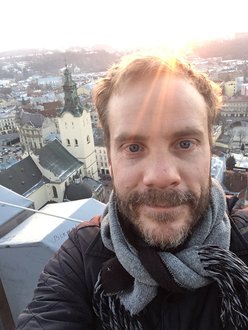 David Gracon, a native of Buffalo, NY, has been engaged in post-punk, experimental music, zines, college radio, and activist experimental film, video and documentary communities since the mid 1990’s. He is an associate professor of media studies at Eastern Illinois University. His work has screened at the Chicago Underground Film Festival, Mexican Centre for Music and Sonic Art, and elsewhere.  He programs for Hallways Microcinema and the Basilica Soundscape. David is currently a US Fulbright Scholar teaching media studies in Ukraine.

The Flaherty Seminar is a homecoming.

But home isn’t always the most pleasant of places.

At the Flaherty, I leave behind my life as a professor, media-maker, and programmer in the Midwest, a place I’ve never really considered home.

I make the long drive to Colgate. Along the way, I visit family and friends in the Buffalo area. The vast rolling hills of central New York amaze me. Photos never do them justice. Zigzagging on rollercoaster roads, I manage to remember how to find Hamilton, New York, where the Flaherty Seminar happens. I have gone four times.

When I went to college, my family couldn’t afford the dorm experience.  So going to the Flaherty offers a chance to live the youth I never had. While many participants don’t like the dorms, I think it’s fun living there for a week. I often joke I should hang a Creed poster on the walls.

The rigid schedule of screenings, discussions, and meals comforts me. Perhaps it is similar to how military people appreciate routine or how prisoners eventually relish their own institutionalization. Structure provides a weird comfort: it takes care of everything.

At the Flaherty, I have conversations with the custodians and cafeteria staff, the working folks running things behind the scenes. These are sometimes my best, most unpretentious Flaherty conversations. To watch all these documentary films about ordinary people and not actually engage such people in real life would feel strange.

The seminar challenges participants to exist without preconception, a task difficult to accomplish, especially for smart academics with big egos. But can these faculty types win at foursquare, a schoolyard game often played at the seminar?

After the last screening and discussion of the day, I like to walk quietly through the small thicket of trees to return to my dorm room. No media. Insects buzzing. Stars.

Once, late at night, a van packed with seminarians went skinny-dipping. Like a lost scene from Dead Poets Society, naked people from Mexico, Spain, and maybe Portugal swam in a secluded lake owned by a fancy school. As the sun rose, we returned on winding back roads flanked by foggy landscapes, feeling exhilarated.

Rubbing shoulders with others from Buffalo is another Flaherty highlight. These DIY media-makers, folks from Squeaky Wheel, and descendants of the radical Media Study Department at SUNY-Buffalo remind me where I am from.

A rust-belt city, Buffalo’s unofficial nickname is The City of No Illusions, which for me translates as a city with a vastly under-recognized experimental and media-activist legacy. Without fail at the Flaherty, I meet New Yorkers who wear fancy glasses that cost more than my monthly rent and they talk shit about Buffalo. Their disdain drives me mad.

One year, Tony Conrad, my former mentor at SUNY-Buffalo, crashed the seminar. It was a pleasure to catch up. Some whispered, “I think that’s Tony Conrad over there.” To me, he was just Tony.

I remember his radiating smile. At a local dive bar in Hamilton, Tony playfully hopped up and down on the dance floor like an ostrich, a nod perhaps to Tony’s former band, The Primitives, and their famous song and dance, “The Ostrich.” Tony’s dancing was joyfully out of place and challenging, just like his experimental films and videos.

We chatted about the trials of my life as a professor in Illinois. We joked that the Department of Media Study is such a radical program that afterwards it’s hard to fit in anywhere else. I sought career advice. Tony replied cryptically, “These things take time.  They can take a long time.” Tony passed away the following year. This was our last conversation.

The documentary filmmaker Robert Flaherty made a career constructing dehumanizing films about other people and cultures. Now a seminar exists in his name. Yet, that seminar is very critical, even of him, a strange contradiction.

Beyond Robert Flaherty’s problematic representations of others, many criticize the seminar for high cost and limited accessibility. When I enthusiastically tell others about the seminar, a common response is, “I’d love to but it’s too expensive.” What about all the people who might never have a chance to attend the Flaherty?

Combined with the Buffalo scene and DIY punk culture, my Flaherty experiences galvanized me to create a microcinema in the irregular hallway in my Champaign, Illinois, apartment. I called it Hallways Microcinema, a nod to Buffalo’s Hallwalls. It had a two-year run with twenty-one events, all free.

I programmed screenings drawn directly from the Flaherty, including projects by Su Friedrich, Lourdes Portillo, Johan Grimonprez, and Jesse McLean. I met up with Vanessa Renwick from the Oregon Department of Kickass at a Flaherty. While touring, she presented her films for us. Without Hallways, these works wouldn’t have seen the light of day in Champaign.

Hallways served as a microcosm of the Flaherty Seminar. We screened challenging works and opened up lively discussion. People drank, hung out, talked, and formed a community.  Like any community, it could be seen as exclusionary.

At the Flaherty, you work through half-baked ideas and get advice over meals. You never know where a conversation might lead you.

In 2016, I was thinking about applying for a Fulbright Fellowship. Somehow, I got connected with screen studies scholar Patty Zimmermann. She had recently spent time in Ukraine, delivering lectures. She encouraged me to apply to Ukraine, an emerging democracy with students voraciously consuming new ideas. Her enthusiasm sold me.

I write this Flaherty Story looking at winter outside my window in Ivano-Frankivsk, Ukraine, my home for a year. I contemplate my next course of action. I think about how the Flaherty Seminar supported and nurtured me. I consider how fortunate I was to be able to attend.

The problem with experiencing a mind-blowing Flaherty Seminar is that the next one will most likely disappoint you. Even though this has happened to me twice, my return to Buffalo, central New York, and the Flaherty always conjures a homecoming, reminding me where I am from and where I might go.