Posted by Patricia Zimmermann at 5:46PM   |  Add a comment 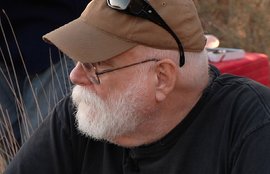 Jay Ruby, an emeritus professor from Temple University, has been exploring the relationship between cultures and pictures for the past forty years and is considered one of the founders of visual anthropology. His research interests revolve around the application of anthropological insights to the production and comprehension of photographs, film, and television and ethnographies of American cultures. He has conducted fieldwork in Southern California, The Sudan, Utah, Juniata County, PA, Oak Park, IL and Malibu, CA. The results have been published in ten books, over one hundred articles and several films.

In 1991, Faye Ginsburg proposed a Flaherty Film Seminar that was devoted to films produced by indigenous filmmakers.

She submitted the proposal to the International Film Seminar (IFS) board, the organization that at that time ran the annual Robert Flaherty Film Seminar, and it was approved. Both Faye and I were serving as board members at that time.

Shortly after obtaining approval, Faye asked me to co-program the seminar. I agreed. We met with Tom Johnson, IFS president at the time. He approved the idea.

Shortly after that, IFS sent out a press release announcing the seminar and an open call for films. And Fay and I began a list of potential films we already knew. As far as I was aware, Faye was the most knowledgeable person on indigenous filmmaking in the country.

Soon thereafter, two board members circulated a memo via fax to other board members.  I never received a copy.

The board discussed the problem.  If a meeting was called, I never received an invitation.

While I was never directly told, it appears that the board supported Bowser and Massiah’s objections. In addition, the question of cost was raised. Someone suggested that the cost of transporting the indigenous filmmakers, some from a great distance, was beyond the budget the organization had allotted for the seminar.

It is unclear why the issue raised by Bowser and Massiah, along with the question of excessive costs, was not discussed when Faye’s proposal was under consideration.

I learned of these matters indirectly when Faye called me. She had come to feel that the situation was hopeless and that her only option was to resign as programmer. I agreed and did the same.

No other board member or the president or the executive secretary showed me the courtesy of calling to discuss the situation. As the old cliché goes, “I knew when I was not wanted” and resigned as a trustee. I never again attended a Flaherty seminar.

It is crucial to remember that the Bowser/Massiah memo provided no names of qualified programmers from indigenous communities, nor, so far as I know, did any board member or the president or the executive secretary offer any suggestions.

No one asked Faye or myself or anyone else for a list of names. The reason for this is simple: at the time there were, so far as I knew, no qualified indigenous programmers. The board’s demand simply displayed a lack of knowledge of this field. While their stance appeared to be ideologically correct, it resulted in a demand impossible to meet.

The Bowser/Massiah memo made impossible what might have been a positive outcome: the mounting of an indigenous seminar where the growing number of Native-American filmmakers like Larry Littlebird might have had a chance to meet people who could have helped to find a wider public, as well as an opportunity to get to know other indigenous filmmakers. To my knowledge, in the subsequent decades, the Flaherty has never been able to produce such a seminar.

During this time in the late 1980s and early 1990s anthropologists were wrestling with what was called “the crisis of representation.” Both Faye and I had published articles that dealt with the profound problem of who has the right to represent another.

I am fairly certain none of the people involved with IFS were aware of how thoroughly these issues were being discussed in anthropology and in other scholarly fields.

Had we been allowed to program the seminar, there could have been useful discussions about how to deal with the thorny question of who gets to program whom, and whether the only way to correct the wrongs of the past was to restrict the programming of events like the Flaherty Seminar to programmers from the same community as the filmmakers whose films are being shown.

It is difficult for me to understand why Massiah and Bowser waited to voice their concerns until an announcement of the seminar was publicly circulated. This embarrassed the Flaherty organization and damaged its reputation.

Had they expressed their reservations at the meeting where Ginsburg’s proposal was discussed, a decision could have been made in private, thus avoiding the negative public impact of the memo.

The indigenous seminar could have been postponed or the board could have acknowledged the lack of experienced programmers among the underrepresented. They could have tried to develop some sort of apprentice program where people from these communities could acquire the experience needed to be film programmers.

This was an unfortunate episode in the history of the seminar.  It could easily have been avoided.  I have never understood why it was not.

Get Our Your Shovel: Patricia R. Zimmermann

Posted by Patricia Zimmermann at 8:47PM   |  Add a comment

Patricia R. Zimmermann is Professor of Screen Studies and codirector of the Finger Lakes Environmental Film Festival at Ithaca College, Ithaca, New York. She is the author and editor of numerous books, including Thinking Through Digital Media: Transnational Environments and Locative Places (2015, with Dale Hudson), Open-Spaces: Openings, Closings, and Thresholds of International Public Media (2016), The Flaherty: Decades in the Cause of Independent Film (2017, with Scott MacDonald), and Open-Space New Media Documentary: A Toolkit for Theory and Practice (2018, with Helen De Michiel).

“I bet you thought I was dead!”

At my first breakfast at the 1980 Flaherty Seminar at Wells College in central New York, I picked at overcooked scrambled eggs and burnt wheat toast. I had sat down at the only open seat at a table with two gray-haired gentlemen.

Sheepishly, I introduced myself. One man offered he was George Stoney, who I knew as the community media and Challenge for Change legend.

The other, the one who thought I figured he was dead, identified himself as Erik Barnouw.

I blurted out that I had just read his books on documentary and the history of broadcasting to prepare for my PhD qualifying exams at the University of Wisconsin-Madison. That’s when he chortled the statement above. He was 72.

I had received what was then called a “grant-in-aid” to attend the seminar programmed by documentary scholar John Stuart Katz, a film professor at York University in Toronto. This Flaherty was the first film event I’d ever attended on the East Coast. Madison friends insisted I was insane to go just two weeks before my exams.

When I signed in, Barbara Van Dyke, the Flaherty Seminar’s executive director, greeted me with a hug. I wondered if she was related to Willard Van Dyke, the legendary filmmaker from the radical film group NYKINO and eventual head of film at the Museum of Modern Art.

At the opening reception, I’d gravitated to a huddle of twenty-somethings like me. I connected with Ruth Bradley, a PhD student at the University of Michigan who later became editor of Wide Angle, director of the Athens Film and Video Festival, and a longtime friend and collaborator.

At that first breakfast, I froze. I was sitting at a table at 7:30 a.m. with two men who had, in my neophyte assessment, changed documentary history.

When they kindly probed about my in-progress dissertation on the history of amateur film, I blurted out that I felt overwhelmed by mountains of unknown material. Erik smiled. He said, “Never be intimidated. Just get out your shovel and keep digging.”

In graduate school, I’d read and battled about documentary, then a marginalized area in film studies. The abstractions of Bateson, critical historiography, Fanon, Foucault, Habermas, Marxism, and psychoanalysis, drowned my soul—and my clarity.

Experimental documentaries like D.O.A. [1980] and Poto and Cabengo [1980] jolted me. For the first time, I experienced how documentary, programmed with experimental films by Warren Bass, Dana Hodgson, Emily Hubley, Caroline Leaf, could propel new conceptual thinking.

The French Canadian documentary/narrative film Mourir a Tue-Tete [1979] scraped away my feminist documentary theories. The film chronicled a rape with daring self-reflexivity. Anne Claire Poirier, the militant feminist director from the National Film Board of Canada, was present. In the campus pub, I crammed into a booth with her and three other young women, enthralled.

I could not figure out if the seminar was conservative, liberal, or radical. I had never attended any media event so focused on long discussions, intense debates, and entanglements between animation, archival, ethnographic, experimental, expository, hybrid, narrative, observational, personal work.

The participants featured filmmakers from every genre, as well as anthropologists, art world types, broadcasters, cinematographers, commercial media workers, distributors, elderly cineastes, exhibitors, film scholars, graduate students, journalists, librarians, marketers, and producers. Their combustions torched something inside me about the urgency of independent media that I’d not felt as a PhD student.

I was utterly intimidated. The seminar experience catapulted me into verbal paralysis.

Discussions cascaded like ferocious waterfalls of debates, ideas, histories, positions, and anger. I listened from the back of the room, jumbled up with anger, awe, critique, disdain, engagement, fascination, and frustration. I uttered one incoherent, overly theoretical, tortured statement. I filled a spiral notebook with notes.

Walking to a screening, I bumped into visual anthropologist Jay Ruby. His sharp mind terrified me. He knew exactly what he thought about every film.  Back then I criticized Nanook of the North [1922] as racist and colonialist, a position I later gutted after reading Jay’s reassessment of the film as an early collaborative ethnographic film.

At lunch, I met Bill Sloan, the librarian for the Museum of Modern Art, who spoke generously about the short experimental works.

I met film librarian D. Marie Grieco. Before a screening, she whispered two revelations to me. First, Frances Flaherty, not Robert, inaugurated the seminars, but film history had erased her. Second, Barbara was Willard’s ex-wife, and she, too, had been expunged from film history.

I realized that Frances Flaherty had built a place where young people like me could talk to legends like Erik—and Anne Claire, D. Marie, George, and Jay…

At the end of that seminar, Erik Barnouw offered the closing benediction. He performed this at every seminar he attended.

Erik recounted a story about a seminar acolyte who asked French filmmaker Chris Marker how he created such complex editing. Marker replied, “I get lost.”

Smiling, Erik commanded all of us: “Now get lost.”