Frances in Her Inglenook: Sheafe Satterthwaite

Posted by Patricia Zimmermann at 2:40PM   |  Add a comment 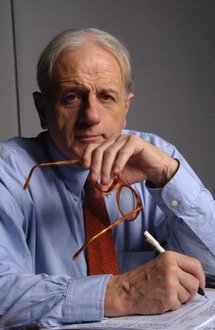 A landscape historian, Sheafe Satterthwaite taught for forty-four years at Williams College some nineteen courses explicating a plethora of North American land uses, from rangelands to urban streets, as evolving visual and human constructs.  Born in Tenafly, New Jersey, and educated at the Choate and Putney Schools and at the University of Virginia, he has long-standing, delimited, and once professorial relations to film, in its experimental and non-fiction guises. Worked as a gofer at the 1957 seminar, and attended nearly every seminar from 1984 until 2016.

Why, when I think of the early (1957?) Flaherty seminar where I worked as a eighteen-year-old gofer, do I indelibly envision Frances Flaherty sitting high above the main floor of the barn, beside Sam Ogden’s chimney, looking down on the proceedings—while also being separate from them.

Curious, too, is how she tended, I believe, to be present at most screenings of her husband’s work whenever she had occasion to be present, as was true at her home, which was what the Dummerston setting for the seminar was—otherwise known as Black Mountain Farm, very much a hillside location, possibly deserted when the menfolk went off to war in the 1940s.

(I don’t know this factually in Frances’s instance, but I do know that by 1957, there had been well over a century of hillside farm abandonment in Vermont and other New England uplands.)

I do know, both at the University of Virginia, where I founded a film society (Moving Images) around 1958, where she appeared (and just how was that trip from Vermont financed?) and at Williams College (where I once hosted her) that she would sit through whatever Flaherty film was being screened, even though she must have seen these works hundreds of times.

Could it be that tending to Bob’s work, caring for his work, was an act of devotion, even a religious observance, say like Holy Communion, to be celebrated or practiced again and again?

So I don’t have a sense of Frances’s being down on the main floor of her barn, which housed both the screening/discussion room and (was it?) two larger bedrooms on the south side, the left side as the building was entered from the east. There must have been a bathroom, but I don’t recall it.

Confusing now to me, some sixty years later: was there a projection booth?  There must have been, but do I now also recall David Flaherty, Bob’s brother, threading 16mm projectors out in the open room?

Also, when Satyajit Ray’s Pather Panchali [1955] was screened that summer (and he himself was present as that seminar’s featured “guest”), surely no 16mm print existed, and just how was 35mm handled, presumably with two projectors?

Of significance in the main “screening” room was a grand piano. Included within the large coterie of summering artists and scholars amongst whom the Flahertys had settled in southern Vermont, was Rudolf Serkin, who usually played at the early seminars. But I don’t recall his doing so when I was there. Of course, my gofer role did cause me to be away from the property on errands to neighboring Bratttleboro and elsewhere—wielding Frances’ coupe car, with a rumble seat (why the Flahertys, or why she, with such a car?).

But back to the aerie: Frances up there alone in her high-elevation inglenook. It was a balcony seat of a sort. I never recall anyone else being up there with her, and I don’t know if I myself ever went up.

And I should say, it was always difficult, however often in her later years I saw Frances, mostly in Dummerston, to know what she was thinking. There was, about her (at least for me), an air of superiority, and maybe that air has wafted through subsequent seminars over the years: here is film that, on the whole, is not blockbuster, that is the work of individuals more than companies, that may be somewhat outside the mainstream of box office successes, that is somehow special and to be savored by only the cognoscenti or self-appointed.

I also see Frances up there, “hawk-like.” Always my sense was that some people discussing Bob’s work did not know the truth as she and Bob himself knew it, and she would silently correct them.

Excellent examples of this “correcting” mode are documented in the remarkable Louisiana Story Study Film [1960], made years back at the University of Minnesota (and, stupidly, never shown at any of the many seminars I attended—since it is so very helpful to understanding the Flaherty approach). How often in that film does she correct Bob’s cameraman, Ricky Leacock, by saying “You know…” As if the cameraman did not know!