Posted by Patricia Zimmermann at 6:06PM   |  Add a comment 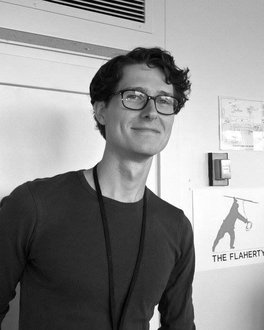 Joel Neville Anderson is a PhD Candidate in Visual and Cultural Studies at the University of Rochester producing research, curatorial, and creative works at the intersections of experimental film and video, personal documentary, and community media. His writing has recently been featured in Millennium Film Journal, International Feminist Journal of Politics, InVisible Culture: An Electronic Journal for Visual Culture, Film on the Faultline, Hyperallergic, Screen Slate, and the Directory of World Cinema, and he curates JAPAN CUTS: Festival of New Japanese Film at Japan Society in New York, and Rochester’s avant-garde film series On Film. Joel is based in New York City. Photo by Melissa Haizlip at the 2016 Flaherty Seminar.

The more I read about the Flaherty Seminar, the more I was reminded of the description I’d heard applied to my BFA conservatory: hippie bootcamp. I applied for a graduate-student fellowship, cobbled together the remaining half of the subsidized registration fee and bus fare from my university, and found myself in June, 2013, at Colgate for the 59th Flaherty.

I soon learned that following the seminar organizers’ egalitarian intentions, everyone was provided with the same dormitory rooms and cafeteria meals, along with an experiment in cinephilic endurance and sleep deprivation that forced a confrontation with the art and ethics of film curation.

Upon reflection, I feel fortunate to have had my first Flaherty experience at Pablo de Ocampo’s “History is What’s Happening.”  This challenging confrontation became emblematic of the struggle to talk seriously about documentary ideas, as a group, that I’ve experienced every time I’ve returned to the Flaherty—four times so far.

From Queen Mother Moore Speech at Greenhaven Prison [1973] by the People's Communication Network, which opened de Ocampo’s program, to its repetition at the very end, so much has stayed with me: Basma Alsharif’s Home Movies Gaza [2013], The Otolith Group’s People to be Resembling (2012), Deborah Stratman’s O'er the Land [2009], and Joyce Wieland’s Solidarity [1973].

I won’t forget sitting down for the first afternoon screening with no idea it would be Eyal Sivan and Michel Khleifi’s 272-minute Route 181 [2003]. The discussion of Mathieu Kleyebe Abonnenc’s Ca va, ca va on continue [It is ok, it is ok, we go on, 2012-13] led me to Édouard Glissant’s life-changing book Poètique de la Relation [Poetics of Relation, 1990]. And Jean-Paul Kelly’s Service of the Goods [2013] forever marked my thoughts on Frederick Wiseman's documentaries from the 1960s and 1970s about social safety nets and institutions.

After Sarah Maldoror’s Sambizanga [1972], I can never see Chris Marker’s Sans Soleil [1983] the same way again, an experience that was repeated with Sana Na N’Hada’s O Regresso de Amílcar Cabral [The Return of Amílcar Cabral, 1976] at the 2017 seminar.

More retreat than a conference or festival with overlapping panels and screenings, the Flaherty’s medium is the program assembled by the curator. As the week continues, the burden is on “captive” participants to take control of the seminar through discussion sessions and make it their own. Tension builds amidst interstitial coffee breaks, happy hours, late night conversations, and small group breakout sessions, demanding some form of response in the large discussion forum. This often results in a midweek bloodletting.

In 2013, this came with a performance by the BLW collective (Rozalinda Borcila, Sarah Lewison, and Julie Wyman): A Call to the Square [2013]. Lewison and Wyman read Queen Mother Moore’s speech, then invited participants to recite Asmaa Mahfouz’s January 18, 2011, call to join the January 25 protests in Tahrir Square, demanding an end to Egypt’s Hosni Mubarak regime.

Participants were invited to re-perform Mahfouz’s address in small groups, writing down their reactions. Intended or not, the exercise rehearsed the documentary proposition of re-presenting another’s physical performance or speech and re-locating its site of communication, necessitating confrontation with this new space of reassembly. The discussion that followed voiced important criticisms about how the exercise defined the seminar participant as white colonizing subject.

The problems brought to the surface by the performance reflected a central conceit of the seminar: the principle of non-preconception, originally instituted by Frances Flaherty at the earliest seminars. Revealing the nature of each film only as the projector’s light hits the screen (program notes are supplied later) is a constitutive feature of the seminar, which recruits its audience based entirely on the desire to return to its cinematic well and on the qualifications/theme of the announced programmer.

The principle reveals two diverging understandings: the notion that one can dispose of preconceptions versus a recognition that stripping typical curatorial pre-conditioning necessitates a different kind of controlled environment and requires that the group deal with different ways of preconceiving. This challenges the group to deconstruct habitual modes of preconceiving and embrace a shared yet always uneven vulnerability in imagining a more equitable space.

More often than not, the discursive spaces generated by the Flaherty remain embattled with normative power structures and defenses scraped down to blunt candor by cycles of sleeplessness, inebriation, and waking dreams in the cinema. This leads to moments of generosity, embarrassment, cruelty, and epiphany from veterans and first-timers alike.

The yearly exercise is a reminder of what it takes to honestly approach an art object, others’ reactions, and the ramifications of refining lines of separation and/or coalescing into general consensus.