Posted by Patricia Zimmermann at 6:37PM   |  Add a comment 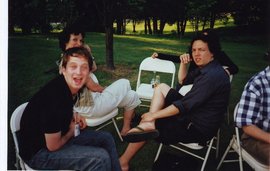 Ed Halter is Critic in Residence at Bard College in Annandale-on-Hudson, New York, and a founder and director of Light Industry, a venue for film and electronic art in Brooklyn. He recently edited, with Lauren Cornell, the anthology Mass Effect: Art and the Internet in the Twenty-First Century, and his writing has appeared in 4Columns, Artforum, the Village Voice and elsewhere. He curated the 2002 Flaherty Film Seminar and served on the International Film Seminar board of trustees.

Matt Wolf is a filmmaker living in New York. His films include Wild Combination: A Portrait of Arthur Russell [2008], the avant-garde cellist and disco producer; and Teenage [2014], about the birth of youth culture. His most recent short, Bayard & Me [2017], is about the civil rights leader Bayard Rustin.

EH: Do you remember when exactly we met at Flaherty? I realize I don't remember. I know it was at the 2001 seminar.

MW: We met the first night. You were with Sam Green and I introduced myself to you guys, and we started hanging out post-screenings and at night

EH: Oh, okay! So Sam was there too. Interesting. I didn't remember that. Did you already know Sam?

MW: I didn’t know anybody. I was 19 years old. I’m not even sure how I had heard about the Flaherty Seminar. Maybe my professor George Stoney at NYU had said something, or through my internship with Sandi DuBowski on Trembling Before G-D [2001].

EH: Do you have any special memories of that year? I remember seeing a lot of movies with you.

MW: I remember the first movie we saw. It was about a blind boy, and I believe he was listening to a go-cart race, but I might be remembering it incorrectly. Sight and its relationship to sound were a big theme that year. But of course the theme wasn’t sketched out in advance. It gradually revealed itself.

MW: Yeah that was it. I was very young so I had seen very little documentary or avant-garde film work. And when I saw that film, I felt like I had entered a special place where my mind would be cracked open. The other highlights of the seminar related to that theme of seeing.

EH: That's incredible. That film stuck with me as well over the years, and I think they showed an Arne Sucksdorff film about seagulls [Trut (“Seahawk”), 1944], which also stuck with me.

MW: Derek Jarman’s Blue [1993], The Heddy Honigmann film about military vets listening to music [Crazy, 1999], the blind photographers collective [the Seeing with Photography Collective gave a slide presentation with live narration entitled Shooting Blind]…they made me think about what it means to represent something you can’t see, which is still something I think about a lot.

EH: Honigmann’s work was also revelatory for me. I've loved it ever since and have watched a bootleg I have of Crazy many times.

MW: It’s incredible to watch people’s faces as they listen to a song that was meaningful to them during war, especially faces of veterans who you might expect to be fairly repressed or stoic.

EH: Yes and especially Dutch soldiers, who are only on supposedly humanitarian missions, but still have to live through wars. I’d forgotten about the Blind Photographers Collective. Derek Jarman's Blue—I remember I hadn't seen that film since it was brand new; I went to a preview screening in San Francisco. I remember that seeing the film print so distressed, with scratches and specks from the intervening decade, actually made me cry. I was thinking of friends I had lost.

MW: Yeah, I remember seeing you cry, and that was a consciousness-raising thing for me, for lack of a better word. I’ve seen Blue a number of times as a digital projection and it’s so much less powerful. There’s a kind of entropy to the print that seems appropriate.

EH: I've never watched Blue in its entirety as a digital copy.

MW:  Nowadays museums loop it on video but it’s so flat that way. Remember, they did a secret advanced screening of Hedwig and the Angry Inch [2001] too?

EH: Oh yes, that's right. That was fun. Emily Hubley's animations are the only thing I remember about that movie now.

MW: Did Emily and Faith Hubley show work that year too? It’s funny when you see so many films they start to blur together. I can say that every film I saw there was a revelation to me.

EH: I honestly don't recall, but I think you’re right. For me the big revelation was more the “Flaherty world”—that particularly eclectic crowd that Flaherty attracts. It wasn't exactly what I was used to in NYC film culture.

MW:  At that time, my film culture was the MIX Experimental Gay and Lesbian film festival or NYU film school. Flaherty was interesting because it was this place where experimental and documentary film intersected, and the discourse there was academic, but not in the basic film-school sense. There were these ethnographic-film anthropologist types, more theory-driven film studies professors, filmmakers, and students. And those distinctions were really flattened; it was a level playing field for everybody to discuss the films.

EH: Yes that was super interesting. Also I remember getting a strong sense of the “old days” a lot from members. And by that they meant the really old days, because people like George Stoney were still around and in attendance.

MW:  Yes, he was my professor at the time. It was exciting for me to be in such close proximity to real filmmakers. I gained access to information and ideas that I just wasn’t going to encounter at film school, particularly a traditional film school like NYU. And you were a big part of that. I remember a specific conversation we had between screenings.

EH: There was a lot of chatter about the controversies of the past too. Before I went, I recall many people in the Anthology crowd relating the story of George Kuchar getting attacked. They were like—those Flaherty people are crazy! Who would attack dear loveable George??

MW: Well attacking filmmakers is part of the culture there, and I’m not into that.

There’s a breaking down of boundaries I guess you could say.

EH: Maybe that's the price of the “anything goes” discourse at the Flaherty. It's not limited in any way, really.

MW:  I think good stuff comes out of that though, and I think because it is such a horizontal, open forum, people get an opportunity to speak who ordinarily might not be allowed to respond openly to a film. They’re not film critics or professors; they’re students like me. And I probably said some stupid shit to a filmmaker...

MW:  Yeah, it becomes less about the film and more about the different approaches to looking at films in general. The thing that you told me that was really transformative was that you can’t just analyze or interpret a film, you have to analyze it within the context of a particular historical moment. I guess on some level that idea seems basic, but it was radical to me at that time. It’s interesting because so much of the present critique of young students is that they look at things ahistorically and “problematize” them.

EH: That’s interesting. I'm not sure I would express that same sentiment in the exact same way today, but I can imagine myself saying that then.

MW: Well, in the context of Derek Jarman’s Blue, that was really meaningful. You’re not just responding to a blue screen right now, you’re responding to a blue screen as a spectacle experienced by people dying of AIDS and the people around them, and the scratches on the print are artifacts of the passage of time. That’s a way of representing something that can’t be seen.

EH: Yes. I think it’s about how all films happen in their own time, but they also happen again and again. For me, that 2001 screening of Blue was qualitatively different from when I saw it on its release.

MW: Yeah, that’s a more nuanced way to put it. I guess what I mean is that I wasn’t an adult during the height of the AIDS epidemic and seeing how you were reacting to that film in the theater helped me understand something that I couldn’t see. That was my biggest takeaway from the Seminar.