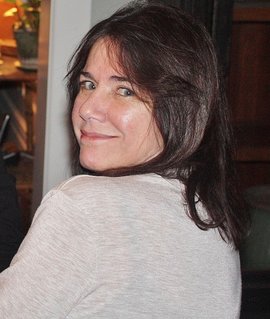 Patti Bruck is a filmmaker and educator. Her award-winning documentary and experimental films have screened at festivals internationally. From 1990 to 2014, she taught film and video production at the University of Colorado, Boulder. She has served on granting panels for the Colorado Council on the Arts, the National Endowment for the Arts, the Pennsylvania Arts Council, and on the Black Maria Film Festival selection committee.. She is currently a selection committee and programming advisor for the Boulder International Film Festival. She also served on the Boulder Arts Commission. She was President of the Robert Flaherty Film Seminar from 2002-2010.

I harbor a secret I rarely express: I often dread going to the Flaherty.

The long travel from Boulder, the inevitable delays connecting through Chicago O’Hare, and the first few nights of small talk and awkward discussions are not inviting.

Yet, the Flaherty Seminar has changed my life twice.

In the mid-1980s I was the program coordinator for the Western States Regional Media Arts Fellowship at the Rocky Mountain Film Center in Boulder, Colorado.

The Film Center had received a MacArthur Foundation grant to program a Learning Channel film series called “The Independents.” The first programmer was documentary video scholar Deirdre Boyle. Because my film education had centered on experimental work, I was unfamiliar with documentaries beyond the well-known theatrical releases.

I had many conversations with Deirdre. When I wanted to know more about the works she programmed, she commanded, “You should go to the Flaherty!”

A year later, film scholar Patricia Zimmermann, in Boulder for summer research, stopped by my office. During our conversation, she insisted, “You should go to the Flaherty!”

A flyer arrived at our office several months later announcing the upcoming 1987 Flaherty Seminar, entitled “The Media Construction of Identity,” programmed by Richard Herskowitz. By this time, I was a graduate student studying for my MFA in Integrated Media Arts at the University of Colorado. The Flaherty theme matched my interests. I was granted a fellowship to attend.

Shy and intimidated, I walked into the opening reception at Wells College in Aurora, New York, where scholars, programmers, and filmmakers had gathered into groups for conversations about film.

I spotted Patricia. She introduced me to a welcoming circle of her friends: Scott MacDonald, John Columbus, David Tafler, Sally Berger, Raul Zaritsky, and Richard Herskowitz. They remain among my dearest friends.

Each film created an argument with the one that preceded it.

Yervant Gianikian and Angela Ricci Lucchi’s From the Pole to the Equator [1987] and the works by John Akomfrah and the Black Audio Film Collective resonated with me. Some pieces were revolutionary. All challenged mainstream documentaries and cultural stereotypes.

The Dutch experimental documentary filmmaker Johann van der Keuken was the featured filmmaker, an eminence gris. What began as a contentious confrontation between Johann and participants over what were seen as his insensitive depictions of cultural rituals gradually evolved into affection and delight as his spirit and films charmed participants. As his humanitarian approach to diverse cultures became clear, the heated challenges evaporated.

During those years, the seminar included fewer than a hundred attendees. Affinities developed. Discussions spilled from the seminar discussion room into the dining room where large tables encouraged expansive exchanges that no one wanted to leave.

The following fall, armed with a multitude of new ideas and discourses, I returned to graduate school, where questions about radical feminism and “the Other” were boiling up. I felt a new confidence leading discussions and by the time I graduated, my reputation for sophistication about current political dialogues in media production had convinced the University of Colorado to hire me to teach video, then film production.

And I’ve marveled at the documentary films of Kazakhstan filmmaker Sergei Dvortsevoy and have been challenged by the unnerving Pavel Medvedev, maker of Vacations In November [2002]. I’ve witnessed angry confrontations with Austrian documentarian Michael Glawogger about his Workingman’s Death [2005], and I’ve listened to queer experimental filmmaker Kenneth Anger’s marvelous stories, and to participants raging over a surprise screening of the video of Daniel Pearl’s beheading.

Every seminar has been different, yet somehow the same.

In 2000, the Flaherty changed my life a second time. I was invited to join the board of trustees—an honor. Eventually, I became Flaherty Board president, serving for nine years.

During my first years on the board, the organization was in tumult. Personnel disruptions and waning income threatened the Flaherty’s existence. Yet many board members refused to give up the ship. I am forever grateful to Margarita de la Vega Hurtado who assumed the role of Executive Director in 2002. Her generous warmth, grace, and courage transformed the position and revived the Seminar

Over the decades, the Flaherty has changed. The number of participants has nearly doubled and as a result, the discussions have tended to lose the satisfying sense of a true seminar experience. The higher registration cost inhibits participants’ return. Cell phones and social media lure people away from mealtime discussions. The Flaherty’s reputation as an immersive retreat may now be more illusory than real.

Yet, at the end of each Flaherty week, the demanding schedule, difficult films, and complex discussions generate a crisis that breaks down barriers and resistance to new ideas.

Although exhausted and ready for the safety of home, I always know I’ve re-found my tribe.

The Flaherty is more than the films, the programmer, and even the organization. It sustains an increasingly rare opportunity for face-to-face interchange. For one week, participants come together with a yearning for a richer understanding and connection to film culture, and that yearning is rewarded.

The Flaherty is also the community we want and need. These days it’s hard to find. During the Flaherty week different layers of our intimacy with cinema, and with each other, gradually unfold.

The Flaherty. I came for the films. I come back for the community.