Posted by Patricia Zimmermann at 1:25PM   |  Add a comment 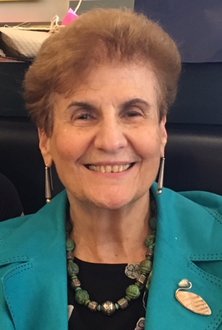 Margarita de la Vega Hurtado was Colombia’s first woman film critic. She taught at the University of Michigan in Ann Arbor and University of California Santa Cruz. She was Executive Director of the Robert Flaherty Film Seminar. She has served on the Houston Museum of Fine Arts film committee and the Aurora Picture Show board. A board member since 2008, she helped to create the Houston Cinema Arts Society. She has presented at film festivals, museums, and universities in the US, Latin America, Spain, and Germany. She also executive produced the Juan Manuel Echavarria documentary Requiem N.N. (2013-14), screened at the Museum of Modern Art, the Houston Cinema Arts Festival, and festivals worldwide.

I first attended the Flaherty Seminar in 1988. Julie Levinson programmed.

Growing up in Colombia, I was a Hollywood movie fan. I got involved in a cine-club that screened film classics, documentaries, and world cinema.

I worked at the first Cartagena International Film Festival in 1960, where I discovered the French New Wave. An article I wrote about it was published in a national newspaper.

I got married. I read a lot. I continued to write, about Colombian cinema and the New Latin American cinema. I moved to the US with my family, had three wonderful children, and went to the University of Michigan in Ann Arbor—home of many active film societies and the Ann Arbor Film Festival—to study film.

I’d heard about the Flaherty Seminar from Gabriela Samper, a Colombian filmmaker politically active in the Sixties. Somehow I figured out how to attend and drove from Ann Arbor to Wells College in central New York. I arrived at lunchtime and someone instructed me to sit at a table, which I did—and discovered that he person sitting next to me was Erik Barnouw, the author of the groundbreaking book Documentary: A History of the Non-Fiction Film.

Ruth Bradley, a friend from the American Culture program at Michigan, introduced me to Juan Mandelbaum and Patty Zimmermann, who have remained close friends.

The Flaherty became an annual ritual where I could see extraordinary films and meet filmmakers and theoreticians. It rippled through my studies, my intellectual development, and my teaching.

My best experiences at the Flaherty were instigated by artists and works that I loved immediately: the Black Audio Film Collective from the UK, and Barbara Hammer, Steina Vasulka, animators from Canada, African-American documentarians.

The Flaherty Seminar nurtured my passion for cinema, deepened my cinematic knowledge, and broadened my horizons. Eventually, I presented films and participated in the heated theoretical discussions.

But almost two decades later, I still think about one particular seminar.

In 1999, Richard Herskowitz and Orlando Bagwell programmed “Outtakes are History” with support from the Film and Video Program (Jane Gaines, in particular) and the Center for International Studies at Duke University, which hosted that seminar.

However, the new site seemed to generate uncertainty.

The next day, David D. Williams presented Lillian [1993], which had won a prize at Sundance and the seminar began to erupt. Williams’ feature focused on an African-American caretaker of children and adults. The director, a white filmmaker, had made the film in a cinema-verite style, telling the protagonist’s story with non-actors who performed in their homes in an African-American community in Richmond, Virginia.

As the discussion began, Ricky Leacock (Flaherty’s cameraman for Louisiana Story [1948]) jumped up and shouted, “And you brought me all the way from France to watch this shit?!” He left the room immediately.

The seminar participants included a group of African Americans, including Sam Pollard, Louis Massiah, and people from Eyes on the Prize. Ricky Leacock’s outburst seemed to have offended everyone, and the next day, the atmosphere was combative and loud. David Williams presented two short documentaries. Race and gender debates tore through the discussions.

When Elizabeth Bartlett showed an unfinished film [Stranger with a Camera, 1999], it was met with nasty comments. So the women at the seminar, including film editors Jacquie Jones and Jeanne Jordan, decided to meet together during “free time” for our own separate discussions.

Arthur Peleshian presented his films in this charged atmosphere. Critics and scholars recognized his complex conceptual editing style. Participants praised him. He answered questions, but without revealing much about his technique—while Mrs. Peleshian sat in the audience, her appearance summoning the Hollywood stereotype of a Russian matron.

Mrs. Peleshian went shoe shopping with the Russian/Armenian interpreter. When they returned, the interpreter mentioned that Mrs. Peleshian, ignored by almost everyone at the seminar, had worked as an editor with her husband. During their outing, she had shared their editing methods. This reminded me of Frances Flaherty’s collaborations with Robert. Our women’s group invited Mrs. Peleshian to join us.

At this seminar, divisions widened as racial and gender debates became part of every discussion. However, the fragmentation into smaller affinity groups made space for more in-depth conversations about our differences and deepened my understanding of how social and political contexts influence creativity and style.

I ended up using that seminar’s contentious debates to program a series focusing on diverse women filmmakers for the University of Michigan’s Film and Video Department.

The intensities and destabilizations at that 1999 seminar spurred me to attend the seminar every subsequent year, tossing aside my preconceptions just as I imagine Frances Flaherty would have wanted. And I committed to expanding the presence of Latin American and Latinx filmmakers and participants at the Flaherty.

I remain one of the Flaherty Seminar's greatest fans and advocates. I’ve supported the Flaherty as a participant, a programmer, a board member, an executive director, and a coordinator for the Flaherty fellows.

My week at the Flaherty became my favorite time of the year. I remain addicted.