Posted by Patricia Zimmermann at 4:23PM   |  Add a comment 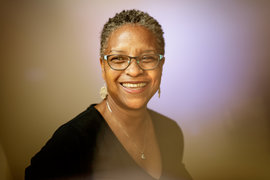 Portia Cobb is an Associate Professor in the Department of Film, Video, Animation & New Genres at the University of Wisconsin-Milwaukee. An interdisciplinary artist, her work draws from personal and collective histories  and  reconstructed memory. It fuses ethnography, personal essay, and folklore. Her documentary work spans moving image, photography, audience participation,  and performance. Performing Grace [2016] creates digital photographic essays, field sound recordings, and video to reflect Gullah-Geechee culture in the Low Country South Carolina barrier islands. Her work is inspired by place-bound/rooted identities and engages social justice issues emerging in the preservation of these historical places.

Twenty-six years ago, I presented four videos at the 1992 Flaherty Seminar at Wells College in central New York State.

It was my first and only Flaherty Seminar. I’ve never returned and was never invited back.

Kind and empathetic, Marlon Riggs, the black queer filmmaker, had recommended my work to programmers Austin Allen, Ruth Bradley, Scott MacDonald, William Sloan, Jackie Tshaka, and Lise Yasui. I had never worked with Marlon on set, but he invited me to view a rough fine cut of Black Is…Black Ain’t [1994] and gave me a consultant credit. I began to think of Marlon as a mentor.

I’d completed graduate film school at San Francisco State University. My 14-minute essay video, No Justice, No Peace: Young, Black, Immediate [1992], chronicled violent police behavior, media representations of young black men in the Bay Area, and the aftermath of the acquittal of the policemen in the Rodney King beating.

That seminar revolved around conditions governing access. I screened Drive-By Shoot [1992], No Justice No Peace, and Species in Danger Ed! [1989].

I also shared a work-in-progress audio-doc performance, Points of Departure for a Diaspora Dawta! [1991]. It featured exchanges between four women from different points of the African Diaspora (US, UK, the West Indies and the US Virgin Islands) sharing stories about home, place, forced movement, and exile. I’d recorded them at a kitchen table; each read an excerpt from bell hooks’s essay, “Home Place: A Site of Resistance.” I later developed it into an experiential multimedia installation, Home Places, for a University of Wisconsin-Milwaukee (UWM) campus gallery.

I think I presented this work just before Ken Jacobs’ “Nervous System” performance called XCXHXEXRXRXIXEXSX [various versions since 1980], but I may be mistaken.

I felt angry. I felt tricked into watching something offensive. When the lights came on, a lot of side-eye commenced between those sharing similar feelings. Guilt! The feelings of guilt and shame by the spectators were intense, and this had intensified the experience of the film and the discussion afterwards.

Over the years, I came to appreciate that experience, and I’ve recounted that screening many times to my students, other makers, scholars, and academics. This story marks me in the experimental landscape, underscoring my own agency and belonging.

During a short lunch break, film director Camille Billips filled a huge Super Soaker Water Gun. She slid the water gun under her chair on stage, then glared at every spectator, as if to say, “Go ahead, F**K with me!”

Camille’s Finding Christa [1991, co-made with James Hatch] followed her personal experience as a mother who surrendered her three-year-old daughter to an adoption agency. The film triggered responses from adoptees and fostered children. One woman became very emotional, describing other screenings during the week that had offended her and other women. Camille was criticized for lacking guilt or remorse. She had come prepared, but nothing jumped off. The Super Soaker remained unused.

Kazuo Hara’s The Emperor’s Naked Army Marches On [1987], the Cheryl Dunye shorts, She Don’t Fade [1991] and Janine [1990], and Barroco (Barroque) [1989], a lush feature by director Paul Leduc (Mexico/Cuba/Spain), presented by scholar Margarita De La Vega-Hurtado, stood out for me.

I spent intense time with the most powerful African-American women visionaries in film and public TV: Cheryl Fabio Bradford, Mable Haddock, and Jackie Tshaka. I considered them “big sister aunties.”

I was assigned to room with Mable Haddock, founder of the National Black Programming Consortium (NBPC). Mable asked me to switch rooms so she and Jacquie Jones could be dorm mates. I agreed.

Jacquie was a producer Mable later tapped to lead Black Public Media after her 2005 retirement.  They were very close. I learned of Jacquie’s death at 52 from cancer on Jan 28, 2018, as I was composing this reflection.

Sitting on the edge of dorm room bunks, these women smoked cigarettes like champions. A non-smoker, I suffered through their second-hand smoke to join their wise, candid conversations about the industry, life, and creativity. It was a rite of passage.

I smile remembering several pairs of woman-sized undies hanging to dry in our shared small bathroom. This image evokes unpretentious auspiciousness, familiarity, and these women, my indie foundation and family.

Between screenings, I recorded impromptu interviews with other seminarians with my Hi8 Sony Camcorder. I asked subjects to define a point of departure, a concept echoing my own journey. Folks were cooperative and a bit perplexed. I still have that footage.

During the seminar, UWM was courting me. Each day, I received notes from them on a common-area message board. They were negotiating my contract and arranging my move.

Two weeks after the seminar, I relocated from Oakland, California, to Milwaukee and began my career as an assistant professor and director of the Community Media Project at UWM. Twenty-six years and many adventures later, I anticipate retirement in a few years.

My first syllabi heavily reflected themes from that 1992 Flaherty Seminar. I introduced students to work from the West coast, festivals, and the Flaherty. The Midwest was puritanical compared to California. Milwaukee’s PBS station had declined to broadcast Marlon’s Tongues Untied [1989]. When I showed it to my class, some students refused to look at the screen or participate in discussion.

Jacquie Jones’ death conjures thoughts of collective and individual embarkations, and questions about whether one can ever return to anywhere. Departure and arrival, present and past tense, together. This reflection is circular. Back then, I was in rhythm with others embarking on their own journeys, and I witness similar launchings in my students.

That Flaherty put me among great minds, visionaries, and creative people shaping OUR movement, OUR history.

The Flaherty marked my psyche. Are the others I met there still active, healthy, and productive?