Posted by Patricia Zimmermann at 8:44AM   |  Add a comment 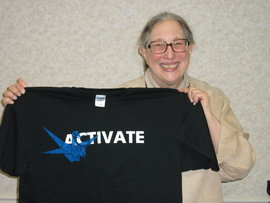 Linda Lilienfeld is the creator and director of Let’s Talk About Water. Linda has over thirty-five years of experience as a film and picture researcher, specializing in science and history on projects ranging from PBS documentaries to museum exhibitions and books. For the past ten years, she has served as a research assistant to Peggy Parsons, curator of the Film Program at the National Gallery of Art in Washington, DC. She has been a member of the steering committee and pre-screening committee for the International Water and Film Events (RIEC-IWFE.org)In 1992, Linda was inspired to create the LTAW project while working on an exhibit on global warming at the American Museum of Natural History in New York City.

This is my first blog post so I am not sure how to this but will do my best.

There, I’ve said it.

Who am I?  And why do I feel that way?  I will try to be brief—though I rarely am!

My name is Linda Lilienfeld. I have been a film and picture researcher for forty-five years, specializing in history and science.  I work in documentary film, PBS-type series, features, books, and museum exhibitions.

In 1992 I worked on an exhibit about climate change for the American Museum of Natural History in New York City.  The companion book was written by Andy Revkin. It was so compelling that it changed the course of my life. Climate change: what the f..k was that?  I mean, I’m from Brooklyn, what do I know about plants and animals?

But I realized it was a very important and complex subject.

So I started a project known as Let’s Talk About Water (www.letstalkaboutwater.com) where I bring scientists together in a panel discussion after a film showing connected to water, and do my best to instigate a dynamic interaction with the audience.  I try to get the scientists to speak more simply and clearly and let people feel comfortable to ask “stupid” questions—there are no stupid questions.  I try to make it fun. I work with the Consortium of Universities for the Advancement of Hydrologic Science (CUAHSI) cuashi.org.  We do events all over the world.

Water knits it all together and is a great point of entry for conversation about climate change.

So, why do I love The Flaherty Seminar?

Years ago, a colleague of mine, who is very reticent, had just come back from The Flaherty (whatever that was!).  He told me it was a week-long seminar where people watched film together, morning, noon, and night.  After each program, they would talk about it as a group and continue talking over dinner and into the wee hours of the morning.  They argued, fought, and agreed. They deepened each other’s insight into the films—and in some cases changed each other’s opinions of the film.

Each year when we would meet after a “Flaherty,” he could not stop talking—this person who barely said a word!

So he invited me to attend a Flaherty in 1976.  Now, in 2017, I have attended between twenty-five to thirty Seminars. How crazy is that?

My first time speaking to the group was utterly terrifying. I was clammy and hyperventilating. But I said my piece.  When I’d finally made public contact with the group, the experience deepened.

What is more amazing is how sad I was when it ended and I had to leave the “Flaherty family” and reenter real life.

Afterward my mind kept racing. It was hard to talk to friends who had not been at The Flaherty.

Shards of images continued to flash through my mind, along with connections between the films, the genius of the programmer, why one film sits near another in the sequence, the way those interconnections opened deep reflective thinking about beauty, love, conflict, process, change.  And what the filmmakers, who also attend the The Flaherty, had had to say.

The smorgasbord of films and ideas upon which we feasted would express a visual idea so compelling as to be breathtaking. I wanted that feast again and again.

The idea of leaving the real world behind, watching films all day long, spending time with wonderfully bright people to THINK, TALK and REFLECT about life—the good, the bad, and the ugly—is just so gratifying, challenging, and fulfilling.

The programmer has complete freedom—no censorship—to program what she or he wants. But we never know what it will be until the actual show.

No preconception.  What is that? RARE! In today’s world, everyone knows too much about everything before experiencing it.

Currently, we are housed on the beautiful and welcoming campus of Colgate University in Hamilton, New York.  Due to excellent administration of the event, we glide seamlessly between dorm rooms, not-so-bad cafeteria meals, walks to the screening room, breaks, discussion, happy hour…  We float through the magic as film upon film, day after day, unspools and chat after chat washes over us.

As a group, you become (which in fact we all really are) one big organism.  You pass people in the hallway. You might never directly talk with them and yet somehow you miss them when it is over. It is the way they said hello, or the fact you met at various intervals in a mysteriously synchronous way.  At the Flaherty, I’ve also made friends for life.

But the most amazing effect is how the Flaherty experience enriches my real life and my work—especially my work.

One of the most important challenges of our time is why people are in denial about climate change.  How can it be that scientists, geoscientists in particular, and hydrologists especially, know so much—and we know so little. How can anyone call climate change a “hoax?”

I think the problem and the solution is communication between scientists and the public, with universities as the conduit.

I took what I absorbed from The Flaherty and created the Let’s Talk About Water project.

I serve as moderator in many of the panels or as a consultant to the host university team. But I strive over and over again to recreate the life, the light, the warmth, the energy, the conflict, the resolution, the clarity that I have experienced at The Flaherty.

The process of The Flaherty gives me confidence to work against the grain of the quiet, reserved scientific community and to push them gently into The Flaherty Way.

We try to convey the power of an image, the many ways it can be read, and the ability to open minds with information, experience, context, and emotion to help us communicate our way out of oblivion.

Thank you, dear Flaherty Seminar.  As I said at the beginning, I love you.