Posted by Patricia Zimmermann at 8:57PM   |  Add a comment 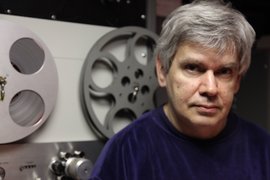 John Gianvito is a filmmaker, curator, and critic. He is Professor in the Department of Visual & Media Arts at Emerson College. His films include The Flower of Pain, Address Unknown, and The Mad Songs of Fernanda Hussein, Profit Motive and the Whispering Wind ,Wake (Subic) and the collectively-made Far From Afghanistan. Retrospectives of his films have been held at the VIENNALE Film Festival, I Mille Occhi Festival, and the Cinéma du Réel Festival.  He is the editor of the book Andrei Tarkovsky: Interviews (University Press of Mississippi). He also served for five years as curator of the Harvard Film Archive.

When I think back on the experience of programming the 2003 Flaherty Seminar, now fourteen years on, many memories readily surface.

I found myself unexpectedly unemployed in the year leading up to the seminar.

My efforts to research and review what had to have been literally hundreds of films in the lead up to the program consumed me.

I recall the regular spirited conversations and stalwart support I received from the Flaherty Executive Director Margarita de la Vega Hurtado and her assistant Brian Coffey.

I recall the countless email exchanges with curatorial colleagues around the country.

I recall the challenges of securing travel commitments from filmmakers whose production schedules were tentative at best.

As the program began to take shape, I remember actually sleeping with the schedule blueprint alongside me. I often awoke to jot down new ways to best orchestrate the sequencing.

I also remember the setbacks.

There was the filmmaker whose work I had hoped to showcase on opening night who informed me two months before the Seminar that he was likely going to be in Afghanistan working on a new film. He was unable to secure manageable transportation back and forth to the US for that week. So there was a push to quickly identify an equally strong and appropriate opening night film.

The Board decided to reduce the length of the seminar by one full day. I was informed late in the process and it discomfited me. This reduced length led to some memorable, hardly ideal, late-night Flaherty screenings. The midnight screening of Glauber Rocha’s two and a half-hour hallucinatory final masterwork, The Age of the Earth  was for many seminariarns an even more powerful experience, intensified by the lateness of the hour.

Hours after arriving at Vassar College, the site of the 2003 seminar, I learned that one of my guests, Travis Wilkerson, was suddenly unable to attend.

While I harbor many behind-the-scenes stories about the preliminaries leading up to the 2003 Flaherty, for me, recollections of the ideas and camaraderie exchanged throughout that special week stand as far more consequential.

From Argentina, Brazil, Canada, Israel, Japan, the Philippines, the US, the UK, and Vietnam, that week’s guests possessed a core commitment to confronting social and political injustice across many arenas and in many forms.

Some possessed a lifetime’s body of work. Some had only made one or two films. Despite differences in language, culture, age, and experience, I suspect the feeling for many of us Flaherty seminarians was that we were among our tribe. None of us needed to be convinced that mighty problems everywhere needed to be faced. Our concern was how to face these problems with our cameras.

One central thread of discussion focused on the eternal debate over the role that form and aesthetics play in engendering political efficacy.

During one discussion, I remember a remark by filmmaker Franny Armstrong, whose workmanlike journalistic approach to documentary stood far afield from the overtly impressionistic approach of Holly Fisher, the DIY in-your-face aesthetics of Matt McDaniel, and the hallucinatory epic-didactic poetics of Glauber Rocha.

Franny contended that it doesn’t matter what happens during a film, only what happens once it’s over. Armstrong claimed that results, not reviews, count.  Her own very first film, McLibel: Two Worlds Collide (1998), seen by an estimated twenty-five million viewers on television and the Internet, contributed to the global crusade against McDonald’s business practices.

During that seminar, I remember being profoundly moved and inspired by the sheer courage and tenacity of the filmmakers. Directors such as Raymundo Gleyzer and Joey Lozano openly risked their lives to make their work.

The under-recognized Vietnamese filmmaker Tran Van Thuy recounted how his own family turned against his making the extraordinary documentary The Story of Kindness. Thuy’s wife claimed that he was possessed by spirits!

Despite experiencing the hardship of his previous film, Hanoi in One’s Eyes, which the Vietnamese government had banned for five years, Thuy persevered despite many obstacles to produce The Story of Kindness. This essay film was propelled into being by a dying friend’s request to make a film on the subject of tu-te, a Vietnamese term that roughly translates as human relations, fraternity, or simply kindness.

Again, Thuy found his film banned, but following the personal intervention of Communist Party leader Nguyen van Linh, Thuy’s film was not only released but rapidly became a popular and influential work.

The practice and person of Noriaki Tsuchimoto occupied the heart of the week’s dialogue.

At seventy-four years of age, Tsuchimoto wrote to me in advance that while genuinely honored and excited about the prospect of attending the Flaherty, complications from diabetes might slow his participation and his ability to sit through the week-long program. I assured Tsuchimoto that he and his wife and collaborator, Motoko, need only attend their own programs.

As soon as the seminar got underway, it was clear that Tsuchimoto was drawn in by the experience. He attended every program.

Widely regarded as one of the two pre-eminent documentarians of Japanese cinema alongside his colleague Shinsuke Ogawa, Noriaki Tsuchimoto is most renowned for an extensive series of eighteen plus documentary films made over a thirty-five-year period on the impacts of toxic poisoning on residents of the fishing community of Minamata.

Among the earlier and later works of Tsuchimoto screened, the highlights were the screenings of his Minamata—The Victims and Their World (1971) and his Shiranui Sea (1975).

Tsuchimoto offered deep lessons about what being a committed filmmaker means.

He discussed his ongoing auto-criticism in the pursuit of pushing his work further.

Before home video or digital downloads, Tsuchimoto spoke about how he circumvented the traditional avenues of art house and television exhibition. He traveled widely around Japan and elsewhere, screening his films in nontraditional venues in small villages and community centers. He periodically stopped the films and discussed them with audiences, much like Octavio Gettino and Fernando Solanas did with their Hour of the Furnaces (Argentina, 1968)

Tsuchimoto discussed how much he had learned from the spiritual values of the Minamata victims, and he shared the difficulties and challenges of depicting their story well.

Tsuchimoto gave the seminarians the powerful maxim: Remembrance is Strength. He contended that this maxim constituted a fundamental belief of the documentary filmmaker.

The ongoing sustenance I draw from that one week in June of 2003 continues, I suspect, to prove Tsuchimoto’s point.