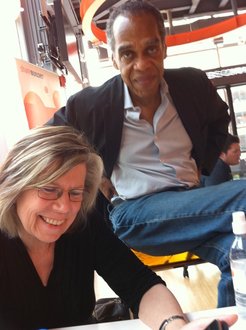 Anthony (Tony) Gittens is Founder and Director of the Washington, DC International Film Festival. He has served as Executive Director of the Washington, D.C. Commission on the Arts and Humanities, the District of Columbia’s cultural office. His major recognitions include Knight in the Order of Arts and Letters, French Ministry of Culture and Communications; the Mayor's Award for Excellence in Service to the Arts; Professor Emeritus of the University of the District of Columbia; and Public Humanist of the Year by the Humanities Council of Washington. The Eyes on the Prize Public Television series profiled him for his contributions to the Civil Rights Movement.

The 1986 Flaherty pivoted the seminar to align with exciting new contributions to documentary filmmaking.

The films we programmed in 1986 reflected the issues of the times: life in the developing world, the long struggles in the US against racism and for equal rights, the experience of searching for roots, the long reverberations of Brazilian dictatorship in Brazil, and indigenous, immigrant, LGBTQ, and other communities that had rarely been heard from before in documentary or highlighted at the Flaherty.

As community-based media organizers and film programmers, we had been deeply involved with creating platforms to showcase politically engaged work. We brought our commitment and background to using film to the Flaherty Seminar. We wanted to curate new voices into a meaningful, cogent program.

Esme Dick, the Executive Director of International Film Seminars, the organization that presents the Flaherty Seminar, invited Tony to program the 1986 seminar. At the time, Tony was a Flaherty board member and professor in the Learning Resources Division of the University of the District of Columbia in Washington, DC. He also founded and directed the university’s Black Film Institute.

“Everyone else on the board has programmed the seminar and you should have a turn,” noted Esme. Tony was the first person of color to program the week-long seminar.

Tony invited his long-time colleague and Flaherty attendee, Linda Blackaby, to co-program with him. At the time, Linda was Director of the Neighborhood Film/Video Project of International House in Philadelphia. We collaborated to conceptualize and mount the program.

Frances Flaherty’s principals of non-preconception and exploration guided us.

The traditional seminar structure consists of screenings and discussions. For filmmakers and media workers, the Flaherty Seminar offers a special experience, a movie camp filled with film watching and discussion by day, socializing and more discussion by night. Spectacular meteor showers over Lake Cayuga illuminated some of the nighttime discussions.

We wanted to create an inclusive and diverse seminar experience where filmmakers, films, and participants represented many ethnic, racial, gender, class, and sexual orientations.

We wove identity politics and independent cinema with countercultural and alternative views of social issues. We connected some of the new ways video, TV, and public media addressed the audience and innovated new storytelling methods and structures.

Most importantly, we brought rising star filmmakers of color to Wells College to present and discuss their work: Henry Hampton (with a preview of his American epic public television series on the civil rights movement, Eyes on the Prize [1987-1990]), Mira Nair (Mississippi Masala [1991] India Cabaret [1985], Monsoon Wedding [2001], Queen of Katwe [2016]), and Trinh-T Minh Ha with Naked Spaces: Living is Round. [1985]

Native American video artist Victor Masayesva insisted that his Itam Hakim Hopiit [1984] be screened without subtitles in order to assert the dominance of Hopi, his indigenous language.

We also invited international filmmakers who worked in different styles of documentary and experimental film.

Our seminar was the first to embrace video as a format equal to film. Rather than relegating video works to a sidebar, we deliberately presented them in the theater space.

Since our 1986 seminar, the seminar has regularly featured works by filmmakers of color.

In 1992, Linda founded the Philadelphia Festival of World Cinema. She co-programmed the 1998 Flaherty Seminar with Barbara (Bobbie) Abrash. Later, she was Program Director of the San Francisco Film Festival.

Looking back, it feels as if the most powerful meteor showers of the 1986 seminar were in the screenings, discussions and participants’ reflections where alternatives to dominant cultural narratives from independent and international media artists lit up the media scene.