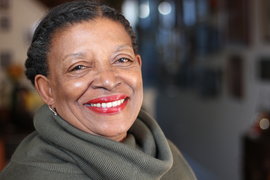 Alyce Myatt was director of Media Arts for the National Endowment for the Arts and founding Executive Director of Grantmakers in Film + Electronic Media. She served as Program Officer for Media at the John D. and Catherine T. MacArthur Foundation and Director of Children’s Programming and later Vice President of Programming at PBS. She has consulted with the Annie E. Casey and Skillman Foundations, Council on Foundations, WGBH, WNET, WNYC Radio, Center for Digital Democracy, Robert W. Deutsch Foundation, Heinz Endowments, Working Films, and others. She has produced for the Smithsonian Institution, Nickelodeon,3-2-1 Contact!, and ABC's 20/20.

I put that word in quotes because I mean impressed in its deepest sense: when something strikes you so hard it leaves an indelible mark.

The Flaherty Seminar impressed me, permanently imprinted my very being.

I first heard about The Flaherty as the program officer for media at the John D. and Catherine T. MacArthur Foundation. Various filmmakers we funded asked if I had ever attended. Discovering my cluelessness, they described the Seminar with what seemed to me a rather odd reverence.

I had a background in television. Although that world includes independent film as a small part of its complex ecology, my knowledge of independent media was limited. I began to ask myself, what is this thing called The Flaherty?

I attended my first Seminar in 2000. Kathy Geritz from the Pacific Film Archive programmed.

Experiencing film through Geritz’s careful curation and experiencing the intensive group discussions affected me in a way that was beyond my imagination at the time. I came away from that seminar with one simple question: “What is documentary film?”

Robert Flaherty’s films raise questions. Was he a documentary filmmaker? Was his approach to filmmaking cinéma vérité where the camera records actual people and events without directorial control? Is there even such a thing as a documentary film?

Although staged, these “documentaries” depicted authenticity.

By the time I was invited to join the Flaherty Board of Trustees, I was not only experienced in philanthropy, but also felt well-versed in independent film. I believed the seminars and the organization needed reframing to generate greater financial support.

In the early 2000s, funders saw the Flaherty as a very small specialized gathering. The number of seminar attendees was tiny compared to a film festival. Funders were unclear about the social return on an investment in what could be perceived as 150 people attending an elite film camp.

The Flaherty had not yet sold itself as a significant professional development experience for the independent media world, where intellectual, artistic, and global impressions move from the Seminar into the field and on to the public.

I knew from experience that the Flaherty changes attendees’ perspectives, ideas, and practices. It affects how they think, whether making content, or programming, teaching, or distributing it. Horizons open. Perspectives broaden. Transformation reaches innumerable members of the public through the subsequent work of the seminarians.

In 2005, at the 50th Flaherty I’d heard Russian filmmakers describe how seeing Marlon Riggs’ Tongues Untied [1989] at the 1990 Flaherty seminar held in Riga, Latvia, had changed their perception of African Americans and gay men.

In 2007, at the Full Frame Documentary Festival in Durham, North Carolina, I’d seen films about Africa, but not made by Africans. That same year, Mahen Bonnetti and Carlos Gutierrez programmed a Seminar called “South of the Other.” Mahen and Carlos brought filmmakers from Africa and Latin America to the Flaherty, a major intervention into the US media arts field.

Generally, film festival discussions center on fundraising, production, distribution deals, publicity. In contrast, the Flaherty is about intense interactions about artistic perspectives, ideas, the deeper meanings and impact of media, philosophical questioning, politics. For me, The Flaherty kept provoking that important question: what is documentary?

In an age of reality television, user-generated media, and fake news, truth is ever more pressing. Everything is up for redefinition. Do we need to abandon sacred terms like “documentary”?

A few years ago, I asked a group of filmmakers whether we might use the term nonfiction film instead of documentary. I came to this idea after a conversation with a stranger who was reading a great nonfiction book I had recently finished, Erik Larson’s In the Garden of Beasts [2011]. This stranger admitted never having thought of attending a documentary festival: that meant nature films, a perception shared by much of the general public.

A confession: I’m not a fan of what’s generally referred to as “experimental film” or “avant-garde film.”

In 2004, the year after the US invaded Iraq, Susan Oxtoby curated a seminar featuring experimental and avant-garde films. While I could respect those films as works of art, to me the programming felt utterly irrelevant in the global context. I soon left the Flaherty Board. I no longer felt comfortable asserting that the Seminar was always wonderful—as I was asked to do at the time by a few trustees.

Ultimately, I want films that help me to consider the human condition and move the audience to improve it. But although it may seem like a contradiction, I do long for films that explore new forms.

John Gianvito programmed the 2003 Seminar. Fifteen years later, the films John showed stay with me, their marks, indelible. For example, one of my all-time favorite works, Travis Wilkerson’s An Injury to One [2003], tells the story of murder, labor vs. corporate interests, and environmental disaster in Butte, Montana. It combines music, text-on-screen, an extraordinary cinematic eye, and a unique story structure. The reviews described it, correctly, as “avant-garde”—a useful kind of “avant-garde.” Although the events in Butte happened over a hundred years ago, they remain politically and environmentally relevant. I would love to see more US nonfiction films tell their stories in such unique artistic ways.

And since the 2016 US presidential election, Raoul Peck’s Profit And Nothing But! Or Impolite Thoughts on the Class Struggle [2001], a nonfiction (and “avant-garde”?) film from John’s Seminar, still haunts me.

I keep thinking about a sentence the film repeats: “Okay, Capitalism, you won. Now what?”