Excess, Inexperience, and Coming of Age at the Flaherty: Sami Van Ingen

Posted by Patricia Zimmermann at 5:57PM   |  Add a comment 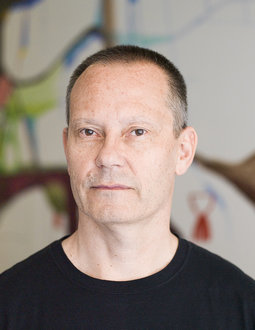 Sami van Ingen is a Finland-based experimental filmmaker, installation artist, curator, and educator.He has made over thirty films probing the act of seeing through deconstructing, manipulating, and rephotographing found footage such as home movies, travelogue scenes, mainstream blockbusters, or archival discoveries. His films have screened at the Edinburgh Film Festival, Image Forum Tokyo, Kurzfilmtage Oberhausen, Bienal de la Imagen en Movimiento in Buenos Aires and at the National Gallery of Art in Washington, Centre Pompidou and Anthology Film Archives. He has also published Moving Shadows: Experimental Film Practices in a Landscape of Change (2012).

I had just spent time in the south of England shooting my new film about memory and coincidence. With my 16mm Bolex, I’d wandered around Europe, revisiting places I had been and spontaneously reacting to these encounters. It was 1995.

I lived in Helsinki, Finland, and knew only two people attending the seminar: Phil Hoffman and Monica Flaherty.

Phil and I had been invited to present our film Sweep [1995], which critiqued traditional strategies of representation in documentary films. Monica Flaherty was my grandmother’s sister. She would be presenting her own project.

Within the Finnish film scene, Sweep’s open-ended, self-reflective, radical form had stirred debate. In our film Phil and I problematize Robert Flaherty’s trip to Thunder Bay on his way to film Nanook of the North [1922]—when he was 33, the same age as I was when we made Sweep. I had no idea if our film would resonate at the Flaherty Seminar.

I shared my dormitory room with Riyad Wadia, a filmmaker from India who was the grandson of J. B. H. Wadia, the founder of Wadia Movietone Studies. Riyad was also one of the first openly gay filmmakers in India. Like me, he was attending the Flaherty for the first time.

Riyad was two years younger than me, but I remember him as a much more mature, dedicated, and knowledgeable filmmaker than I was.

In his post-screening sessions, Riyad discussed his family history and talked about his family’s archive of Indian films. He shared his own very personal and touching film, Fearless: The Hunterwali Story [1993], about Australian actress and circus artist Mary Ann Evans, a 1930s Hindi cinema action queen who did her own stunts. She was known as Fearless Nadia or Hunterwali.

During the Flaherty week, screenings, common meals, and discussions merged in a flurry of activity and people. I never contributed to the post-screening discussions. Listening to the abstract academic jargon, I felt clueless. Verbose commentators aggressively slashed at my fellow media artists. The discussion petrified me.

Maybe because both of us came from outside the North American academic and filmmaking community, we shared similar impressions of our first Flaherty. We witnessed the slightly hysterical expressions about “Flaherty family” among longtime seminarians, who revealed an awe-inspiring familiarity with each other. It felt like a cult, a friendly and kind-spirited cult.

I felt much less freaked out expressing these observations with Riyad.

My father’s family were descendants of Dutch colonials from south India. Riyad’s family were Parsees from Bombay. Our shared background but different family histories intensified our connection. After the seminar, we stayed in touch. Sadly, I never met him again in person. He passed away in 2003.

At some point, Monica Flaherty, one of Robert Flaherty’s three daughters, presented her Moana with Sound [1981].

Monica had spent years creating an atmospheric—and in her words, authentic— soundtrack for her father’s and mother’s 1926 film Moana of the South Seas. Although her 16mm print of Moana with Sound was more than ten years old, Monica zealously carried it from screening to screening. She seemed desperate to protect the reel of plastic from loss, damage, and the evil eye.

Monica was defensive. She aggressively protected the Flaherty legacies. She refused any new readings of the film. I did not imagine that years later I would devote a large part of my life to salvaging and restoring her Moana with Sound project.

Philip and I finally screened Sweep. I understood very little of Sweep’s post-screening discussion. Phil answered some questions. The discussion bypassed all our ideas to critically interrogate heroic male road trips in documentary.

On the way out of the theater, I joined Monica for the walk to the discussion room. I was curious for her feedback. I’d shot an entire scene at the Flaherty farm in Vermont. Despite the fact that I was her grandnephew, Monica had been reluctant to grant permission. She had grave concerns about how I might deal with the myths of Robert Flaherty’s genius.

Monica and I walked slowly. She was seventy-five at the time. She did not seem to want to comment on our film.

Finally, I asked for her thoughts on Sweep. She offered one frosty comment: the credits misspelled her surname. After all my anticipation of a challenging discussion about representations of the exotic, the problems of non-preconception, and our common family heritage, her comment was a downer.

As the week rolled on, I met many serious, dark-clothed people from New York City. They seemed to know everyone. I also met fellow artists dedicated to their causes. All were interesting, insightful, and generous.

Slowly but surely, Flaherty seminar traditions sucked me in.

On the last day, I took my Bolex over to the Wells College golf course. I’d enlisted Phil as a stunt person.

With new creative vigor germinated at the seminar, I returned to my work-in-progress about memory and coincidence. I filmed two rolls of silly golf antics. We sped around the course in the golf cart. One golfer had a black Lab. That beautiful black dog, glistening in the midday central New York sun, kept us company.

I used nearly every frame from those two rolls in the film I titled Texas Scramble [1996]. Texas Scramble is a particular way for a group of golfers to play together. After each shot, all agree to hit their next ball from the position where one of the golfer’s balls has landed. In some odd way, Texas scramble seems to correlate with how I experienced the 1995 Flaherty Seminar.

Tags: Moana, Monica Flaherty, Nanook of the North, Robert Flaherty, Sami van Ingen, The Flaherty, The Flaherty Seminar, THE FLAHERTY: DECADES IN THE CAUSE OF INDEPENDENT CINEMA