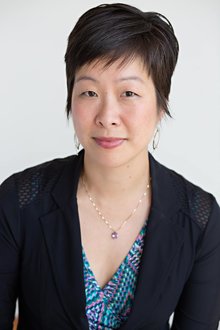 Grace An is Associate Professor of Cinema Studies and French at Oberlin College, where she has just finished a term as Director of the Cinema Studies program. She has published on directors Olivier Assayas, Alain Resnais, Chris Marker, as well as actresses including Jane Fonda and Delphine Seyrig. Her teaching and research interests include 1968, the documentary and essay film, militant cinema, and French feminisms. She is currently writing the book Disobedient Muse: Delphine Seyrig, Feminism, and The Cinema.

The Flaherty Seminar gave me access and exposure to many of my cinematic, cultural, and intellectual “firsts”: first viewings of experimental and avant-garde film, a first immersion in documentary and non-fiction, first encounters with militant cinema, film collectives, and microcinemas.

Generally, the filmmakers I had studied in school were too lofty or distant to engage with in person. But once the Flaherty came into my life, my timid self was able to work up the courage to describe my response to Eve Heller’s Glint [2001] and Her Glacial Speed [2002] to the filmmaker herself. This foray rewarded me with the many conversations that followed, both with Heller and other filmmakers. Those conversations, surrounded by the murmur of constant revelation and the chorus of dissonant and searching voices, became the foundation of my engagement with the world of film.

My first exposure to the Flaherty occurred in the fall of 1996, three weeks into my first semester of graduate school at Cornell University.

I’d arrived at Cornell with the intention of specializing in the literature of Francophone North and Sub-Saharan Africa. I hadn’t even heard of Robert Flaherty. I enrolled in Tim Murray’s film seminar, my first film course ever, and was brought over the hills to Ithaca College, where I met Patty Zimmerman and found my way through a weekend of Flaherty programming.

Several years later, in June 2004, I accompanied Patty to the Flaherty Seminar at Vassar College to participate in a special program designed for the 50th anniversary of the Flaherty Seminar, titled “Arctic Requiem.” This experience served as the other bookend of my Ph.D. studies, which launched a career as a professor of French and Cinema Studies.

The 2004 Seminar began with Michel Brault’s Pour la suite du monde/For Those Who Will Follow [1963], which took us to the Lower Arctic region of Canada where a French-Canadian village reconstructed the tradition of a whale hunt. With Richard Leacock in the Flaherty audience, cinéma-vérité and cinéma direct assumed expanded texture and resonance for me.

The film history books and theoretical texts I’d absorbed during the Ph.D. process stayed on the shelves of my brain as the Seminar brought me up close, personal, and political with the real people and real stuff of film. I learned about Jennifer Reeves through her films, Fear of Blushing [2001], He Walked Away [2003], and The Time We Killed [2004]. After watching Killer of Sheep [1978], I felt honored to be in the presence of Charles Burnett.

I’ll never forget the generosity of Scott MacDonald, who spent an evening reconstructing the critical context of certain interventions that had troubled me that day. I learned about specific histories shared by specific individuals in this community—sometimes harmoniously, sometimes not.

For the “Arctic Requiem” performance, Patty Zimmermann directed a team of musicians and scholars in an event that included a ritual screening of Nanook of the North, this time in dialogue with performances by violinist Ritsu Katsumata and vocalist Louise Mygatt, combined with theatrical and lighting effects by Phil Wilde and Ann Michel, and contributions by fellow professor Anna Siomopoulos and myself.

Patty paid special homage to the Seminar’s history of relationships between the critical and the artistic, as well as between the scholarly and the performative. We performers invoked Frances Flaherty and infused the experience of Nanook with our shared feminist sensibility, so that it would honor the traditional aspects of Robert Flaherty’s film and Francis Flaherty’s seminar, yet see them anew.

Many seeds were planted that June.

Most importantly, who knew then that I, at the time ensconced in auteurism and French national cinema, would be working today on militant cinema and feminist video collectives in a book project on actress-agitator Delphine Seyrig, who forged new definitions of the political actor and rejected the role of the female muse in male auteurist cinema of her time?

Who knew I would be visiting with Ulrike Ottinger, also there at the seminar in 2004, for a week in Berlin during October 2017? Ottinger was the last filmmaker to work with Seyrig.

It took me a decade to fully appreciate the Flaherty’s imprints on my work and life. It exposed me not just to actual filmmakers, but to avenues beyond the disciplinary apparati of my fields.

For me there would be no more hiding in disciplinary bunkers after the Flaherty, where participants simply did interdisciplinarity without wearing it as a banner. I’ve often wished that such ease and seamlessness could more fully characterize what we call “interdisciplinarity” in the academy.

Ultimately, the Flaherty is about cinema, not cinema studies. What a gift to take with me into the first of many semesters of a teaching career that has been driven by the motivation to learn and relearn the life practices of empathy, engagement, embodiment, and community.

I’ll be forever grateful for the Flaherty training in seeing anew, according to what Frances Flaherty called “nonpreconception,” as I/we continue to grapple with the ever-evolving relationships between the pragmatic and the utopian, the documentary and the experimental, the indexical and the imaginary, the dream and the struggle.

The Flaherty “finishing school” for graduate students, as Patty Zimmermann sometimes calls it, was the beginning of so much. Yet if I’ve learned anything from the Flaherty, it’s that there is no single beginning and no single ending to anything.

Multiple beginnings and endings—the Flaherty is all that for me.