Click here to see a video of Nicholas Walker in the recording studio with singer/songwriter, Tenzin Chopak, violinist, Rosie Newton, and Greg Evans. The tune is Just Don't Go, and available here.

Nicholas Walker grew up in Rochester, NY and began playing music with family, friends, in the community and in public school. He studied formally at Rice University, the Rabbath Institute at the Nadia Boulanger Conservatoire de Paris on a Fulbright Scholarship in 1994, and at Stony Brook University where he earned a Doctorate in 2004. From 1995 to 2005 Walker worked as a freelance musician and band leader in NYC. He has been featured on two dozen CDs, three as a leader, and has frequently been heard on NPR's Performance Today Walker is a Professor of Music at Ithaca College and President of the International Society of Bassists.

Walker is an accomplished musician who brings a broad range of training and experience to the double bass: classical and jazz, modern and baroque, solo recitals and chamber ensembles, his enthusiasm and aptitude transcend arbitrary musical boundaries. Walker is the President of the International Society of Bassists, and served as the 2017 Artistic Director and 50th Anniversary Convention.

Walker earned his DMA in Early Music at Stony Brook University in 2004. Formerly Walker studied with Paul Ellison at the Shepherd School of Music, Rice University, where he received a BMA in 1994. Walker has also apprenticed with two master mentors: for three years he toured with swing era saxophone legend Illinois Jacquet, and for the last twenty years Walker has worked closely with the pioneering maestro of the double bass, François Rabbath. As a Fulbright Scholar (1994-95) he worked with Rabbath at the Nadia Boulanger Conservatoire de Paris, and has since received two diplomas from L’Institue International Francois Rabbath, one in performance, and one in teaching.

Walker's exuberant and versatile performances on string bass have made him a sought after performer in many styles. He has given solo bass recitals on four continents, and has performed at music festivals worldwide. Walker has played with jazz masters such as Illinois Jacquet, Hank Jones, Frank Wess, Wynton Marsalis, Steve Turre, and Clark Terry, as well as progressive players from a younger generation, Bill Charlap, John Stetch, Aaron Goldberg, Matt Ray, William ‘Beaver’ Bausch, Paul Carlon, and John Ellis.  Walker has recorded with Cuban jazz luminaries, Juan Pablo Torres, Paquito D'Rivera, Horacio ‘El Negro’ Hernandez, Jose Fajardo, and Giovanni Hidalgo.  Walker has also worked with Cabaret artists Blossom Dearie, Anny Gould, Steve Ross and others, as well as with the bandoneon Tango virtuoso, Daniel Binelli. An active chamber musician, and New Music enthusiast, Walker is a member of the multi-media ensemble, Ardesco, and Pulitzer Prize winning composer Steve Stucky’s, Ensemble X.  Walker has performed with The Handel and Haydn Society Orchestra, a period instrument ensemble under the direction of Roger Norrington and Christopher Hogwood, and also with the The St. Petersburg Chamber Philharmonic, under the direction of Jeffery Meyer, the Oslo Philharmonic, and the National Arts Center Orchestra of Canada.  In the fall of 2010 Walker premiered a new concerto by composer Dana Wilson.  In 2011 Walker was a featured performer at the International Society of Bassists convention in San Francisco, and also at BassEurope Berlin. In 2012 he was a featured artist at the Premier Central Conservatory Cadenza International Double Bass Festival, Beijing, China.

An inventive composer, Walker features the string bass in solo, chamber music, and improvisational contexts. Walker's Six Duos for Double Bass and vln/vla/or cello have been featured multiple times on NPR's Performance Today. In 2017 his Eight Duos for Double Basses were premiered at the ISB Convention by Matthew McDonald and Rick Stojtin. In 1998 the International Society of Bassists awarded him Grand Prize for his composition, EADG for Solo Bass, and in 2013 the ISB commissioned his composition, Chorale, for the international solo competition. Other commissions include Little Newt for the Charlottesville Chamber Music Festival; a sextet, Magnus Caligus, and a bass/viola duo, Song of Freia, for Ardesco, and Pop Song for String Bass and String Orchestra for the New York State American String Teachers Association, which Walker has performed with the University of South Carolina Orchestra, the NYASTA Faculty Orchestra in Ithaca, at the Autumn Bass Workshop in Adelaide, Australia, in Saratoga Springs, in Boston, and with the Cornell Symphony Orchestra.  In 2008 his composition, Paris Skies, will be featured on a Hospicare CD.  In 2009 Walker premiered his Grease Fantasy for bass and piano.  Walker was also featured performed his Grease Fantasy with Chris Kim and the Cornell Chamber Orchestra in the spring of 2010, at the 2010 Berlin Double Bass Festival, the 2011 Kaleidoskop Double Bass Festival in Germany, and the 2012 International Double Bass Festival in Beijing, China.

As Professor of Music at Ithaca College, Walker demonstrates the art of playing in the broadest sense: he shows the full capacity of the instrument, and guides students to new levels in the traditional repertoire, early music, new music, jazz music, as well as in the art of improvisation and creative collaboration. (To see a video presentation about the Ithaca College Bass Studio, click here.)  Walker has been on the faculty at the BassWorks Festival in Adelaide, Australia; the Domaine Forget Music Festival, Quebec; at the Rabbath Institute, Washington, D.C.; and he has lectured for the International Society of Bassists, the New York American String Teachers Association/National String Orchestra Association, the Suzuki Association of America, and for the New York State School Music Association on bass pedagogy. Walker has given masterclasses and recitals at Peabody, Baldwin Wallace University, the Cleveland Institute of Music, Nazareth College, the Eastman School of Music, at Oberlin College, the New England Conservatory of Music, Sookmyoung University in Soeul Korea, Concordia College in Adelaide Australia, at the Rimsky Korsakov Conservatory of Music in St. Petersburg, both the China and Central Conservatories in Beijing, as well as at conservatories in Oslo, Amsterdam, the Hague, Rostock, Leipzig, Hannover, and Berlin. Before beginning as a full time faculty member at Ithaca College, Walker was on the faculty of the Stony Brook Pre-College Program, the Music Conservatory of Westchester, and Mansfield University. 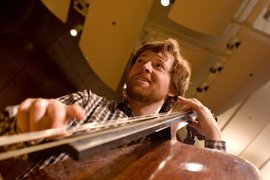