I retired at the end of the Spring 2018 semester.

Kit was an instructor in the biology department at Ithaca College since 1991, teaching in "Fundamentals of Biology" and "Primary Human Anatomy" for Physical and Occupational Therapy majors.  She has also taught "Human Physiology", "The Biology of Aging", "Field Ornithology", "Biology of Birds" and laboratories in "Animal Physiology" and "Principles of Biology" for biology majors.  Kit has served as a reviewer for "Inquiry into Life" lab manual by Sylvia Mader and the "Anatomy and Physiology Revealed" cadaver dissection interactive program for McGraw-Hill.  Since 1985 she has conducted research every summer at the Queen's University Biological Station north of Kingston, ON, Canada.  Her published papers include studies into the anti-bat flight activity in sound producing versus silent moths and the persistence of ultrasonic hearing in diurnal moths.  She began meditation practice in 2010 and has participated in panel discussions on the neuroscience of meditation.

I have a variety of research interests all of which relate to behavioral ecology and evolution. During the summers I conduct research at the Queen's University Biological Station north of Kingston, Canada.  I am on the Q.U.B.S. Executive Committee which oversees the operation of the research station.

My research was conducted with a group led by James Fullard (Univ. of Toronto at Mississauga) studying the daily flight patterns of moths and butterflies and the defenses these insects have evolved against predation by bats. James passed away on March 6th 2010 after a 2 year battle with pancreatic cancer.  The Nature Conservancy and Rideau Lakes Land Trust have purchased Sugar Bush Island on Lake Opinicon and will name it in his honour (see  http://www.facebook.com/#!/group.php?gid=352265971571 ).  I have been supported by several grants from the Provost's office at Ithaca College.  In the summer of 2007, Andrew Furfaro (I.C. Biology '08) participated in several research projects involving bat/moth interactions.

In the summer of 2005, I worked with Patrick Weatherhead (Univ. of Illinois, Champaign) collecting data for a long-term study of sex ratios and the effect of climate change on nesting in red-winged blackbirds.  The research has since been published in the Journal of Field Ornithology(2007 Vol. 78:428-435).  I have also collaborated with Mark Forbes (Carleton Univ., Ottawa) on projects investigating the coevolution of parasitic water mites and their dragonfly hosts.  I have recently developed an interest in contemplative education and the connections between neurobiology and meditation.  I am studying the Mind-life Dialogues initiated by scientists and his Holiness the Dalai Lama in conjunction with a group of scientists and Buddhist scholars in Ithaca. 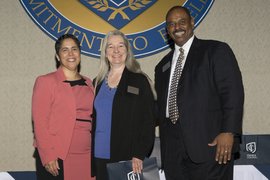