Check out some of Mike's newest videos on his YouTube page

Percussionist Mike Truesdell is thrilled to be a part of the Ithaca College faculty!  As a performer, he explores both the music of living composers as well as music steeped in past traditions.  As a soloist, he is a 2nd-prize winner of the TROMP International Percussion Competition in the Netherlands, and continues to maintain an active performing schedule around the world.  Additionally he has performed with numerous ensembles, including the New York City Ballet, International Contemporary Ensemble, Lucerne Festival Ensemble conducted by Pierre Boulez, and with members of the New York Philharmonic, Metropolitan Opera, Chamber Music Society (New York), and Alarm Will Sound, among others.  He has recorded with Renée Fleming, Vanguard Jazz Orchestra (Grammy® nominated), Charles Wuorinen, Gil Evans Project (Grammy® nominated), in addition to co-producing the Zeltsman Marimba Festival double-disc recording of the commissioned Intermediate Masterworks for Marimba.

Mike’s interest in music from around the world nurtured the formation of Spectrum Trio, a group that drew upon influences of rock, jazz, R&B, soul, electronica, John Cage, Karlheinz Stockhausen, among others, and integrated the styles with music of Ghana, Mali, Guinea, Brazil, Cuba, and the Middle East.  Spectrum Trio presented a full-length clinic/performance at the Percussive Arts Society International Convention on ways to approach the fusing of musical styles.

As an educator, Mike has previously been on the faculties of University of Northern Colorado, Rutgers University and Columbia University.  During the summer months, he can be found at the Zeltsman Marimba Festival, the nief-norf Summer Festival, the Composer’s Conference and Interlochen Arts Academy, among others.  Also engaged with mentoring the next generation, Mike has taught in the acclaimed Music Advancement Program at The Juilliard School, and founded Wildcat Percussion Camp, a summer percussion program to introduce aspiring percussionists to the spectrum of percussive sounds and techniques.  He has been featured in concerts and master classes around the United States, Europe and Asia.

His interest in collaborations led him to explore the early collaborative work of Igor Stravinsky, Histoire du Soldat (Soldier’s Tale) as the subject of his doctoral dissertation.  As a recipient of a Presser Award, Mike investigated the sketches, manuscripts, letters, original drawings and other primary sources affiliated with this work in Basel, Winterthur and Morges, Switzerland in the summer of 2015.

A native of Wisconsin, he attended Lawrence University (his teacher Dane Richeson is an Ithaca College graduate!) and moved to New York to study at The Juilliard School (Master of Music and Doctor of Musical Arts), where his primary teachers were Dan Druckman, Greg Zuber, Markus Rhoten and Gordon Gottlieb.  More information about Mike can be found at www.miketruesdell.com 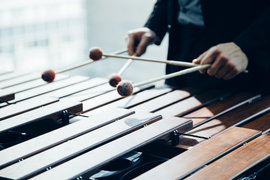