ITHACA, NY — Though many people suffering from neurological conditions such as cerebral palsy and Lou Gehrig’s disease have lost their ability to speak, they can communicate using augmentative and alternative communications (AAC) devices such as keyboards, head sticks and other hands-free options. Nonverbal people, however, are also susceptible to feeding and swallowing problems (dysphagia). In late 2006, Ithaca College faculty member and speech pathologist Mary Pitti and her colleague Liz Begley (an AAC specialist now on staff at College Station Medical Center in Texas) made an eye-opening discovery: AAC devices offering icons and software applications for dysphagia sufferers were nearly nonexistent.

“With perhaps the exception of autism, many clients who are nonverbal or have complex communication needs are likely to have some feeding or swallowing problems,” said Begley. “Yet when we started examining all the device libraries, there was not one script that was preset where we could drop in to say ‘This is how my food needs to be prepared’ or ‘These are my cautionary notes on foods.’”

Pooling their resources, Pitti and Begley addressed the problem by developing a safe swallowing protocol and, from that, a set of icons called “SmallTalk Dysphagia,” which is available on AAC devices through Lingraphica and also as an application for the iPod Touch and iPad for a cost of .99 cents. By serving as a checklist for caregivers and clinicians whose primary expertise may not be dysphagia, “SmallTalk Dysphagia” ensures that a patient’s mealtime and swallowing-related concerns are met.

“SmallTalk Dysphagia” currently has 54 icons and phrases such as “I need a special cup” or “I need to drink thickened liquids” and four videos demonstrating more complex concepts. The icons are arranged sequentially to coincide with the start and conclusion of a meal.

A major consideration in creating the icons was making them immediately understandable to patients.

“Since one of the main populations served by this protocol is people with some sort of neurological event, memory problems can often be an issue,” Pitti said. “As a result, we carefully considered what each icon would look like and tried to make it as transparent as possible. The overarching goal was making sure that verbally limited or nonverbal patients have the same decision-making access as a verbal patient.”

“People who are verbal can say, ‘I'm done; I’m not doing that anymore,’” Begley added. “Being able to convey that information is equally as important for nonverbal populations. It gives them the opportunity to change their mind. Verbally, you can change your mind in one sentence. But if nonverbal people don’t have that option readily available, a caretaker who is not familiar with dysphagia might not anticipate they want to say that.”

Because quality-of-life and end-of-life issues were also important considerations, Pitti and Begley addressed issues such as alternative feedings, the ability to refuse diet changes or treatment techniques, and the ability to decline a medical procedure or issue advance directives.

“If patients have the will and ability to do that, we need to give them an avenue for it,” Pitti said. “In regard to change or progress, few people stay the same. If they are improving, the icon library at their fingertips needs to be able to allow for that. If they have a degenerative condition and are expected to decline, the device needs a full range of icon options, so they can select what is accurate for that given time — a regular diet, ground diet or puree diet.”

Pitti and Begley consider the application and SSAE protocol the beginning of a larger undertaking to serve the unique needs of patients who require both AAC- and dysphagia-related care. They hope to design more dysphagia icons, as well as obtain input and collaboration from other speech-language pathologists across all scopes of practice.

Dysphagia icons and videos are available through Lingraphica and iTunes app store at http://www.aphasia.com/slp/support_smalltalk_dysphagia.aspx.

For more information and to arrange interviews, contact Mary Pitti at mpitti@ithaca.edu and Liz Begley at ebegley@mac.com. 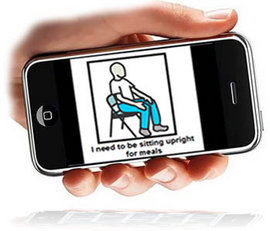 Dysphagia icons and videos are available through the Lingraphica and i-tunes app store at:

Related Applications are also available at: