I study transport (resistivity, Hall effect) and other properties (specific heat) of high-temperature superconductors in an effort to understand how these materials superconduct. My focus is on the normal-superconducting phase transition.

My previous research focused on the cuprate superconductor praesodymium cerium copper oxide (Pr2-xCexCuO4).  This research, funded by the National Science Foundation, included sample growth at the University of Maryland, sample patterning via photolithography at the Cornell Nanoscale Science and Technology Facility, and measuring the samples back in the Low Temperature Lab at Ithaca College.

Our current research focuses on the new iron-pnictide superconductor cobalt-doped BaFe2As2.  This research is also funded by the National Science Foundation, and again includes crystal growth at the University of Maryland and measurement at the Low Temperature Lab at Ithaca College.

Finally, our most recent line of work utilizes the new pulsed laser deposition system at Ithaca College and takes advantage of facilities at Cornell University.  Using the Cornell High Energy Synchrotron Source to generate intense x-rays, we are studying how thin-films are formed, one layer at a time.  I started this line of work during my sabbatical in 2012-2013.

Interested in what we do?  Take a look at  a movie made by Ithaca College Physics student Marco Salvaggio describing the research he did during the summer of 2007.  It's a must-see!  It clocks in at over ten minutes and about 20 MB.  If you'd like to see smaller portions, we've uploaded the movie in two parts on YouTube: Part 1, and Part 2.

One of the other aspects of our lab that we work on is outreach: How to bring superconductivity to a wider audience.  We made a cool movie about a superconducting levitation and suspension demonstration that physics Student Charlie Strehlow worked on.  It's another must-see!  It even has a roller-coaster track.  A lower-quality movie (thus shorter download) is here on YouTube also.  This work was expanded upon by another student, Arnold Kotlyarevsky, with a really cool figure-8 track.  Check it out!

My lab has been fortunate enough to be featured on a couple of television shows and interviewed for the radio.

On Nov. 9 2011, our outreach demonstrations were featured on The Colbert Report!   You can check out the segment here.

In May 2013, we were featured on the Travel Channel in a program about roller coasters of the future.  Will they levitate above and suspend beneath the track?  Find out here.

We were also interviewed on local radio WHCU about superconductivity.  You can hear the interview here. 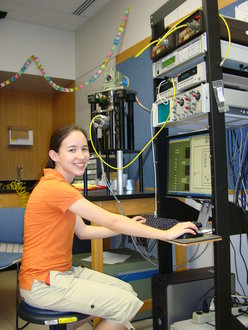 Emily Backus works on the data acqusition program for the cryocooler.