"Success At The Solo Festival," September/October 2008

“We Sing To Each Other by Dana Wilson,” Master class article & CD, September/October 2007

"A Guide For Memory Mapping For Learning Repertoire," March/ Aprili2005

A master class article on the Lennon Distances Within Me, including a compact disc with a performance of the work with piano accompaniment, a piano accompaniment with no solo part (play-along version), and master class commentary; July/August 1997
"Make the Metronome Your Friend," March/ April 1997
"A Recitalist's Checklist-Part I & II," November/December 1996 and January/ February 1997
"Heitor Villa-Lobos' Fantasia," July/August 1996

"A Practical Approach to the Single Reed Problem," December 1980 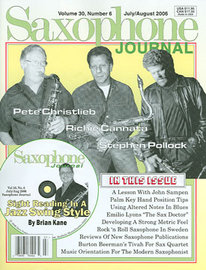