The Saxophone Studio of Steven Mauk  »

The Empire Saxophone Quartet is a unique chamber music ensemble. Its repertoire includes classical works from the Renaissance through Contemporary periods, as well as Pop, Jazz and Ragtime selections. The versatility of the saxophone allows this superb ensemble to emulate the subtleties of a fine string quartet, the power of a brass quintet and the grandeur of a pipe organ. Audiences are astonished by the diversity and artistry displayed by the ESQ.

The ensemble is comprised of Steven Mauk, Daniel Miller, April Lucas and Anthony Alduino performing respectively on the soprano, alto, tenor and baritone saxophones. Mauk is Professor of Saxophone at Ithaca College, while Miller serves as a performer and music educator in Spencer, NY. Both Lucas and Alduino are music educators and performers from the Binghamton, NY area.

Unlike many musicians, saxophonists are schooled in a wide variety of styles. All members of the ESQ have either masters or doctorate degrees from leading colleges and universities. Included in their training was in-depth study of both classical and jazz idioms. The ability to quickly shift from styles as divergent as renaissance and jazz is seldom found in more traditional chamber music ensembles. Such skills allow the ESQ to perform an incredibly wide range of music, which adds greatly to the entertainment value of their presentations.

Many consider the saxophone to be only a jazz or popular music instrument. This notion is being changed with each performance of the ESQ. Their ability to control dynamics -- ranging from the hushed pianissimo of a string quartet transcription to the driving forte of a Glenn Miller selection -- is remarkable. The subtle control of ensemble nuances, balance and intonation, coupled with the wide dynamic capabilities, make the Empire Saxophone Quartet a group of exceptional capabilities.

The ensemble has met with enormous success in a myriad of settings. The group has performed at concert series, arts festivals, parks, churches, public schools, art exhibits, colleges, music conferences, restaurants, and weddings, as well as with symphony orchestra and band. The experiences of its members, the high level of performance abilities and the entertaining presentations staged by the ESQ make them a group suitable for all occasions.

Steven Mauk (soprano saxophone) is the professor of saxophone at the Ithaca College School of Music. He holds degrees from the University of Tennessee and the University of Michigan. He has written several books and numerous articles about the saxophone and has many solo and ensemble recordings to his credit. A well-known soprano saxophonist, Steve has helped pioneer the development of this instrument as a solo voice. He has appeared in such locales as Moscow, London, Toronto, The Netherlands, Japan and numerous U.S. cities. mauk@ithaca.edu

Dan Miller (alto saxophone) is currently a music educator in the Spencer-Van Etten school district in Spencer, New York. He is a graduate of Syracuse University and Ithaca College. Dan is currently the president of the Tioga County Music Educators Association and regularly works as an adjudicator and teacher throughout the Southern Tier of New York State. As a saxophonist, he has performed with the Syracuse Society for New Music, the Binghamton Philharmonic, the Swing Street Dectet, Classy Brass, and the Mason Warrington Orchestra.  ADanIII@aol.com

April Lucas (tenor saxophone) performs as the principal saxophonist and bass clarinetist in the BC Pops, Binghamton Symphony and Tri-Cities Opera Orchestras. She maintains a private music studio and is the business manager of the ESQ. Currently a music educator in the Susquehanna Valley school district, April has also served on the faculties of Hartwick College and SUNY Binghamton. In addition, she is an active performer with the New Sousa Band, conducted by Keith Brion.  aprilleelucas@hotmail.com

Anthony Alduino (baritone saxophone) is a music educator in the Susquehanna Valley School District and an active musician in the Southern Tier. He has a woodwind studio for private instruction and has performed with the Binghamton and Syracuse Symphony Orchestras. Tony has recorded with the Rascher Ensemble, the Fredonia Saxophone Ensemble and the Saxophone Sinfonia. He is a former member of the Onondaga Community College faculty. aalduino@yahoo.com

The Empire Saxophone Quartet is an artist/clinician ensemble for the Selmer Company. 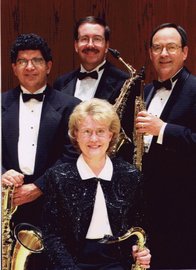