Professor Jolly researches the intersection of art and politics in modern Mexico.  She specializes in the work of the Mexican muralists, and has recently published on the work of David Alfaro Siqueiros and Josep Renau at the Mexican Electricians’ Syndicate.  Broader research interests include understanding the Muralists within the context of international politics of the 1930s, the intersections of art and technology, and the regional dissemination of Mexican Muralism.  Her book, Creating Pátzcuaro, Creating Mexico: Art, Tourism, and Nation Building under Lázaro Cárdenas, investigates the art--murals, sculptures, and their architectural settings--commissioned by Lázaro Cárdenas in Michoacan, Mexico, as part of a program of tourism development and national integration. Research for this project has been supported by a Fulbright and NEH Fellowship.  The book was awarded the Whitaker Best Book Prize from the Middle Atlantic Council of Latin American Studies (MACLAS).

Professor Jolly’s classes capitalize on and expand these interests.  Her intro-level course, Art Across Cultures, uses the geographical framework of the Americas to comparatively introduce students to the art of the continent’s varied cultures, ancient through modern.  At the 200-level, Pre-Columbian Art explores the arts of pre-conquest Mesoamerican and Andean America, and highlights some of the key methods art historians use to study these cultures.  Modern Latin American Art surveys 19th- and 20th-century art in Latin America, and provides ample opportunity for considering themes such as art and nation-building, the role of art and artists in social and political change, and what it means to be "modern" and "Latin American."   Latino Art focuses on art from the varied Latin American communities living in the United States and provides an opportunity for students to explore the potentials and limitations of art in community building, history-making, and identity politics.

At the 300-level, Art and Revolution in Latin America critically considers the role of art in post-revolutionary Mexico, Cuba, and Nicaragua.  The course asks “what is revolutionary art?” and “how can artists participate in the re-envisioning of a nation?”  A new course, Race and Representation in Latin America, examines changing modes of representation and ways of thinking about race in Latin America and the Caribbean, from the colonial period through the modern era. Professor Jolly also teaches a 400-level seminar, The Artist: a history of an idea.  This course allows students to critically examine the field of art history by focusing on our field's protagonist (and anti-hero), “the artist,” as a construct developed between the period of the Renaissance and contemporary times.  How have our changing ideas of what an artist should be helped shape the very task of being an artist, and how has this served to both obscure and enliven the history of art?  In 2014 she taught the department's Exhibition Seminar, and worked with students to curate an exhibition of Pre-Columbian art.  "As They Saw It: The Easby Collection of Pre-Columbian Art" opened at the Handwerker Gallery in Spring 2015. 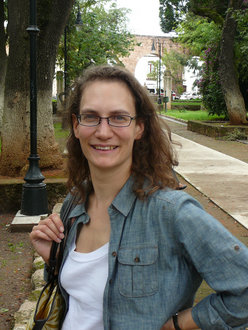