My research focuses on the intersection of gender, representation, and power in early modern Europe. My first book, Picturing Marie Leszczinska (1703-1768): Representing Queenship in Eighteenth-Century France, was published in 2015. I analyze the portraits of Queen Marie Leszczinska, arguing that they were integral to Louis XV’s assertion of power and authority as monarch. I have also published on the representation of Queen Anne of Austria (1601-1666) and Madame de Pompadour (1721-1764), as well as on the artist, Marie-Éléonore Godefroid. I am currently working on multiple projects focusing on eighteenth-century portraiture, including portraits by Jean-Marc Nattier and the portrait of Dido Elizabeth Lindsay and her cousin, Lady Elizabeth Murray, inspiration for the film, Belle (2013, dir. Amma Asante).

My courses take a visual culture approach to images and representations from both the past and the present. In Introduction to Visual Culture, we examine visual expression to understand and engage the culture in which these representations are produced and encountered. Students in the course develop critical thinking, writing, and viewing skills while discussing and examining images -- everything from fine art to advertising to television, film, and new media. Imaging Authority examines the way that rulers and political leaders are portrayed in light of concepts of gender, power, and authority. We begin with the Tudors (including Henry VIII and Elizabeth I), who ruled England in the fifteenth and sixteenth centuries, then look at the imagery of the Bourbon monarchs in seventeenth- and eighteenth-century France. The course concludes with contemporary political representation in the United States with particular emphasis on the presidency. Gender and Visual Culture looks at a wide variety of representations in relation to the issues of gender, race, class, and sexuality. We contextualize images within particular historical and cultural formations in order to analyze the beliefs, assumptions, and attitudes held by the creators and shared or resisted by those who view them. I also teach upper-level courses on art history, portraiture, material culture, and fashion. 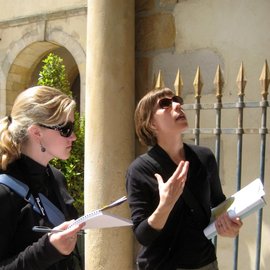