Most students enrolling in my classes finish the semester with a confident smile.  I make an attempt to keep all my classes interesting, engaging and challenging. Regardless of the class, all students will find themselves working on projects that will help develop their skills and expand their knowledge of the industry.

Before teaching at Ithaca, I worked for the ABC television affiliate, NewsChannel 9, in Syracuse, NY for over fourteen years as a producer/director, supervisor and other positions. During those years I produced over a thousand TV commercials, at least eight telethons, and various special projects. I continue to work as a freelance video producer/director in central New York.

If you would like to see examples of my students' work, click on the "Documents" link above left.

* Inside the Edge, (documentary)

Courses previously taught at other schools: 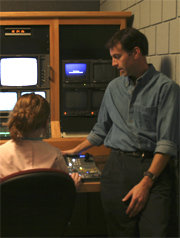