Known for her elegant conducting style and efficient and engaging approach to rehearsals, Hana J. Cai is a conductor, pianist, and singer based in Ithaca, NY.  She currently serves on the faculty at Ithaca College as an Assistant Professor of Conducting in the Performance Study Department.

As a conductor and singer, Hana served as the assistant conductor for Singing City under Jeffrey Brillhart and as a member of the Philadelphia Singers Chorale and PhilHarmonia.  She has performed regularly at the Kennedy Center and the Kimmel Center under the batons of Christoph Eschenbach, Helmuth Rilling, Matthew Halls, Alan Gilbert, and Gianandrea Noseda.  In Rochester, she proved herself tantamount among the ranks of emerging choral conductors.  While concurrently earning her degree at the Eastman School of Music, Hana served as the music director of the Mount Hope World Singers and sang regularly with the professional chorus Voices.  She made her Canadian debut in January 2017 with the Toronto Mendelssohn Choir and the Elora Singers as one of the five conductors selected to participate in the Choral Conductors' Symposium.  At Indiana University, she was one of three conductors selected to assist with preparing the chorus for a performance of the Penderecki St. Luke Passion where the composer was in attendance.  She also served as the associate chorus master for the university premiere of Mason Bates' The (R)evolution of Steve Jobs and Wagner's Parsifal for the Indiana University Bicentennial.  In March 2019, Hana was the winner of the ACDA Graduate Student Conducting Competition in Kansas City, MO.  She has presented her research on tokenism at the Indiana Choral Director's Association and the ACDA Central and North Central Division Conference in Milwaukee, WI.

Hana's classical approach to teaching music, theatricality, and keyboard ability have also made her a popular music director with amateur and professional theaters alike.  A dedicated educator, Hana has worked in many local area high schools and community theaters, including for the historic Prince George’s and the Delaware Children’s Theaters.  In Philadelphia, Hana served as a music director, accompanist, and vocal coach in the Department of Theater at Temple University, including for the acclaimed production of Hair.  In Bloomington, she served as the music director for The 25th Annual Putnam County Spelling Bee with Indiana University Summer Theatre and the assistant music director under Lawrence Yurman for Stardust Road as part of the Indiana University Bicentennial, directed by Susan H. Schulman.  Other projects include The Christians, Beauty and the Beast, and Disney's Newsies for Cardinal Stage, Bloomington's professional theater company. 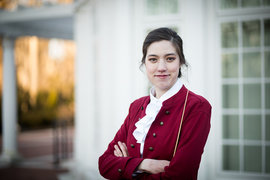