Mezzo-soprano Dawn Pierce is a native of Olean, New York, and currently an assistant professor of voice at Ithaca College. Praised as both an exceptional performer and an empowering teacher, Ms. Pierce is devoted to promoting a deeper understanding of artistry and self-expression. Reviewers laud her as “vocally impressive and dramatically convincing,” while students describe her teaching as “creative,” “energetic,” and “inspiring.”

Ms. Pierce abounds with experience in a wide variety of styles and venues. On the operatic stage, she recently performed Olga in Eugene Onegin with Opera Carolina, Marthe in Faust with Lyric Opera Baltimore, Lola in Cavalleria Rusticana with Opera Tampa, and Madelon and Bersi in Andrea Chenier with Nashville Opera. In the summer of 2013 she will sing the title role in Carmen at the Southern Illinois Music Festival. Ms. Pierce is equally comfortable in musical theatre, where she portrayed Franca (The Light in the Piazza), The Grand Duchess (The Student Prince), and Anita (West Side Story). On the concert stage, she has earned rave reviews for her interpretation of the alto solos in Verdi's Requiem and Handel's Messiah. Recently, she delivered a moving performance as the featured soloist in Elgar's choral-symphonic work, The Music Makers, at Hamilton College.

An innovative recital programmer, Ms. Pierce performs frequently in collaboration with great artists such as Charis Dimaras, Emily Newton, and Anna Steenerson. Ms. Pierce most recently presented Written in My Heart, an interactive recital exploring standard operatic literature in conjunction with technology, fine art, literature, and audience participation. In 2011 she presented My Native Land, a non-traditional, solo recital featuring five commissioned works and exploring American genres, including folk, art, opera, musical theatre, and spirituals. Other programs include The Soprano Sisters, a humorous, narrated program exploring the mezzo-soprano relationship in opera and musical theatre, and Your Opera in a Trunk, a one-hour, improvised opera with plot and characters determined by audience suggestion.

A versatile educator, Ms. Pierce has experience as a private teacher, musical director, and master class presenter. In addition to teaching vocal technique, dramatic intention, musical interpretation, and body awareness to undergraduate, graduate, and young professional level singers, Ms. Pierce encourages her students to perform frequently and at a wide variety of venues, from professional establishments to local retirement communities. Additionally, in 2011 and 2012 she taught at the Summer Music Academy in Ithaca, NY, where she served as a private voice instructor, master class presenter, and workshop lecturer for high school students.

Not only is Ms. Pierce deeply committed to teaching healthy vocal technique, but she is equally invested in both the artistic and personal growth of young artists. For more than ten years, Ms. Pierce has designed numerous entrepreneurial workshops and programs examining a variety of issues related to artistry and technique. In 2010, she founded the Ithaca Opera Studio in Ithaca, NY, and presented a variety of workshops designed to create well-rounded singers at the collegiate level. Recent topics include acting, score preparation, fitness, nutrition, mental well-being, effective practice skills, and recital preparation. Ms. Pierce has also designed curriculum for and presented master classes in audition techniques and improvisation for singers.

Ms. Pierce has training in a number of dance styles, stage combat, and opera improvisation. She earned a Performing Artist Certificate and a Master's in Opera Performance from the University of North Carolina School of the Arts and holds Bachelor's degrees in Vocal Performance and Music Education from Ithaca College. 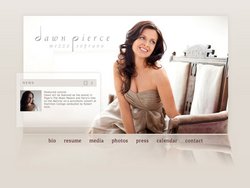