For years my teaching and research was centered in the Restoration and Eighteenth Century, and my books (The Imperial Dryden: The Poetics of Appropriation in Seventeenth-Century England and France, [Athens: University of Georgia Press, 1994]; "Onely Victory in Him: The Imperial Dryden," in Literary Transmission and Authority: Dryden and Other Writers, [Cambridge: Cambridge University Press, 1993]; and Fiction and Friction:  Sex, Text, and Envy in Dryden's Comic Drama) examine the ways English playwrights’ reading of French poetry and dramatic theory reflect and refract national modes of appropriation.   I also worked on and ran courses in the origins of the novel, and women writers of the Restoration and Eighteenth Century.

Yet after a Fulbright teaching American literature in Lima, Peru, my interests became more comparatist and less period-centered, and my teaching now ventures more widely across time, theme, and region. 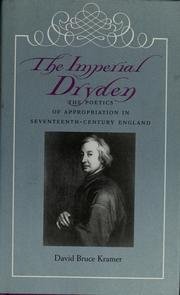