Pasquino, Rome’s legendary talking statue, comments on the Eternal City, past and present. For five centuries, Romans have posted squibs on his pediment, located in a tiny square near Piazza Navona behind the Museo di Roma. The English word “pasquinade” derives from his name.

I stand in a small square at the end of Via del Governo Vecchio, a stone’s throw from Piazza Navona. Poised on blocks of ancient concrete, I lean against a corner of Palazzo Braschi, home to the Museo di Roma. In a city of splendid antiquities, I am a pathetic fragment: a limbless torso with a battered face. Nevertheless, I am the Eternal City’s most enduring monument to sarcasm.

I began as a block of travertine, quarried at Tivoli during the Second Punic War. I yearned to be an arch, an aqueduct, or even a humble milestone, but fate sold me to a provincial magistrate, who had lost his son at Cannae and ordered me carved into a statue of Menelaus cradling the body of Patrocolus. For seven generations, I remained in the cypress grove at his villa in Laurentum, until the Octavian proscriptions wiped out his posterity and brought me to Rome.

The Caesars used me as a punitive white elephant. Whenever a general lost a battle or a governor bilked a colony, the emperor delivered me to the offender’s estate, accompanied by a brutally ironic thank-you note. The recipient usually committed suicide. When Domitian, however, became displeased with the entire city, he placed me over the arcade of his new stadium as a warning.  Four centuries later, the Vandals toppled me from my niche, smashed my face, lopped off my arms, and buried me in a ditch. There I lay for a thousand years.

On April 1, 1501, while excavating the foundations of Palazzo Orsini, Donato Bramante found me amid a heap of imperial rubbish. Delighted, he brought me to his patron, Cardinal Oliviero Carafa, who placed me on a pedestal at the corner of Via del Paione and invited all Rome to admire me. On St. Mark’s Day, His Eminence consecrated me to Momus, the Greek god of mockery. He placed a carnival mask on my face, draped me in a toga, and decorated my pedestal with Latin epigrams.

Such pranks were common on Via del Paione. The street was the parade route from St. Peter’s to the city center. Practically every month was a carnival, so no one was surprised when I began displaying anti-clerical squibs. The culprit was Paquino Mazzocchi, a cousin of the famous printer and a local tailor, whose wit was as sharp as his needle. Since his trade often took him to the Vatican, Pasquino knew the most delicious gossip. After his death, I assumed his name and became a bulletin board for anonymous satiric poems, called pasquinades in his honor.

Authorities were outraged. Pope Adrian VI vowed to throw me into the Tiber but was dissuaded when the Curia explained that, like a frog, I would croak only louder in water. Charles de Bourbon, whose German mercenaries had sacked the city, threatened to decapitate me. If he tried, military aides said, some wiseacre would substitute a Jack-o-lantern for my head. Church and state were powerless. Made of stone, I could be neither excommunicated nor executed.

For the past 450 years, I have been Rome’s tribune of free speech, criticizing Braschi and Bonaparte, Pio Nono and Victor Emanuel, Giolitti and Mussolini, Andreotti and Berlusconi. I have never betrayed my office and have survived the Four Horsemen of the Apocalypse: war, urban renewal, advertising, and tourism. Three years ago, however, Mayor Gianni Alemanno stripped off my lampoons and scrubbed and bleached me a virginal white. Henceforth, he decreed, all my notices will be posted on sideboard mounted on a Lucite stand. Supposedly, this edict insured my preservation. Actually, it made it easier to clean up and stifle protest.

I could not work under these conditions. After consulting with my beloved colleagues, Marforio, Madama Lucrezia, Abbot Luigi, Il Babuino, and Il Facchino, I decided to start a column in San Francisco's L'Italo Americano, the oldest Italian American weekly in the United States, and hired Professor Di Renzo as my secretary. I appreciate his willingness to take dictation from an armless ruin and am pleased to share our work on his website. 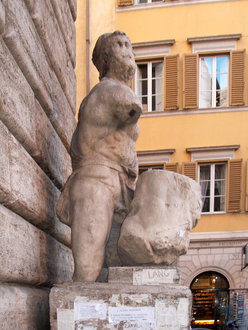 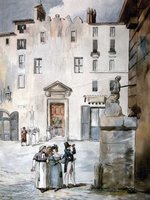 Headline of the January 27, 1856 issue of Il Pasquino, a satiric magazine popular in Italy before and after Unification