"Far and away the best creator and professor of eloquence is the pen; and it is not hard to see why. For when we really invest a great deal of work and concentration in an argument, then all the evidence we could possibly need for what we want to say (facts and examples derived from our studies or from the natural workings of our intelligence) will automatically surge forward and present themselves ready all ready for use. That is how to make all the most brilliant thoughts and expression crowd on the point of a pen like water spurting from an aqueduct."

ALONG THE APPIAN WAY

Perhaps my love for classical rhetoric is ancestral. My paternal name derives from Laurentum, the original capital of Latium, where Aeneas sought refuge from his epic wanderings. By the time of the Caesars, this laurel-shaded retreat had become a prosperous if sprawling suburb for lawyers, civil servants, and engineers. My maternal side of the family is from Sicily, the birthplace of Western rhetoric. All Sicilians are incorrigible and word-drunk sophists—from Empedocles, who convinced himself he was immortal before jumping into Mt. Etna, to Guido the used car salesman, who insists he sells only the best "pre-owned" vehicles.

Clearly, the Roman tradition, both solemn and sarcastic, remains valid and instructive for contemporary writing students—particularly in these days of imperial pride and Neronean excess. If only Tactius anchored the CBS news and Horace hosted Late Night! 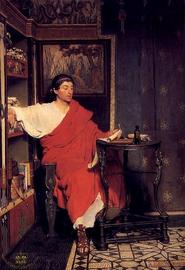 Let us seek wholeheartedly that true majesty of expression, the fairest gift of the gods to mortals, without which all things are struck dumb and robbed both of present glory and the immortal acclaim of posterity."