From "A Load of Tripe"

Some mothers liked to window-shop at Macy’s; my mother, an overworked seamstress, liked to imagine the fancy cuts she could buy, if she weren’t limited by a shipping clerk’s meager salary.  Back then, Brooklyn had almost as many Italian butcher shops as Catholic churches, so Mamma had her pick.  For simple orders, she would dash to La Rosa’s Meat Market, the local butcher on 55th Street under the New Utrecht el.  For a change of venue, she would visit Frank and Sal’s Prime Meats, still standing on Cristoforo Columbo Boulevard, the heart of Italian Bensonhurst.  But for the best cuts and the most variety, not to mention a fine pretext for visiting Nonna Agata on 80th Street, Mamma would return to her old neighborhood in Dyker Heights, to Priolla’s on 13th Avenue.

Bustling, crowded, and ornate, Priolla’s was pure guinea Baroque, a flamboyant study in contrasts.  Spotless display cases clashed with the blood-soaked sawdust, while a strong miasma of Old Spice after-shave failed to camouflage the pervasive smell of offal.  On the wall, an anatomized map of Italy complemented an atlas-sized meat chart; on the counter, a framed Sacred Heart stood beside an autographed picture of Ernest Borgnine as Marty: “To the Priolla brothers,” read the inscription, “a cut above the rest!”

The Priollas served a mostly Sicilian clientele.  Raised in Catania, Sicily’s enterprising Second City, they were born hucksters and formed a perfect team. Affable and cleft-chinned Johnny, the Adonis of 13th Avenue, handled the deliveries; brainy and soft-spoken Vinny supervised the accounts, produced the circulars, and later drifted into advertising; but bossy and beefy Paulie punched the cash register and worked the scales. When he sharpened and flourished his knives, he could be as intimidating as Toscanini warming up the NBC Symphony, so few customers besides my mother contradicted him. For all that, he ran a jolly shop. As the neighborhood’s most eligible bachelors and the local business association’s live wires, the Priollas flirted with the prettiest girls and clowned behind the counter. Their outrageous horseplay crossed the zany anarchy of the Marx Brothers with the ritualized kabuki of Benihana.  During Lent, for example, the Pirollas tenderized meat while chanting the liturgy:

This bit scandalized the more pious matrons, but it made perfect sense to me. After all, wasn’t Christ the Lamb of God, and didn’t we eat lamb for Easter, preferably with rosemary? And how the Priollas treated a slab of meat was nothing compared to how the Roman soldiers had treated our Savior. On the life-sized crucifix outside Santa Rosalia, our parish on 63rd Street and 14th Avenue, Jesus hung like a side of beef. But the Priollas weren’t being profound. They were hazing their junior butcher, Carmine Vaccaro.

An ex-seminarian and a part-time martyr, Carmine operated Priolla’s Bone Yard, a refrigerated glass case packed with spongy sweat breads and glistening kidneys, coral-pink calf brains and bleeding hearts. Shy but intense, with an ascetic, melancholy face El Greco could have painted, he must have suffered from thyroid problems.  His eyes bulged, and he habitually sucked coarse butcher’s salt. After bolting from St. Joseph’s Seminary in Yonkers, Carmine still attended daily mass and recited novenas to St. Luigi Gonzaga; but he considered Cardinal Francis Spellman, who had dedicated St. Joseph’s recreation center, a glorified Rotarian. Well, at least he had eaten well. “Chi se vo' impara' a magna', da li preti bisogna che va,” Carmine once claimed, quoting a Roman proverb: If you wanna learn how to eat, you gotta go to the priests. To which Paulie retorted: “’U Spiritu Santu nun abbotta.” The Holy Spirit don’t fill your belly.

Despite this ribbing, Paulie valued Carmine. His father, uncles, cousins, and grandfathers had worked in the Mattatoio, the great slaughterhouse of Rome’s Testaccio district, so Carmine possessed an encyclopedic knowledge about organ meats. Nobody else knew more recipes for ox tail and knuckle bone or more ways to salvage week-old liver. His kindness and tact won the hearts of poor pensioners and struggling young housewives.  Even when coated with gore, his hands were as delicate as a jeweler’s.

The other customers laughed. From the case, Carmine removed something about the size, shape, and texture of a deflated soccer ball and placed it on the scale. When the gelatinous mass quivered, I grimaced. “Cow guts,” Carmine explained.

Smiling bleakly, he slit open the bladder with a small paring knife and motioned me closer. The insides smelled worse than old sneakers but were as delicately brocaded as Mamma’s wedding dress. Carmine invited me to stroke it.  “See?” he said. “That’s all we are, kid.  That’s all God is. We’re born between piss and shit.”

Later, when I learned Latin in Christian Brothers Academy, I would realize he had quoted St. Augustine: “Inter faeces et urinam nascimur.” We are born between feces and urine, and yet with an immortal soul. But for now, I was struck by the awe and irony in his voice.  What was this stuff? I wondered. 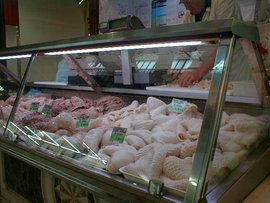 "Inter urinas et faeces nascimur. We are born between piss and shit."