From "Exiles from Cockaigne"

Swaddled in cheesecloth and wrapped in two layers of foil, three Italian sausages, which in my haste I had forgotten at my mother's over Christmas, arrived in a shoebox on the last day of the year. They had traveled three hundred miles by first class mail, as weary as the Magi, attended by two pages, a pair of fur-lined slippers. I put on the slippers and heralded their arrival: "All hail the three kings!"  I hummed a fanfare and removed them from the box. These sausages were indeed royalty—the imported Abruzzese sopresssata of my childhood, prized for its rarity. Beating a tattoo on my thigh, I slipped two sausages under my arm like swagger sticks. Using the third as a baton, I marched around the apartment, a bantam on parade, followed by my wife and a procession of cats. The chimes in the living room rang in jubilation as I bowed before our tiny crèche.

I knelt before the stable, a reverent giant, and presented the sausages to the Christ Child. If the sausages had been smaller, or if the crèche had been larger, I would have placed them directly at Jesus' feet. But the sausages were 18 inches long. According to the scale of the crèche, that meant each sausage to the Christ Child measured 45 feet. What baby could eat that? I thought of another Nativity—that of Pantagruel, the son of Gargantua. According to legend, before the baby giant was born, a caravan of deli products preceded him out of his mother's womb: 68 mules carrying salt blocks and baskets of peppercorns; nine dromedaries loaded with sausages, hams, jerky, and smoked tongues; seven camels packed with anchovies, sardines, creamy herring, and salted eels; 24 cartloads of garlics, scallions, capers, onions, roasted red peppers, and pickled artichoke hearts.

But the little tin Jesus in the manger was no giant. He was a mass-produced Christ Child in an American crèche, his stunted appetite fit only for Gerber's. It was a sin, but the only thing to do with those 45 foot sausages was to eat them myself.

I reverently unwrapped the largest sausage and cut myself a slice. It was hot and spicy, but that wasn't the reason tears ran down my face. Three years had passed since I had last tasted such joy. Three years. That was the last Christmas I had spent with my parents and my sister. Since then, I had practically become a vegetarian, for reasons that will become clearer; but here I was, a shameless carnivore again, and I ate slice after slice after slice. My smacking lips formed the magic word of my childhood: cuc-cag-na, cuc-cag-na. Cuccagna means plenty, abundance, bonanza. It also means Cockaigne, the peasant paradise of Medieval and Renaissance Europe that later, during the Golden Door period, became the immigrant nickname for L'America. Cuccagna is the Brueghel inside your mouth: the land where mountains are ricotta, the rivers wine, and spaghetti grows on trees. It is ruled by King Bugalosa, an ogre who farts manna and spits marzipans. Instead of lice, there are fish in his hair. He lives in a palace made of cold cuts. The banners on his battlements are gigantic sausages.

My chewing slowed down. The wave of joy which had buoyed me was washing out to sea. I didn't know when I would taste cuccagna again. More to the point, I didn't know if any of my children—if I ever have children—would taste cuccagna either. I chewed and chewed, and it was like chewing my own heart. In that moment of full-bodied satisfaction, of reconciliation, I had tasted my own death, and the death of all that I love. And all because of an Abruzzese sausage. It wasn't a subjective reaction so much as an archeology of tastes. Time and history are literally a matter of sausages to me. They have been the milestones of my life---not just of my individual life, but of my collective life: my life as a member of a vanishing culture. Whenever I read a scholarly book that presumes to explain "the Italian American experience" through charts and statistic, I feel like I'm eating straw. "Yes, yes, yes," I huff, "but have you tasted Abruzzese sausage over the years?"  Believe me, you can learn more about the heartbreak and horror of assimilation from sopressata than from any book. I've seen this particular kind of sausage go from being a staple, to a treat, to a delicacy, to a swindle in less than thirty years. The phenomena is a minor tragedy in the history of my people—a minor tragedy, but a telling one.

During my childhood, all the salumerias, the Italian delis in the Metropolitan area, carried Abruzzese sausages. We could find them everywhere: Manhattan, Brooklyn, Queens, Long Island, Hoboken, Neptune, Camden, Philadelphia. They were part of the pride and pageantry of the neighborhood delis. During religious holidays, the display windows of these salumerias resembled the Triumphal March in Aida: black and green olives arranged like foot soldiers; oil and wine flasks, decorated like war heroes; cavalries of canned goods on miniature Sicilian donkey carts; Parmesan cheese wheels rolling like tanks; submarines of mozzarella in tanks of milk; festoons of zamponi, cacciacavalli and provoloni; triumphal arches of prosciutti and mortadelle; and finally, our standard bearers: the Abruzzese sausages. They were as proud as the statues on Easter Island, monoliths convinced of their own immortality. They didn't hear the admonitory fly buzzing in their ears that all glory is fleeting. We didn't hear it either. For us, those sausages were the food of the gods. Who listens to flies during times of plenty?

Not three days went by without my father bringing home another roll of sausages. We ate them with Italian bread, with eggs and peas, with broccoli and garlic, with cheese and olives. Sometimes there was an extra blessing. My Abruzzese relatives, riotous mountaineers with thick thighs and coarse laughs, would send us homemade sausages from the Old Country. These were frequently accompanied by graphic but playful accounts of the slaughter that made the sausages possible. Homer in his mock-heroic poem sings of the battle between crabs and mice. My relatives, poets in their own right, sang of the battle between peasants and pigs. It was a close battle, one in which the pigs had a fighting chance. That fact alone made the sausage succulent. It's one thing to eat a boon companion with whom you've played and wrestled. It's another thing to eat a stranger whose life has been a series of degradations. Most American pigs are convicts in a mechanized gulag—but I'm getting ahead of myself . . . 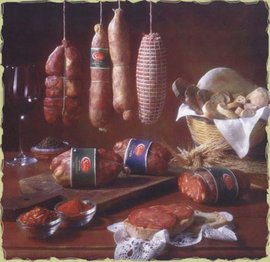